A few months ago, we reported on how the all-electric Chevy Bolt EV has the opportunity to take away VW Golf GTI’s “hot-hatch” crown based on impressive performance in the segment.

GM seems up to the challenge and invited us to test it out at an autocross event last week.

Full disclosure: the automaker paid for my transport, lodging, and fed me during my stay in Detroit (thanks!).

They brought a bunch of automotive journalists to an empty lot just outside of Detroit where they set up an autocross track.

We were let loose on the track for 3 hours with 3 Bolt EVs (2 with summer tires and 1 with all-season tires) and a Golf GTI for comparison.

The conditions started out less than ideal as we arrived early in the morning and rain from the last night left the pavement a little wet.

Fortunately, that cleared out quickly and we had plenty of opportunities to burn some tires.

It was my first autocross event and I doubt I could have asked for a better car to introduce me to it. Unsurprisingly, the Bolt EV is an incredibly stable vehicle thanks to its low center of gravity due to its large battery pack between the axles. Despite the added weight and surprisingly spacious interior, it’s nimble enough to handle some sharp turns on the course.

The 0 to 60 mph acceleration in ~6.5 seconds is not incredibly impressive compared to a high end hot hatch or a Performance Tesla, but the track was intelligently laid out so that we couldn’t reach such speed anyway – yet we could take advantage of the instant torque of the electric motor with 200 hp and 266 ft-lb of torque – which is some serious power for a Micro-Crossover, as Chevy likes to call it.

Here’s a quick video of a run by Sean O’Kane from The Verge to give you an idea of the track:

Undoubtedly a lot of fun to drive. The car is so solid on its wheels that you have no fear to push it hard on turns and slalom.

For comparison, GM brought a Golf GTI to the track and I felt way more confident driving the all-electric vehicle. I did only one run in the GTI and instead focused on getting some fun time with the Bolt EV. But others gave the GTI a shot and surprisingly, the times were extremely comparable with those in the Bolt EV. 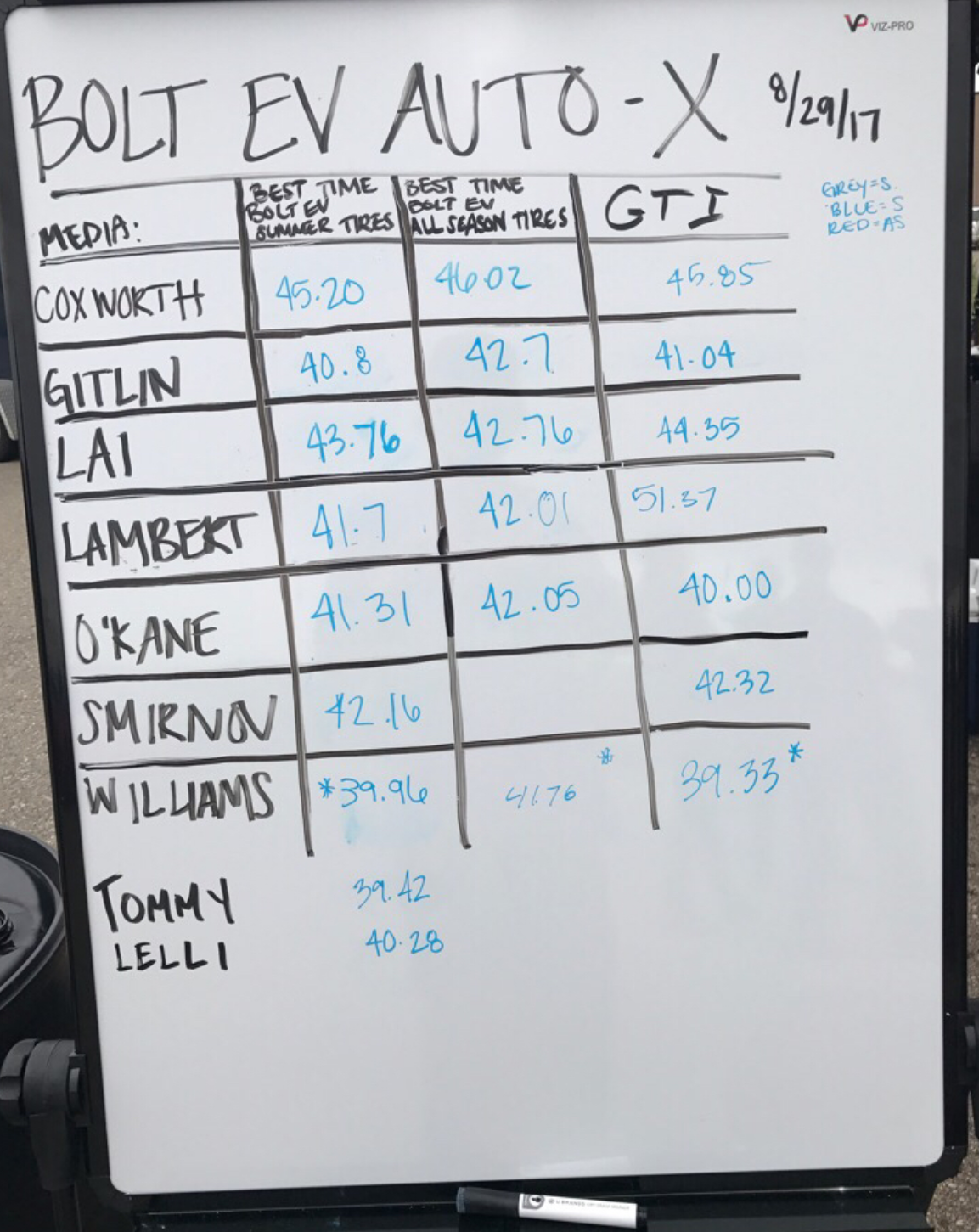 After 3 hours of almost continuously pushing the vehicles, they hold up surprisingly well. Of course, the tires were done, but the battery packs were doing great.

As a reminder, the Chevy Bolt EV as an EPA-rated range of 238 miles, but the automaker claims that most owners gets more out of a charge and it’s not hard to believe.

That was after several hours of pretty inefficient driving as you would expect on the track: 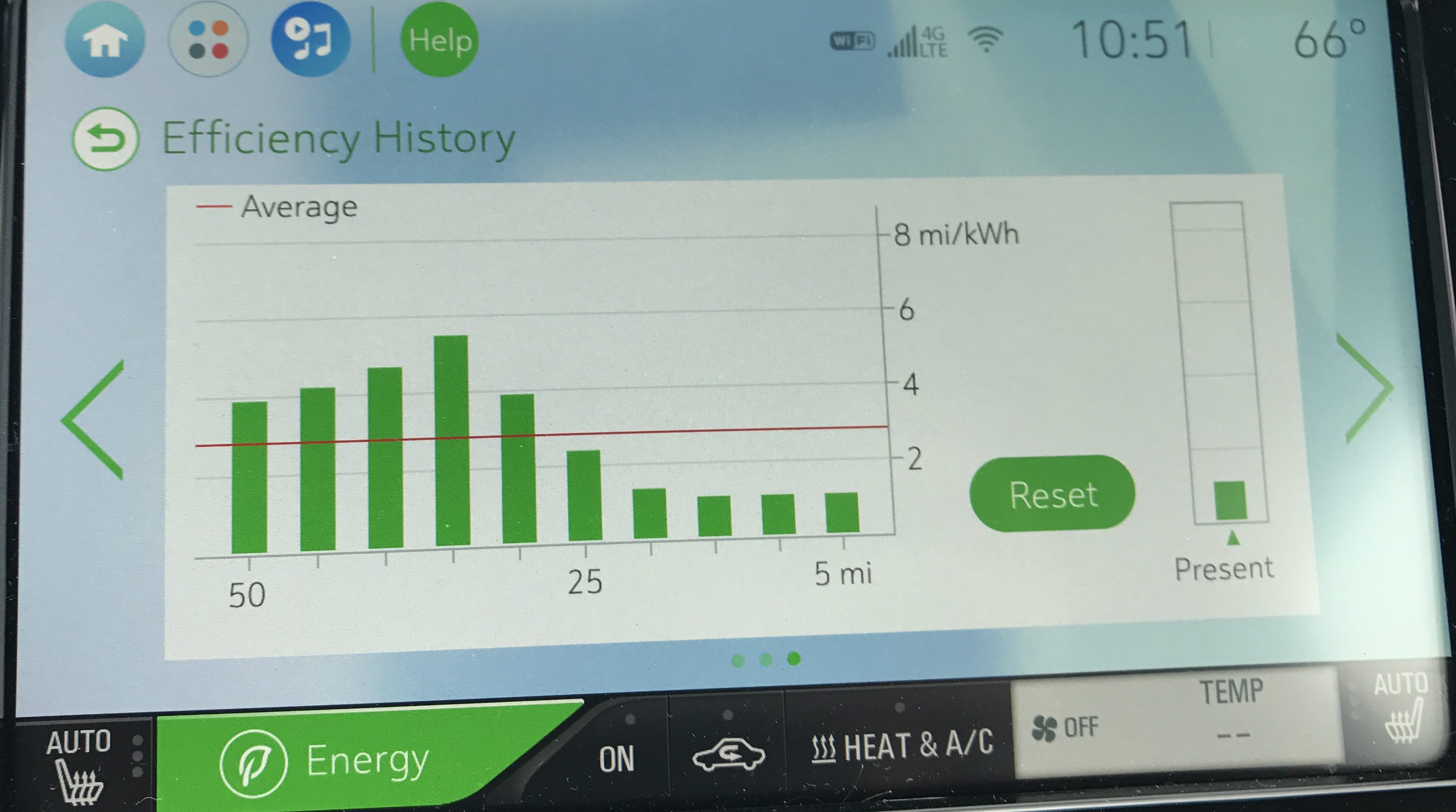 It’s actually a great example to show that people shouldn’t care that much about range. We drove those cars like insane people and yet, you can still easily get another 2+ days of the average commute in those vehicles.

Overall, it was a great experience and an interesting way to get familiarize with the Bolt EV. Count me in as a fan of the driving experience.

In the way that drag races have done wonders for the popularity and the credibility of the Tesla Model S over the last few years, I could see autocross events like this having a similar impact for the Bolt EV.

Now GM just needs to get the car in the hands of more customers. As we recently reported, Bolt EV sales are steadily moving higher with national availability, but they are still only at about ~2,000 per month in the US and inventories are not exactly well-distributed.

It can still be difficult to get your hands on one in certain markets, while in other markets, like California, there are decent inventories and some customers have been getting away with paying less than $25,000 after incentives due to discounts. We have seen prices as low as $19,000 and leases for ~$200.

You can always check with your local dealers for inventory and see if you can find a deal.