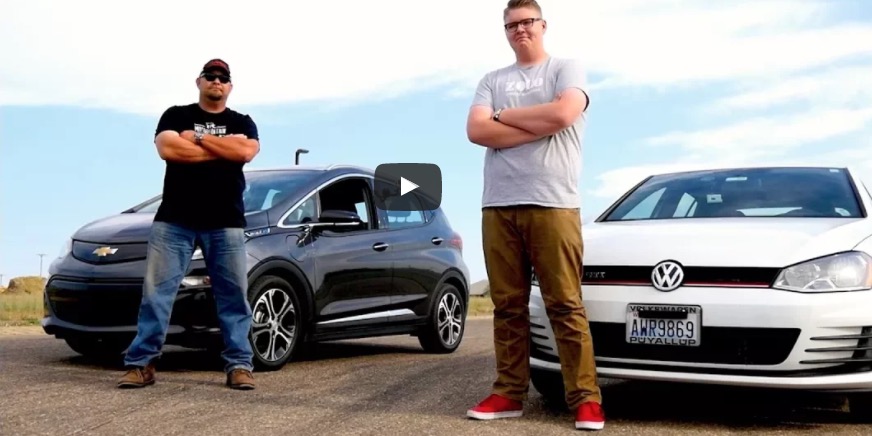 A lot of folks have a big problem with the $30,000 base price (after $7500 incentive) of the Chevy Bolt when compared to ICE cars of the same class. I’d argue that comparing a Chevy Bolt to $20,000 Honda Fit or Ford Fiesta or Volkswagon Golf or even Chevy’s own Cruze hatchback isn’t fair. After all, the Bolt has 200 electrified horses under the hood with torque to match and at the very least, the Bolt should be compared with more expensive “hot hatch” versions of those cars which usually run about $10,000 over their base counterparts.

In a drag race this week, the Chevy Bolt was pitted against the reigning king of the Hot Hatch genre, the Volkswagon Golf GTI…

Sure the Volkswagon GTI has a 0-60 time of under 6 seconds compared to the slower Chevy Bolt time of “6-ish seconds” but that EV power off the line is always going to win out the first few seconds.

The Bolt clearly beat the $26,600 – $33,000 GTI in at least 2 of the 3 races (the 3rd was a dead heat after a curious start) in this clearly unscientific race at TheFastLAneCar.com. The Bolt sits higher but has comparable horsepower and torque compared to the GTI so that leaves the electric drivetrain as the winner.

It  should be noted here that 0-60 times on gas vs. electric are different in  one area that most people underestimate. I gun my EVs all the time even with people in the car. If I did the same thing in an ICE like the GTI, passengers would freak out with the huge engine revving and the jolts as the cars pass through the gears. I promise you that the same Bolt buyer as a GTI buyer will actually use that 0-60 time way more often.

The greater point again here is that you can’t compare the Chevy Bolt EV against base model hatchbacks (100 HP Nissan LEAF makes more sense here). To get more apples to apples comparison, you have to compare the “hot hatch’ models which compare more evenly with the $30,000 mark that Chevy has hit.  That is, unless you consider the tons of other added benefits of EVs including cheaper cost of electricity vs. gas/mile, less wear on brakes, no oil changes, less maintenance, smoother/quieter ride, no fumes, no gas stations…