While it remains a niche market with less than 2% market share in most countries, everything points to electric vehicles becoming mainstream and disrupting the auto industry in a big way sooner rather than later.

But the timing is still being strongly debated with predictions all over the place.

Now a new report puts the target for 1 billion electric vehicles on the roads by 2050 and predicts some tough times for automakers leading up to the milestone.

They explained how they arrived at 1 billion electric vehicles on the roads by 2050:

The change is being driven by the falling cost of building electric vehicles. Morgan Stanley sees them reaching parity with gas-powered cars around 2025: 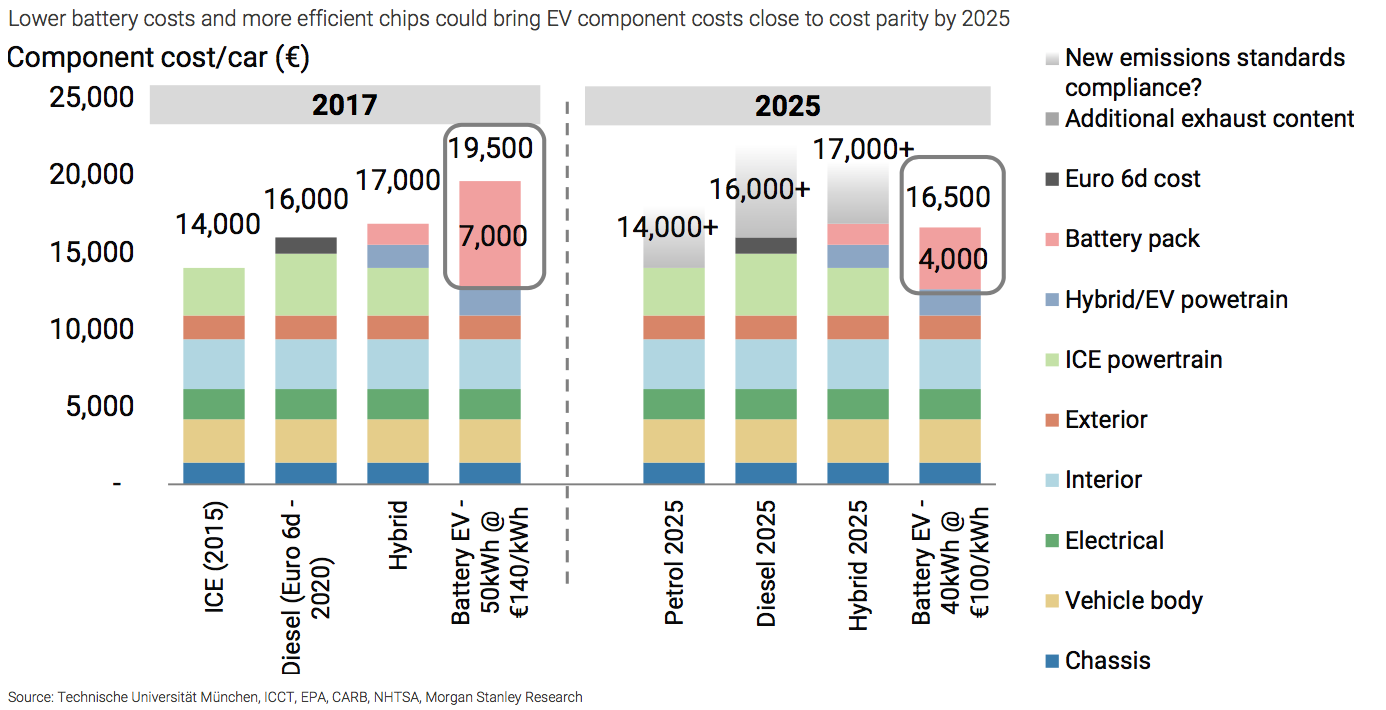 In the paper, the analysts highlight how that transition will be difficult on existing automakers:

“For the OEM business model , BEVs are a game changer. Up to 50% of the value of the car could migrate from mechanical to electrical systems and electronics, and this transfer of power could challenge OEMs’ competitive position, branding and pricing. Our modelling of an illustrative OEM transition from ICE to BEV drivetrain suggests that price and volume pressures could push down ICE profitability sharply from 2021, as new BEV products cannibalise sales and pricing power, with potential for losses from 2028. BEV losses peak in our model in 2023 before production ramps on new model launches. The range of profitability outcomes is wide.”

That’s a tough position to be in for companies and most of them apparently don’t want to be in it.

Morgan Stanley suggests that the transition is being pushed by emission regulations and as we previously reported, virtually all automakers (except for Tesla) have been lobbying against the new fuel consumption standard in the US and more recently, also against the ZEV mandate in China.

The analysis also predicts some tough times through the transition for auto suppliers. They wrote:

“Margin pressure is likely to be passed down the supply chain. Moreover, OEM suppliers for the powertrain, transmission and fuel systems face loss of content – much of the electrical / electronic systems in an BEV could be supplied by new competitors. On the other hand, technology change and outsourcing are typically opportunities for OEM suppliers.”

We have recently seen some of them adapt with new EV business units, like Bosch, Continental, and GKN Driveline.

Now even if they are wrong by 50%, this is still some major disruption for the industry, but as I wrote in the past, I even think most of those forecasts are too conservative. Though Morgan Stanley keeps updating theirs lately and it looks like they are now becoming more accurate.

Once all-electric powertrains, due to the falling cost of batteries, reach cost parity with internal combustion engines before accounting for cost of operation (gas and maintenance savings), there will be virtually no reason for buyers to want gas-powered cars over battery-powered cars.

At that point, automakers will have to divert all their investments to electric vehicles. As we recently reported, even the major automakers most forward thinking about EVs are still investing more in gas-powered car R&D than electric vehicle R&D: VW is spending $10 billion on EVs over $22 billion on other cars.

Therefore, it becomes about predicting when that point is reached and then how long it will take for automakers to convert all their manufacturing capacity to electric vehicle production.

Based on current battery cost trends and current investments in electric vehicles, I have been predicting that point happening between 2020 and 2025. Now it looks like Morgan Stanley is on board for ~2025.

After that, it’s more difficult to predict how long it will take for the industry to build the supply chain around EVs, but considering there’s already a lot of work being done on it now, I doubt it will take more than 10 years. That’s where Morgan Stanley’s projections diverge with still 20% of new vehicles being gas-powered 25 years later.