I have been driving my Signature 2012 Tesla Model S P85 for the past 3 months now. After my initial impression of the vehicle and Tesla’s certified pre-owned process, I’m now ready to go a little more in-depth about how an original Model S holds up almost 5 years later.

Let’s get right into it.

The first thing I’m sure most people want to know about is ‘how does the battery pack hold up?’ and it’s a fair question.

While we often look at mileage more than age to determine how a battery pack holds up, they can both have an effect on its performance over time.

My vehicle is a great test subject for it since it still has its original battery pack from 2012 and we know that a few early models had theirs replaced. Also, while the car is almost 5 years old, it doesn’t have a lot of mileage, which means that we can look more into the impact of time vs. people who put hundreds of thousands of highway mileage on per year.

That’s about 6% degradation over 5 years. If you ask me, that’s impressive and a testament to Tesla’s advanced battery charging management and cooling technology.

The only issue I have with my Model S having an original 2012 Tesla battery pack is that supercharging is limited to 90 kW. In 2013, Tesla introduced a new version of the battery pack for Model S that enabled 120 kW DC fast-charging.

I don’t have access to that charge rate. Nonetheless, it’s still higher than most other EVs on the market and I have access to Tesla’s Supercharger Network for free. So I’m not complaining.

As for the vehicle itself, it is exceeding my expectations. It was delivered to me almost pristine and it’s clear that it has a lot to do with the good care of the original owner (thanks Doug!), but Tesla also does some touch ups during the recertification process.

Almost everyone not familiar with Tesla (by that I mean people who don’t know the tells of different year models, like the fascia refresh) thought it was a brand new car when taking a look or getting in for a ride. Most of them were quite surprised when I told them that it was almost 5 years old.

I’m surprised myself. Before buying the vehicle, I was warned by longtime Tesla owners that the early production models can feel more flimsy than their more recent builds as they improved their manufacturing processes, but having recently driven more recent Tesla vehicles, I barely feel a difference when driving in my 2012 Model S P85.

It feels solid on the road and the instant torque with 0 to 60 mph acceleration in just over 4 seconds never fails to put a grin on your face.

I had nothing but smooth rides over the last 2,000 km (1,250 miles). Wind noises are noticeable but minimal and everything still works as intended.

The only issue that arose was the trunk latch, which malfunctioned. Tesla sent a service technician to my house who replaced it in a few minutes. I haven’t had a technical issue since.

My main complaint about my 2012 Model S versus more recent versions of the car is about the seats.

There’s very little wear on them, which is great, but Tesla learned a lot about seats over the last 5 years and they brought more of the design and production in-house.

The result in the latest versions of Tesla’s vehicles is significantly ahead of what you find in my 2012 Model S.

It’s in no way uncomfortable, but it’s not what you would expect from a $100,000 car in 2012 or today. It’s not to say that it ruins my experience with the car because it definitely doesn’t, but after sitting in the premium Tesla seats of a Model S P100D recently, I wish I could just replace them. 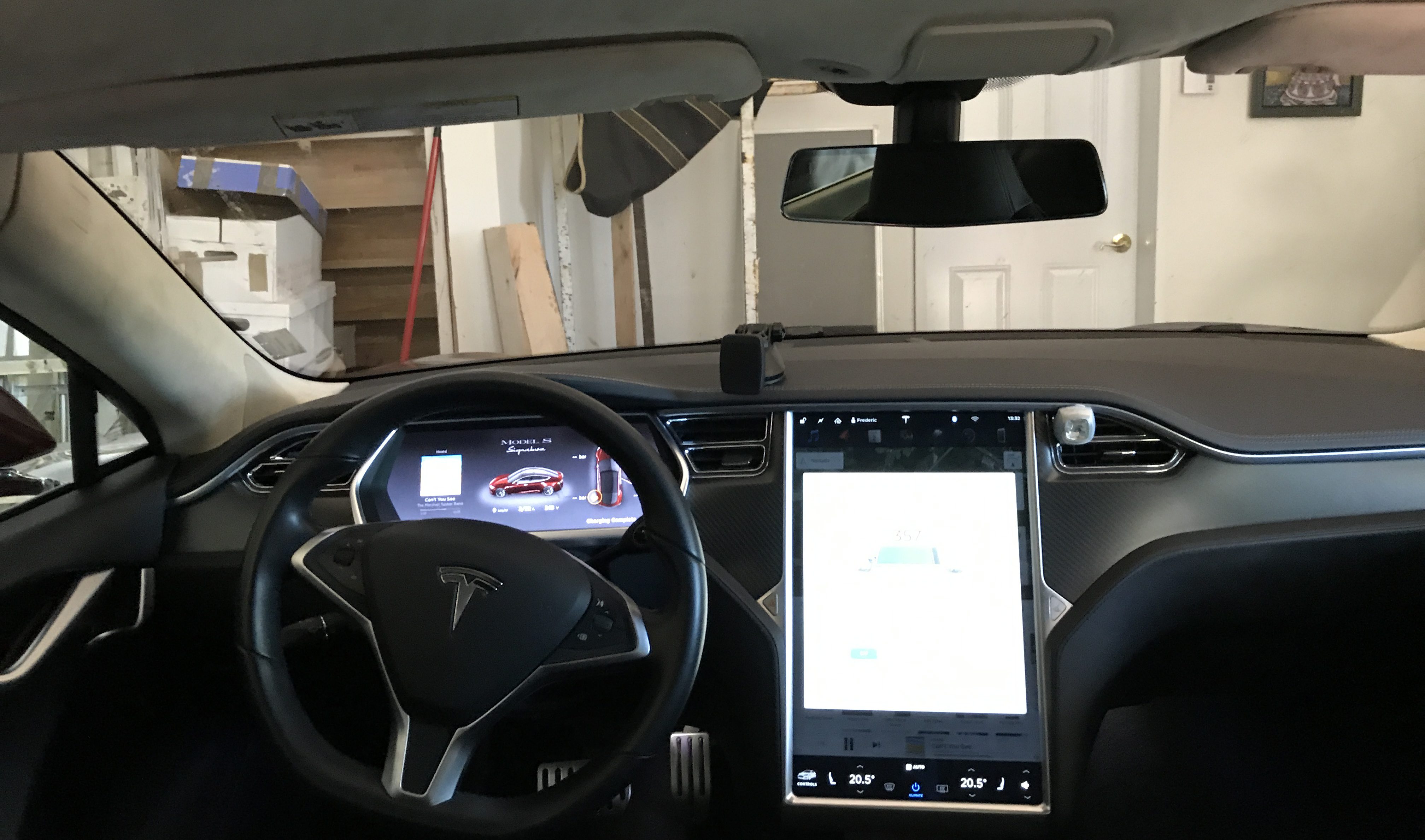 There are way more positive aspects of Tesla’s 2012 Model S interior though. One of the reasons why people feel like it’s a brand new car when they get in is that the interior is aging so well.

When Tesla first introduced the Model S in 2012, automotive media and luxury car buyers complained about the minimalist interior “feeling cheap” and sub par to the usual luxury car experience.

I think that most people would now agree that the minimalistic approach centered around large screens was a brilliant move. It’s likely why Tesla is now doubling down on the approach with Model 3‘s even simpler interior.

5 years later, the vehicle is still receiving software updates to improve the in-car experience. Here’s a look at the different versions of the user interface over the years:

Tesla got of lot of things right here. Climate control is the easiest thing in world and now I can’t live without the remote pre-heating/pre-cooling settings using the mobile app.

Other things, like navigation, albeit with a few glitches, is in my opinion ahead of the competition. It’s especially useful to have navigation both in the instrument cluster and a larger view of your route on the center touchscreen. Planning a longer trip using Superchargers can also come in handy.

Some of those updates have been promised for a while now and hopefully, they can push them out soon.

The car was assembled in December 2012 as one of the first 2,000 Model S sedans ever made.

At that time, Tesla was entirely new to mass production and it has since manufactured over 100,000 units of the flagship all-electric car – getting better at manufacturing throughout that rollout.

Furthermore, the automaker introduced several new features and improvements to the Model S vehicle program, like Autopilot and dual motor powertrains, that those early models don’t benefit from.

Nonetheless, I’d argue that the 2012 Model S holds up beautifully to the test of time.

I bought the vehicle after I determined that I wasn’t likely to get a Model 3 in Canada until the end of 2018 even though I reserved on the first day. I would have liked to have Autopilot and all-wheel-drive, but after spending the last 3 months driving the vehicle, I don’t regret it.

If you are looking to buy a Tesla on a budget that doesn’t allow for a new Model S and you can’t wait for Model 3, I would certainly recommend looking into Tesla’s certified used vehicles. In my opinion, they hold up to the test of time.