Tesla is really going wild with those new “secret level” prizes of its latest round of the referral program for Model S and Model X owners.

After a discount on the unreleased next-gen Roadster, Tesla has now added a second “secret level” that has to do with Tesla CEO Elon Musk’s latest company: The Boring Company.

The prizes of Tesla’s referral programs used to be pretty similar in each of its rounds. A new set of wheels, a Powerwall, an invite to the company’s latest event, but in the latest round, Tesla added “secret levels” unlocked only when all your referrals are delivered.

Only then you can know what the prize actually is and get 5 more referrals to unlock it. The prizes appear to be things that owners will only get further down the road.

The first level is 2% discount on a Founder Series next-gen Roadster, which hasn’t even been unveiled or announced for production yet, for every new referral.

Seth unlocked the level. Here’s the message in full: 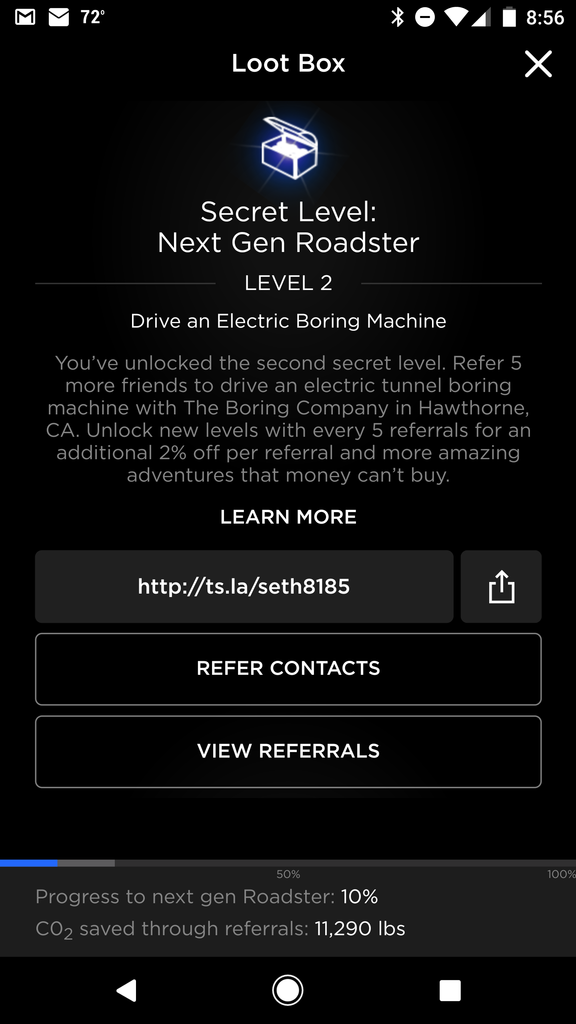 It’s not the first time that Tesla’s prizes had to do with Elon Musk’s other companies. They offered tours of SpaceX’s headquarters as referral prizes before.

We also recently reported that the Boring Company plans to use Tesla’s technology for its tunnel project under LA. They are developing their own tunnel boring technology on their Boring Machine 1 (aka Godot), which is likely with referral winners will drive, but their system of electric skates to transport cars in tunnels will use Tesla’s tech, according to a Boring Company executive.