The timing of Tesla Model 3 deliveries is especially important to reservation holders in the US because it can impact their access to the $7,500 federal tax credit for electric vehicles.

At this point, no one, even Tesla, knows exactly when the phase out period will start, since it starts when they hit 200,000 total deliveries in the US, but the company has the most insights into when that can happen and they are now using it to sell Model S to Model 3 reservation holders.

We have received several reports of Tesla salespeople from different Tesla stores in the US telling Model 3 reservation holders that they might not get access to the $7,500 federal tax credit if they don’t get their Model 3 delivery by the end of the year.

As we previoulsy reported based on Tesla’s new delivery estimator, unless someone based in the US placed a reservation within the first few days when it was made available last year, their delivery estimate can be pushed to next year.

Also, if they want the dual motor or performance version, they will also have to wait until next year.

For example, a Tesla owner advisor wrote in an email to a Model 3 reservation holder in Texas (via thrftshxp):

“The Model 3 is on average pricing around $57,000 pre-tax and unless you get delivery this year it doesn’t look like it will have the $7,500 Federal Tax Credit.”

The email goes on to push the Model 3 reservation holder toward a Model S 75 instead, which is being described as “the same cost” as a Model 3.

Update: Tesla told Electrek that they do not approve of the email.

Unless Tesla expects to hit the 200,000 US delivery mark by the end of the third quarter, which is unlikely, this statement is misleading.

The tax credit program states that the phase-out period starts during the second calendar quarter after the calendar quarter in which the cap was reached – meaning that customers will still receive the full $7,500 tax credit for at least a full quarter. In other words, people will still get the full credit for 3 to 6 months after they hit the mark – depending on if it was hit early or late in a quarter.

It means that even if they were to hit the cap this quarter, buyers would still get access to at least a partial credit for a year.

But our estimate actually places the cap being hit in either late 2017 or early 2018 depending on the Model 3 production ramp. It would mean that Tesla buyers in the US would still have access to the full $7,500 credit for the first 3 to 6 months of 2018.

Furthermore, the price comparison between Model 3 and Model S in the email above is misleading. Though it’s the first time we hear of it so it might not be as widespread as the federal tax credit point.

While it very well might be true that the current average sale price of the Model 3 is $57,000 that is not expected to be the case anymore by November when Tesla starts production of the standard battery pack version.

Currently, buyers have to select the long range battery pack for $9,000 on top of the $35,000 base price and they have to take the $5,000 premium package, which brings the price up to $49,000. The salesperson seems to imply that all buyers are also going for the Autopilot and self-driving features and/or the color and wheels premium.

It brings the price up fast: 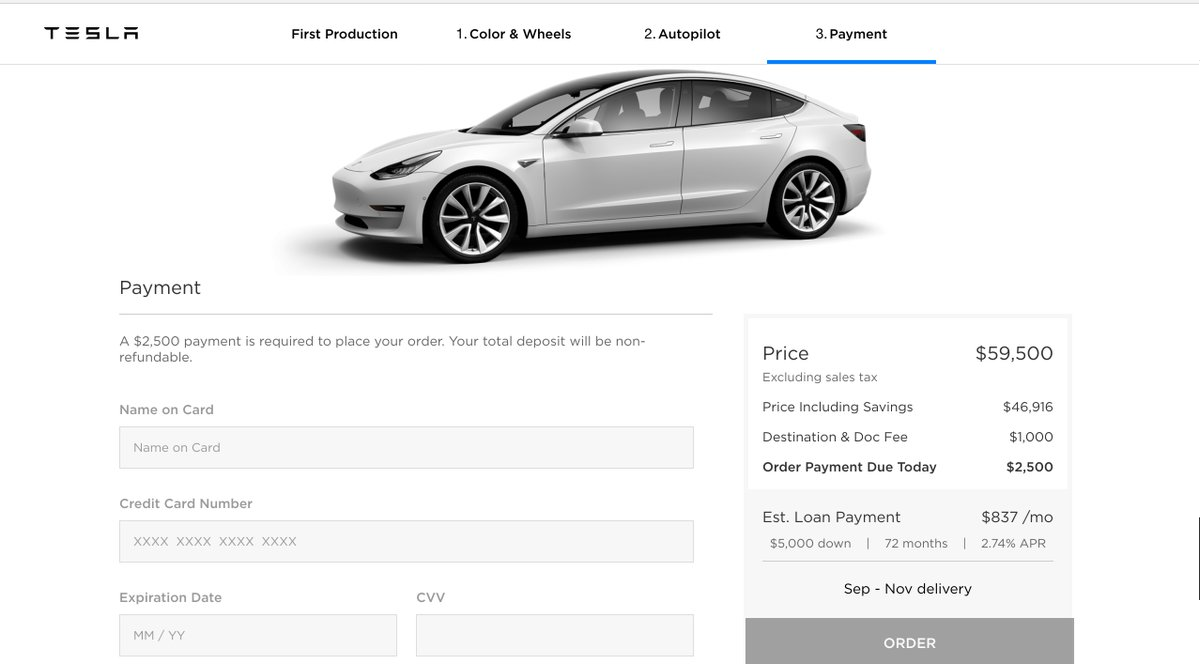 Those requirements are to simplify Tesla’s production process and start with higher margin features while production is still difficult, but the price should come down by November when Tesla starts to offer the standard features.

Tesla CEO Elon Musk said earlier this week that he expects the early sale price to be around $50,000 and that it will come down to about $45,000 once they make all options available.

Even with all those premium options, the Model S is still a little more expensive than the fully equipped Model 3 and it still has fabric seats and no Autopilot features. It becomes almost $20,000 more expensive if you want the same options in the Model S.