We just talked about the inevitable advent of electric trucking, but they are still hurdles to overcome when it comes to charging those machines. A controversial solution is to have overhead contact line on highways and it is now moving from a simple idea to reality on the Autobahn in Germany.

Following initial tests on a 2 km stretch of the highway, they are now moving forward on a more significant project.

Siemens has been commissioned by the German state of Hesse to build the charging system on a ten-kilometer stretch of the A5 federal autobahn between the Zeppelinheim/Cargo City Süd interchange at the Frankfurt Airport and the Darmstadt/Weiterstadt interchange.

The project called “eHighway” is being managed by Siemens, but it is financed by both the state and federal governments.

Gerd Riegelhuth, Head of Transport of Hessen Mobil, commented on the goal of the project:

“Construction of the system will demonstrate the feasibility of integrating overhead contact systems with a public highway. The system will be used for real transport networks, and prove the practicality of climate-neutral freight transport in the urban region of Frankfurt.”

Similar systems have also been deployed in Sweden and California for trials and other regions are considering the highway charging solution.

eHighway is a reliable and environmentally friendly alternative to standard truck transport that supplies trucks with power from an overhead contact line. This means that not only is energy consumption cut by half, but local air pollution is reduced too, making the technology twice as efficient as internal combustion engines.

In California Siemens has teamed up with the automaker Volvo and local truck retrofitters in order to carry out a pilot project with the South Coast Air Quality Management District (SCAQMD). The plan is to set up a zero-emission corridor on Interstate Highway 710, between the two sea ports and the inland railway hubs around 30 kilometers away, where shuttle transport using e-trucks will relieve the burden on this smog-plagued region. Project planning is already underway. The picture shows an driving scene at the extended eHighway test track in Groß Dölln, Germany

Of course, they are several limitations, like cost and speed. The systems need to be installed on fairly long distances in order to supply a significant charge and that can be costly. Also, a connector and deployment system needs to be installed on the trucks using the overhead contact line, but several truck makers have shown interest in the technology.

Another limitation is the speed, but Siemens says that its solution allows the truck to travel at up to 90 km/h (56 mph), which is reasonable. 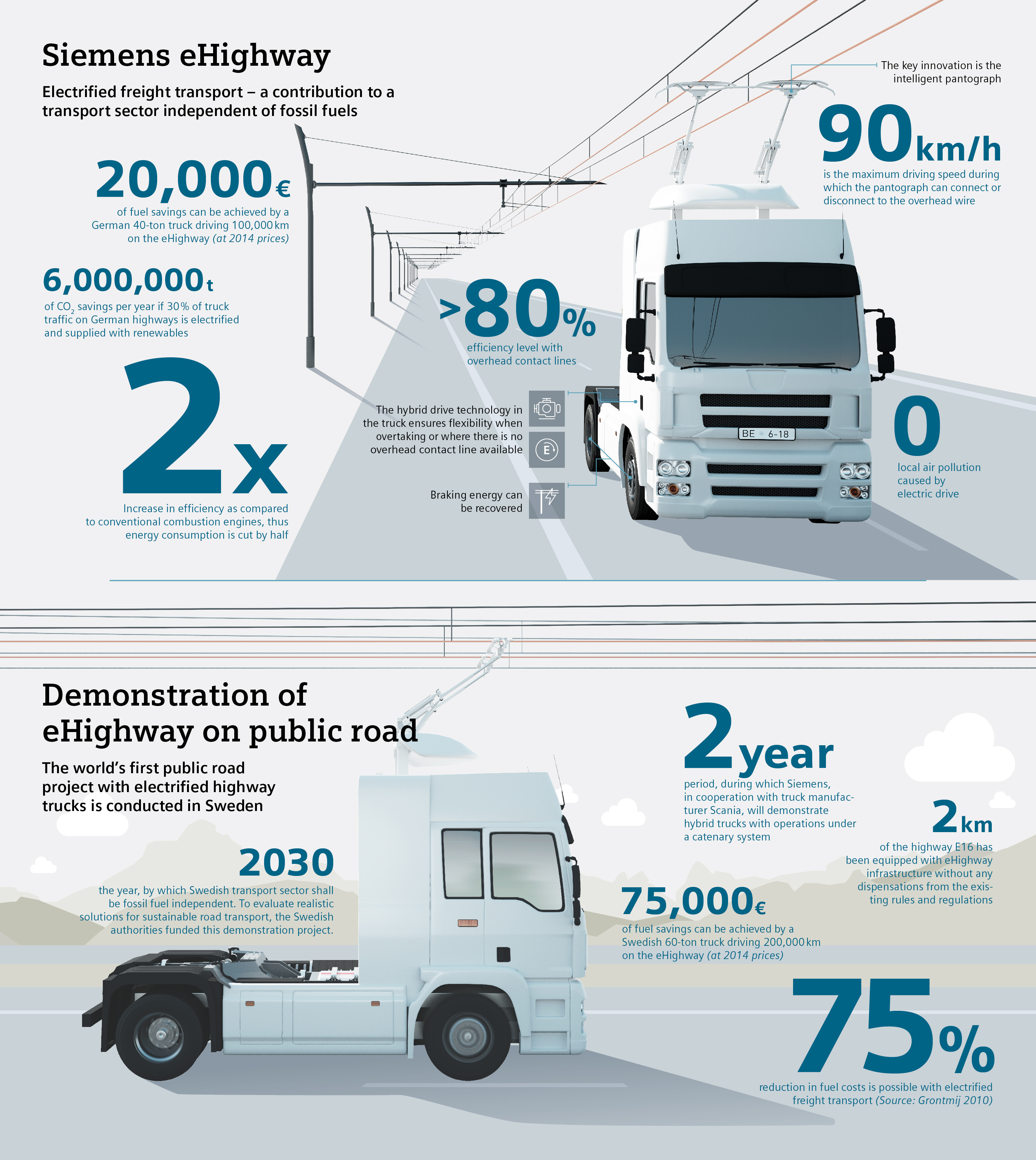