Tesla (TSLA) is set to release its second quarter 2017  financial results on Wednesday, August 2 after market close. As usual, the release of the results will be followed by a conference call and Q&A with Tesla’s management at 2:30pm Pacific Time (5:30pm Eastern Time).

Here we take a look at what both the street and retail investors are expecting for the quarter.

During the last quarter, Tesla’s stock price rose to new highs before a few setbacks over the past few weeks.

The earnings results come just days after Tesla delivered the first few Model 3 units and consequently, the stock price fell yesterday – the first day of trading since the event, which didn’t feature any major announcement.

But it does mean that the second quarter results are going to be last without Model 3 deliveries.

Therefore, investors will be looking to get a good idea of Tesla’s position going into the most important production ramp to date for the company.

The company already disclosed their delivery number for the last quarter: Tesla delivers 22,000 vehicles to reach lower-end of delivery goal. The company had been previously guiding a delivery goal of 47,000 to 50,000 vehicles for the first half of the year.  After delivering 25,051 vehicles during the first quarter, it pushes deliveries to “approximately 47,100” according to the company.

While it represents a quarter-to-quarter decrease, it also is a 53% increase over deliveries during the same period last year and both Model S and Model X deliveries were higher than during Q2 2016

The company generally adjusts those numbers slightly during the earnings results.

That’s a decrease on the results quarter-to-quarter from Tesla’s actual revenue of $2.696 billion during the last quarter, but a significant increase year-over-year from $1.563 billion in revenue in Q2 2016. 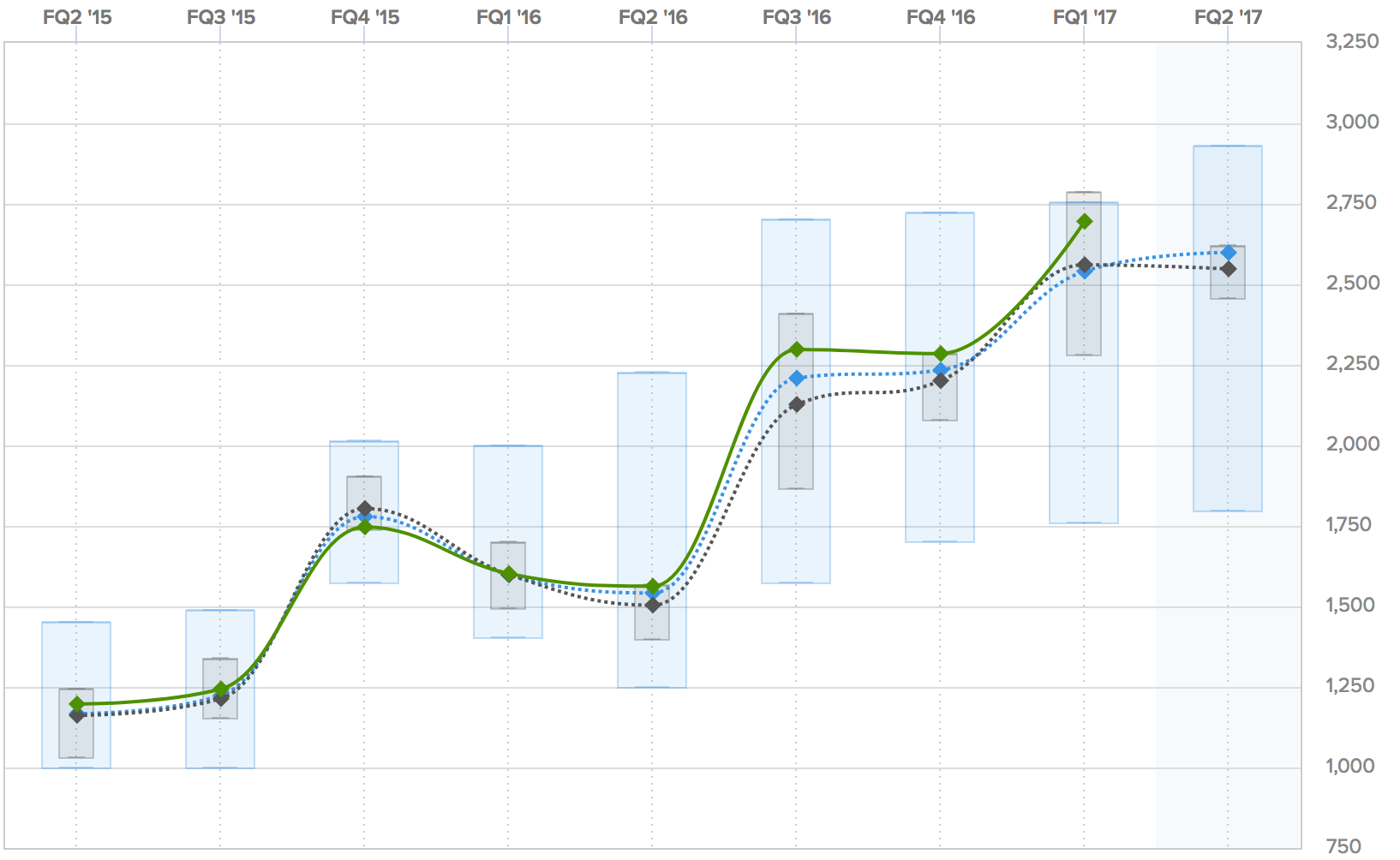 Tesla has been on a good streak – beating revenue expectations every quarter for the past 4 quarters.

Like for revenue, the expectations are again close for both the street and retail investors. The Wall Street consensus is a loss of $1.94 per share for the quarter, while Estimize’s prediction is a loss $1.81 per share. 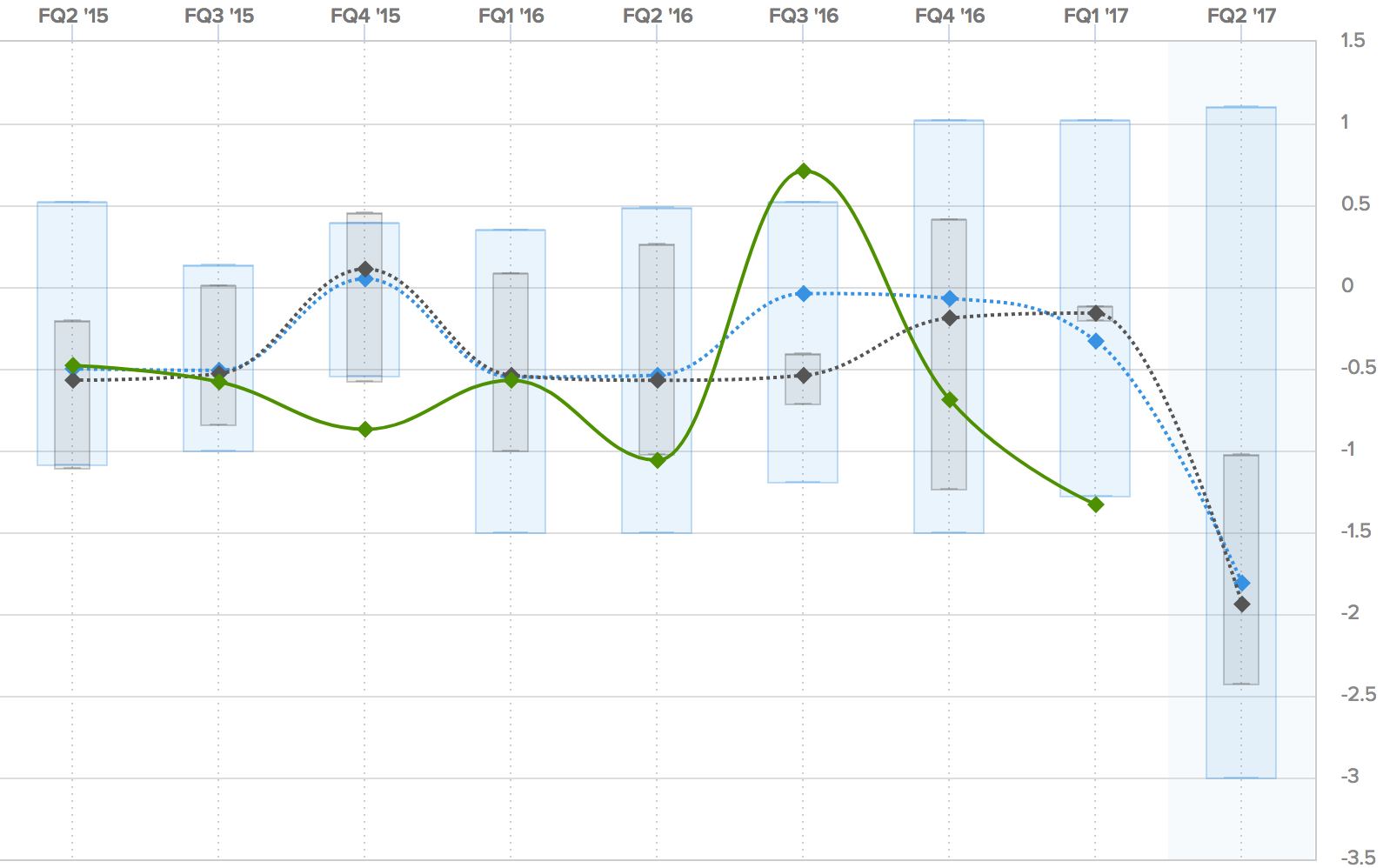 As you can see, earnings have been more of a wild card for Tesla. Last quarter was a big miss despite the record delivery number and this quarter with deliveries being down and Tesla heavily investing in Model 3 production, it could result in an important loss.

After releasing their delivery numbers, Tesla revealed that they aim to deliver about the same number of Model S and Model X vehicles (~50,000) during the second half of the year.

Analysts and investors will likely want to know how Tesla will balance that with the Model 3 hitting the market.

Tesla has also been guiding record capital expenditures in order to finance the production ramp up of the Model 3 and investors will be looking for an update on the status.

Shareholders will also be looking for updates on the launch of Tesla’s solar products this summer and the state of the integration of SolarCity in Tesla as one company. As we previously reported, the solar operations have been under restructuring and we expect to start seeing Tesla put more emphasis on its Tesla Energy division during the summer when they will start installing their exclusive Panasonic solar panels and their own solar roof tiles.