Tesla releases details of its solar roof tiles: cheaper than regular roof with ‘infinity warranty’ and 30 yrs of solar power

Tesla released today all the information to order its new solar roof tiles products – starting with the smooth black glass tiles and the textured glass tiles, as reported earlier today.

Of course, the most important information that people were waiting for is price. CEO Elon Musk first hinted that it would be cheaper than a regular roof after accounting for energy savings, and later said that Tesla’s solar roof could cost less than a regular roof – even before energy production.

Tesla pretty much delivered on both depending on how you look at it.

What is important to understand is that not all tiles on the roof would be solar tiles. It depends on the energy needs of the household and shading coming from structural items such as dormers. For the house pictured above, all the tiles are from Tesla, but only some of them have solar cells in them that can generate electricity – though it’s not visible from street view.

The $21.85 per square foot price point was calculated for a roof where 35 percent of the tiles are solar (solar tiles cost more per square foot than non-solar tiles). During a conference call with journalists today, Musk said that in some cases, depending on the roofs, customers will be able to have up to 70% solar tiles, but in most cases, it will be about 40%.

They released a calculator directly on their website, which any homeowner in the US can use to get an estimate based on data from Google’s Sunroof project. Here’s an example for a home in Maryland with both 70% solar coverage and 40% solar coverage:

Ultimately, Tesla sees that most customers will essentially be paid to have a new roof, when accounting for energy generation and the solar incentive.

They are including an installed 14kWh Powerwall 2 in the quotes. It can be removed, but Tesla believes that most people will want to have the home battery pack for backup energy in case of an outage.

Tesla broke down the cost of both its solar tiles and non-solar tiles against traditional roof solutions. 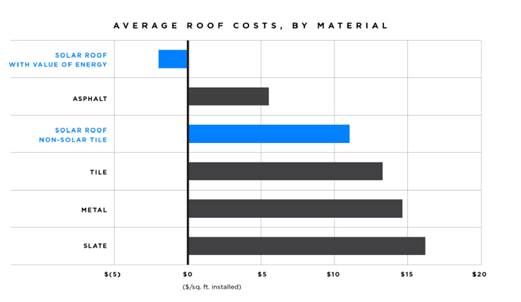 The value of Tesla’s solar roof is closely linked to its durability and its ability to generate electricity over decades.

Musk previously discussed the possibility of making the warranty last for the lifetime of the house on which it is installed and they actually did it:

“Made with tempered glass, Solar Roof tiles are more than three times stronger than standard roofing tiles. That’s why we offer the best warranty in the industry – the lifetime of your house, or infinity, whichever comes first.”

That’s for the tiles themselves. The solar power generation is guaranteed for 30 years, which is on the higher end in the solar panel industry:

During a conference call with journalists, Musk and Peter Rive reiterated their confidence in the new product’s durability, which ultimately, of course, is reflected in the warranty.

They put these through every test imaginable, including shooting a large ball of hail:

The first two tiles, smooth and textured, are going into production this summer. They decided to go with those tiles first because they received the highest number of inquiries.

A $1,000 USD deposit is required when ordering a system online now. Homeowners outside of the US can also order, but they should not expect installation until next year. Musk said that he expects strong demand and for the company to be production constrained on the tiles.

Tesla says that it will manage the entire “Solar Roof experience—from the removal of your existing roof through design, permitting, installation, operations and maintenance of the new Solar Roof.” The company estimates that the installation should take roughly the same time to install as a tile roof installation, which is typically 5-7 days.

They recently updated their mobile app in order to prepare for the integration of the solar products and the Powerwall.

Musk concluded the press call by saying: “When you think of a sustainable energy future, you want roofs to be beautiful and generate energy from the sun. That energy can then charge Powerwalls and electric vehicles. That’s the future we want.”

Tesla solar roof products are perfect for homeowners who want solar and need a new roof relatively soon, but a regular solar panel installation is still a good solution for people who don’t need a new roof. Solar and energy storage prices are highly dependent on your market (electricity cost, gov incentives, etc.) and your property. We suggest to get quotes from more than one installer to make sure you get the best energy solution for your place. UnderstandSolar is a great free service to link you to top-rated solar installers in your region for personalized solar estimates for free.