There are a lot of companies now working on autonomous driving technologies and as many approaches to achieve the ultimate goal of a safe fully self-driving system. With such a transformative technology, there will be an extraordinarily important first-mover advantage.

Navigant Research attempted to create a leaderboard based on each company’s vision and execution in order to get an idea of which ones might have a lead. It published the report this week with interesting results.

They based the rankings on 10 criteria:

Tesla has been considered a leader because of its aggressive timeline to reach level 5 autonomy years ahead of the competition and the fact that it has the most advanced sensor suite available in a vehicle today. Consequently, it is also accumulating the most data since its fleet of sensor-equipped vehicles are in the hands of customers.

But it wasn’t even enough to make the top 10 list: 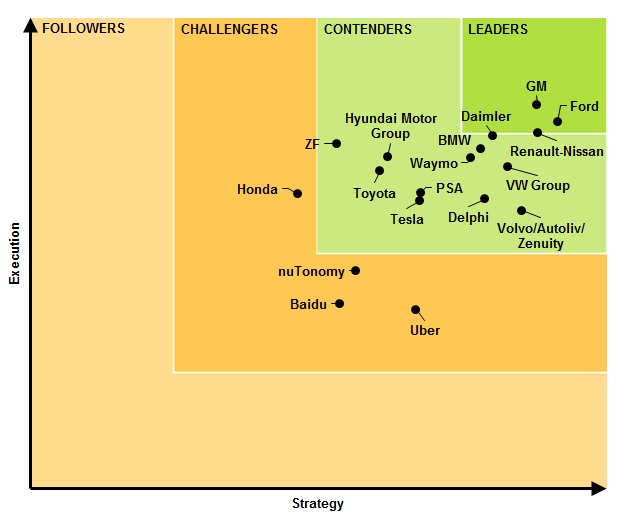 Instead, Ford and GM respectively took the first and second positions despite having timelines to full autonomy in 2020 and 2021 versus Tesla planning a level 5 coast-to-coast demo ride by the end of the year.

Ford CTO Raj Nair was pretty happy to take the top spot and made a blog post about it titled ‘What it Takes to be a Self-Driving Leader‘. If you are hoping for a roadmap on how to make self-driving work, you should pass on the read. He simply shares some broad points about integrating software and hardware, as well as bring a system to market with shared mobility – things that almost every company working on autonomous driving have also been working on.

Nonetheless, Ford has been making progress. Last year, it unveiled its next-gen self-driving car and added 20 vehicles to its test fleet.

As for GM, the bulk of its self-driving effort is built around its $1 billion acquisition of a startup called Cruise Automation, which Tesla referred to as ‘little more than demoware’. The startup recently released an impressive real-world self-driving demo of its Bolt EV prototype.

What do you think of the ranking? Is it a fair assessment? Let us know in the comment section below.