All-electric hypercar maker Rimac is at the Geneva Motor Show today to unveil the latest version of its Concept_One and to announce new distribution deals in Europe, Middle-East and the USA.

The 2018 model year Concept_One features an upgraded powertrain that makes the already insane performance of the all-electric vehicle even more impressive.

The main upgrade is a new battery pack with a capacity of 90 kWh versus 82 kWh for the previous version.

In addition to other powertrain improvements, the company’s Torque Vectoring System can really make use of the extra power to significantly increases performance:

“Numerous developments in the powertrain, battery system and electronics enabled Rimac Automobili to boost its flagship’s performance. The power increased by 100 kW to a total of 900 kW / 1224 hp which enables the Concept_One to reach 100 km/h in 2,5 seconds and 60 miles per hour in 2,4 seconds. 200 km/h are reached in 6 seconds while the 300 km/h mark falls after just 14 seconds. While the performance is staggering, Rimac Automobili’s Torque Vectoring System is being constantly developed and upgraded to keep the power under control, accessible and fun. By controlling each motor (and thus wheel) very precisely 100 times per second, the Rimac All Wheel Torque Vectoring brings unparalleled driving dynamics and usability.”

Here’s a simple side-by-side comparison of the previous specs versus the new 2017 specs (model year 2018): 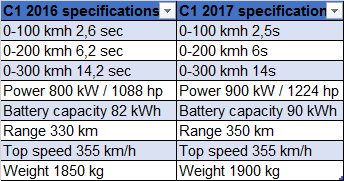 The Concept_One is definitely Rimac’s flagship and while it started delivering a few cars to customers, the company mainly uses the vehicle to showcase the technologies that it develops in order to get supply and development contracts with other automakers, like it recently did for the battery pack of Aston Martin’s upcoming new hypercar.

Nonetheless, they are not just adding to their existing prototype. They built a brand new one with the latest specs for a customer and brought it to the trade show. It’s the black one:

As we recently reported, the company only plans to deliver 8 units of the million-dollar hypercar this year. The vehicles will be sold through Rimac’s new network of authorized dealers.

The company announced 3 new agreements today. New York-based Manhattan Motorcars will sell the Concept_One in the US, PACE Germany will import the vehicle in Europe, and the Alzarooni Group will cover the United Arab Emirates.