When unveiling its second generation home energy storage system, Powerwall 2, last October, Tesla announced that production would start at the Gigafactory in December 2016 for the first deliveries in the US in January 2017. Other markets were set to follow soon after. Tesla later updated its delivery estimate to February in the US.

We can now report that Powerwall 2 production is about to ramp up after early battery production at the Gigafactory was dedicated to Powerpack projects.

It allows Tesla to have the exact same battery cell and battery module manufacturing processes for both products up to the actual battery pack – that’s where the batteries become a Powerwall or Powerpack.

It offers a lot of advantages in term of production efficiency, but it also means that both products share the supply of battery cells and modules, and if there’s a supply constraint, one of the two products will suffer for it.

Here are the pod design and the pods inside Powerpack and Powerwall: 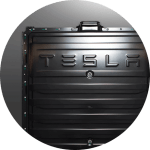 Considering Tesla and Panasonic’s new 2170 li-ion battery cell produced at the Gigafactory is what enabled the second generation of Tesla’s new stationary battery packs, Powerwall 2 and Powerpack 2, the products are highly dependent on its production, which only started in volume last month.

Sources familiar with Tesla’s energy storage business told Electrek that the pipeline of Powerpack 2 projects took up the early battery production. Last year, Tesla Energy consultants gave the opportunity to clients to get their projects deployed sooner with the Powerpack 1 or wait for the end of the year to get Powerpack 2.

Several of them opted for the latter and additionally, Tesla had short deadlines on very large projects, like the one on the island of Kauai and the one with Southern California Edison.

The early production of Tesla’s new 2170 battery cells and the production of battery modules and pods at the Gigafactory were dedicated to the Powerpacks for those projects, but we are told that the bottleneck is behind them and that Powerwall 2 production is starting for deliveries in the next few weeks.

It will still take some time for Tesla to work through its backlog. When Tesla released the first Powerwall in 2015, it received over 38,000 reservations within days, but at that time, what Tesla was calling a “reservation” was merely potential customers signing up to get updates on availability.

For Powerwall 2, Tesla has been taking actual orders with a $500 deposit for the $5,500 device (before installation). Without sharing actual numbers, a source familiar with the matter told Electrek that the new backlog is “similar in size” to the first generation backlog despite the new reservation process demanding a bigger commitment.

In term of battery pack units, it will eclipse Powerpack deployment, but not in term of total energy capacity since a relatively small 22-Powerpack project, like the one we reported on yesterday with PG&E in California, is the equivalent of over 150 Powerwalls.

While things have been ramping up nicely for Tesla Energy’s commercial and utility business, it looks like things are about to get just as interesting in its residential business in the coming weeks.

If you hold a reservation for the Powerwall 2 and you get more details about deliveries in the coming days or weeks, feel free to let me know via Twitter or email (contact info on profile page)