If you don’t know what ‘Adam Ruins Everything’ is exactly, it’s an internet TV show aimed at millennials and hosted by CollegeHumor’s Adam Conover. It tries to debunk allegedly false perceptions that are normally considered common knowledge. Some of the most popular episodes are “Why Engagement Rings Are a Scam” and “The Real Reason Car Dealerships Are the Worst” (which we can endorse).

In a new episode today called “Electric Cars Aren’t As Green As You Think”, Adam exposed his audience of over 11 million people to some classic electric vehicle misinformation, and in the process demonstrated that the EV industry still faces difficult perception problems reinforced exactly by this kind of simplistic thinking.

The episode uses Tesla as an example, but it seems to be targeted at electric vehicles in general. In the episode (embedded below), Adam attempts to convince someone not to buy a Tesla because “electric cars aren’t as green as you think,” which is a talking point that has been pushed by the fossil fuel industry for years and leaves us suspicious of Adam’s motivations.

Adam’s main arguments are very simplistic and can be broken down and debunked easily. For example, he asserts that buying a new car has a significant footprint. This is, of course, true, but it also only really makes a difference if you assume that everyone buying new electric cars is doing so just because they want one. The act of buying an ICE car has the same, if not worse, footprint.

The vast majority of people buying electric cars today are buying it primarily for the same reason that they would buy a gas-powered car: they need a car. They choose electric for many different reasons, but the argument that “consumerism is contributing to gas emission; therefore, you shouldn’t buy an electric car” makes no sense, as it can apply to literally any product.

The goal is to have greener choice in products that we need, and electric cars provide that. Or do they? It brings us to Adam’s second main argument: “you are just shifting emissions from the tailpipe to the power plant.”

That’s a complex issue, but Adam conveys it poorly in the segment. Most people watching this will come out of it thinking that EVs are polluting more than gas-powered cars because power plants are polluting, which is just plain wrong.

Of course, it varies greatly depending on your location, but several recent studies show that based on local electricity production, electric vehicles are the best option in the vast majority of the US, which is not even a leader in percentage of renewable energy in total generation. Almost every region is at least better than gas-powered cars.

A UCS study based its modeling on the Nissan LEAF and Tesla Model S, two cars at opposite ends of the all-electric spectrum, in order to update its breakdown by region to account for local energy generation. You can see the map for MPG equivalent after accounting for electricity production per state below: 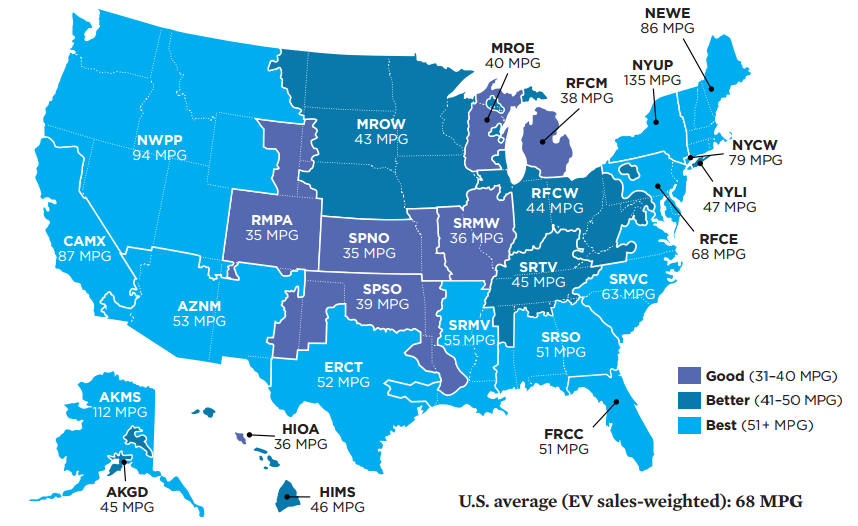 That’s not even accounting for the fact that electric vehicle owners are much more likely to own solar installations. A study in 2014 found that among utility customers in the western U.S., 32 percent of EV owners had installed rooftop solar.

At this point, it’s difficult to understand how anyone would think that an electric car is not a “greener” option, especially when you account for all the supply chain of the petroleum industry, which also consumes large amounts of energy through oil refineries. You can’t compare that with a battery pack and the metals used in them since those metals are entirely recyclable, which is not the case for gas. Once it’s burned, that’s it.

Here’s the episode. Make sure you link people to this debunking wherever you see this video: