Considering most specs about Tesla’s batteries are kept secret, it can sometimes be difficult to understand the company’s competitive advantage in this space. Experience and data are certainly important factors. Tesla was the first company to treat battery cells as a commodity and build large battery packs using thousands of common cylindrical li-ion battery cells. That was over a decade ago.

To this day, most automakers are still building battery packs using a few hundred pouch cells in their electric vehicles.

Additionally, Tesla leads all other electric automakers in term of deployed battery capacity on the road. While it doesn’t have the biggest electric vehicle fleet, its vehicles have much bigger battery capacity on average and, of course, a lot more cells. That represents valuable data for the company to improve on future battery pack designs.

But ultimately it comes down to cost and Tesla is without a doubt the leader as demonstrated by its new and recently revealed Tesla Energy products.

It’s more difficult to figure out the cost of Tesla’s vehicle battery packs since they are obviously not sold separately from the vehicles. The closest we’ve got was a cost “less than $190 per kWh” as disclosed by a Tesla executive earlier this year.

But Tesla’s stationary storage battery packs are very similar to Tesla’s vehicle solutions and they are priced separately, which can give a good idea of Tesla’s lead when compared to other options.

We already did a price comparison of the Powerwall 2 with a few competitors, including LG Chem which supplies most other electric automakers, and Tesla came out on top by a significant margin.

Now Renew Economy did a similar comparison, but with the cost of total kWh warranted and with several more similar options available. Here’s the chart (note that the price is in AUD): 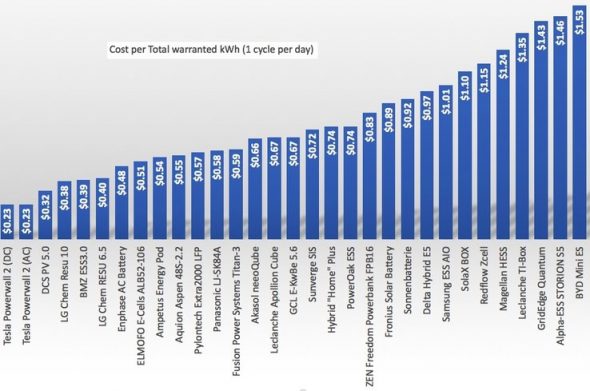 Tesla has a cost per warranted kWh delivered about 30% lower than the closest competitor and several times lower than most competitors, including important battery manufacturer like LG, Samsung, and even Tesla’s own battery cell supplier, Panasonic.

The battery cells in Tesla’s Powerwall will reportedly be made by Panasonic at Tesla’s Gigafactory, but they were developed by Tesla in partnership with Panasonic. The combination of using those new battery cells with Tesla’s latest generation battery pack technology resulted in this new record low battery pack price.

It also acts as the basis of Tesla achieving the Model 3’s starting price of $35,000.

If Tesla’s latest battery technology has a similar impact on its “less than $190 per kwh” cost for vehicle battery packs as it had from Powerwall 1 to Powerwall 2, it will bring the cost down to roughly $120 per kWh for the battery pack or less than what GM is paying just for the battery cells in the Bolt EV ($145/kWh).

Tesla is likely to maintain a similar battery cost lead for its vehicle battery packs as it does for its home battery pack illustrated by the Renew Economy’s chart above.

Tesla CEO Elon Musk recently referred to the company’s new 2170 as the ‘highest energy density cell in the world…that is also the cheapest’.