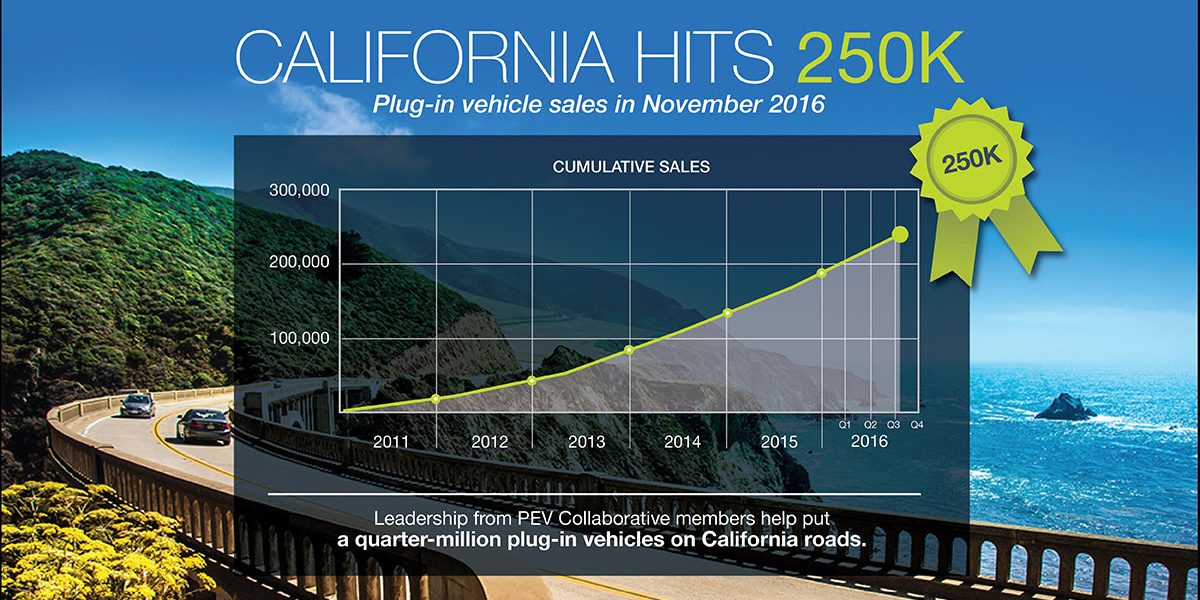 The state of California reached the milestone of a quarter million plug-in electric vehicles on the road since the resurgence of EVs in 2010. With 30 different electric vehicles available in California due to its ZEV mandate, the state is able to grow its EV fleet significantly faster than the rest of the US.

The milestone was announced by the California Plug-In Electric Vehicle Collaborative. Executive Director Christine Kehoe commented on the announcement:

“Just a few years ago, you could count the number of plug-in models on one hand. Times have changed. Today, anyone thinking about buying a car can check out more than 30 electric models. And with federal and state rebates, they are more affordable than ever.”

The state is aiming to reach 1 million electric plug-ins by 2025, but it will hopefully reach the goal sooner with several new electric vehicles hitting the market in the next few years.

The Chevy Bolt EV and Tesla Model 3 alone could make a significant contribution to the tally next year.

“Californians can take pride in driving the nation toward a zero-emission future. A widespread shift to zero-emission vehicles is technologically feasible and economically sensible. It will clean our air and protect our climate.”

Beyond the new models coming to market, a strengthening of the ZEV mandate by the Air Resources Board could also accelerate the EV adoption in the state. The regulators are reportedly considering the stricter zero-emission vehicle rules as automakers have been stockpiling ZEV credits.