In other words, the automaker expects that it will take between 6 to 12 months to work through its backlog, which isn’t news for most people following Tesla.

But CNBC reported this as news that Tesla “pushed back” delivery of “new Model 3 orders”, which sent Tesla’s stock down by 2% in seconds.

We reached out to Tesla and a company representative confirmed that the change on the Model 3 page on its website doesn’t reflect any change for the Model 3 production or delivery plans, but only to reflect more accurate timing for people reserving the Model 3 today.

On the chart of Tesla’s stock below, you can clearly see when CBNC released the article at 1:21pm and the stock price crashed while the volume of stock traded spiked: 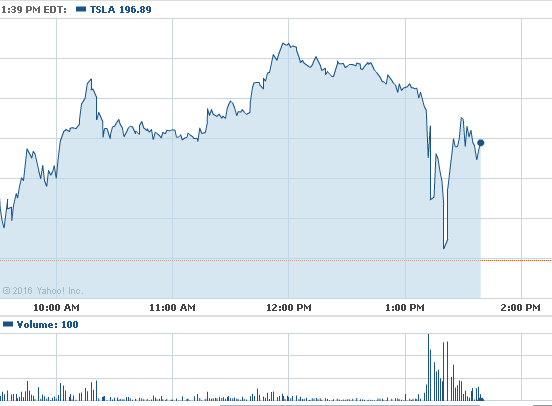 CNBC has since updated its headline from “Tesla quietly pushes back delivery estimate for new Model 3 orders to mid-2018 or later” to “If you didn’t order your Model 3 yet, you won’t get it until mid-2018, Tesla says”.

In the updated article, the publication makes no mention of the drastic change in the lead of the article, but only that the date applies to new reservations – something that was already clear from Tesla’s Model 3 page (old version on the left and new one on the right):

Tesla sent us the following statement:

“Today’s website update does not reflect any change in our plans. We still plan to begin Model 3 deliveries in 2017, and we adjusted the delivery date on our marketing page to reflect more accurate timing for new/future reservation holders.”