It will come at no surprise to you that Tesla vehicles are not in everyone’s price range. Even though the Model S is definitely priced in the high-end with a starting price of $66,000, it has been known to attract customers willing to stretch their budget in order to buy one and be a part of the rEVolution.

But now we learn of other Tesla owners finding innovative ways to afford their Model S. Some owners are using car-sharing platforms in order to finance the expensive purchase.

Services like Turo and Getaround enable car owners to lent their vehicles to the users of the applications in order to earn some money. They are basically building a car renting company with a crowdsourced fleet.

The companies talk to Quartz today and released some data showing that some of their users are Model S owners and they are actually able to cover their monthly Tesla payment through their monthly rental revenue.

Here’s some data from Turo: 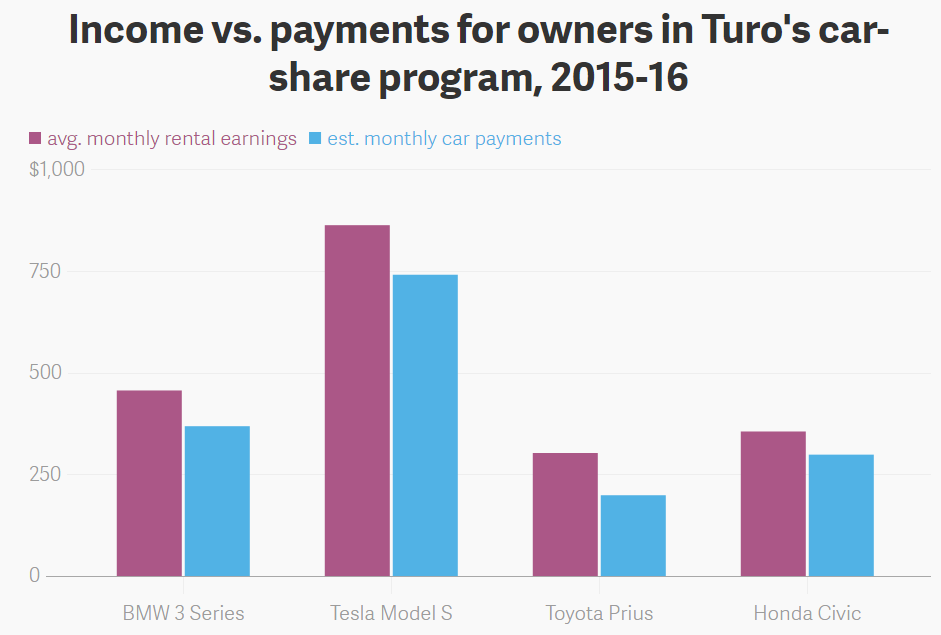 The monthly payment is certainly on the low-end for the Model S, but the average monthly rental earnings certainly leave some wiggle room and that’s for an average equivalent of renting their cars out for about a week per month (~6.5 days).

Now I’m a bit skeptical because I’ve talked to owners who tried the scheme and ended up renting their Model S out only a few days out of the month despite some flexible availabilities.

But I would assume that the success rate would be highly depended on where you are located and if the services, again like Turo and Getaround, are popular in your region.

For example, Quartz talked to Ryan Cwynar who is renting out his Model S on Turo in Los Angeles, a densely populated city. He says that he bought a used $62,000 Tesla Model S with a no-down-payment bank loan and that he has been making enough to cover all expenses related to the car:

“I have been driving a Tesla around for about half a year and to date I have paid nothing out of pocket for it,”

It’s not clear how it can affect the warranty and insurance coverage, but the Model S has been a popular vehicle with taxis since Tesla’s 8-year and unlimited miles warranty for the powertrain is valid for commercial use.

What do you think? Would you consider renting out your Tesla through those third-party apps? Or you are waiting for Tesla’s own application for when its cars will be self-driving?