Tesla/SolarCity: First look at new Silevo solar panel that Musk has been boasting about for its aesthetic features

Since announcing Tesla’s intentions to acquire SolarCity, CEO Elon Musk has often been talking about the importance of aesthetics in rooftop solar installations. In the original conference call discussing the merger proposal, he came back to the aesthetic of the panels a few times. He said that the new panels will enhance the aesthetic of the roof on which it is installed and therefore add to the value of a house instead of decreasing its value – again based on aesthetics.

He said that he is confident SolarCity’s new panels, built by its Silevo division, will achieve that, but he couldn’t talk about it in details since SolarCity has yet to unveil the solar panel. Now today we finally got our first glimpse at the new solar panel.

This morning, Tesla and SolarCity announced that their boards of directors approved an agreement, subject to SEC review, to bring to a shareholders vote after a ‘go-shop’ period of 45 days. In the PowerPoint presentation for the agreement, the companies included a picture of a solar panel with the mention “solar roofing”.

We contacted SolarCity to ask if this is SolarCity’s new PV panel and a spokesperson confirmed to us that it is indeed a picture the new Silevo panel the company plans to manufacture at its 1 GW factory under construction in Buffalo.

Albeit not a high-resolution picture, it’s the first time we get to see the new panel, which has been boasted about its aesthetic features. Now that the cat is out of the bag (or halfway out), we asked for a better picture and we will update if it’s possible.

At first glance, it looks like the panel’s solar cells are a lot smaller and closer together than what we are used to. It gives the module a more uniform look, which could arguably look better on a roof than modules with well-defined solar cells. 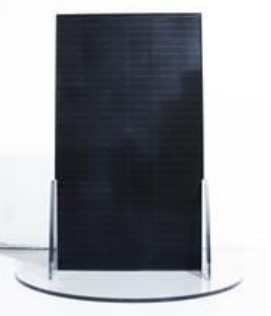 Elon on the panel:

“There’s the Silevo acquisition, which I think it the best technology out there for high-efficiency, low-cost solar panels. And at the same time, very significantly improving the aesthetics of the solar panels. I think there’s quite a radical difference between having solar panels on your roof that actually make your house look better versus ones that do not, I think it’s going to be a night-and-day difference.”

In 2014, SolarCity acquired Silevo in a $200 million transaction (with an additional $150 million in performance based earn-outs) for its high-efficiency Triex technology.

The company has since announced that the panel it will manufacture achieved 22% efficiency and it will produce between 350 to 360-watt compared to the 260-watt panels SolarCity currently installed.

SolarCity is already producing the panel at its 100 MW pilot facility in Fremont, California, for testings, but they plan on transferring the production to the 1 GW Gigafactory in Buffalo next year.

While we have been calling the panel a ‘Silevo panel’ or ‘SolarCity panel’, if the merger goes through, it’s likely that it will become a ‘Tesla Solar panel’ since the company applied for trademarks to sell its own modules. CFO Jason Wheeler also said today that the company aims to bring the business under “one brand”.