Tesla is about to open its 2 biggest Supercharger stations yet, 20 stalls each

One of the biggest concerns for some Tesla Model 3 reservations holders, especially if they have been following the automaker for a while, is how Tesla will be able to scale its Supercharger network with the anticipated massive increase in the number of vehicles in its fleet over the next few years.

Some stations located on popular routes are already pretty busy and it’s not always rare to have to wait in lines. But it’s encouraging to see that Tesla is about to open its two biggest Supercharger stations yet…

The first of the new stations is in Fremont, California, not far from Tesla’s factory, where the company already operates a 12-stall Supercharger. It has been under construction since late last year on Kato Road next to a 300,000 sq-ft building Tesla acquired as part of its expansion in the area.

It’s not clear when it will come online, but a reader visited the site recently and reported that the installation appears to be almost complete – though it can sometimes take a while to coordinate permitting with the electric utility. 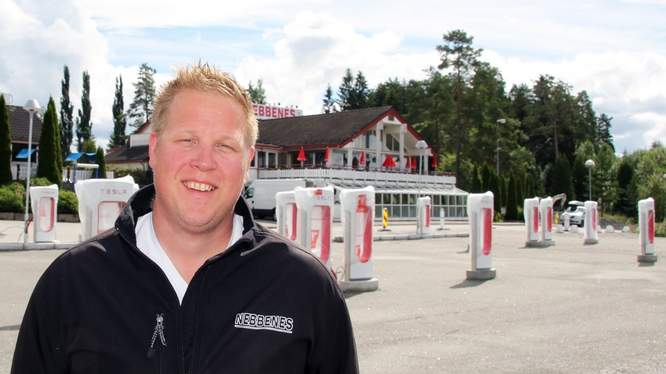 The other 20-stall Supercharger is located in Nebbenes, Norway – just north of Oslo. Tesla could actually bring this location online before the new Fremont Supercharger despite having started construction only 2 months ago (versus 10 months ago for Fremont #2).

The manager of the service area where the Supercharger is located, Morten Østnor (pictured above), told a local newspaper that they are planning for the facility to come online by the end of August, which could make it the site of the world’s largest fast-charging station for electric vehicles.

As you can see in the picture above, it also features a new layout which looks less like a parking lot and more like a drive-through.

Earlier this month, we reported on Tesla increasing the capacity of the Supercharger to 145 kW, which is also useful for handling more stalls while maintaining a higher charge rate.