Tesla recently made a key hire in digital retail and user experience. Electrek has learned that the automaker hired Chester Chipperfield, former Burberry Vice President of Digital and Interactive Design, earlier this month. Chipperfield, who more recently worked at Apple, confirmed the move on his LinkedIn profile.

He is taking over the role of ‘Global Creative Director’ at Tesla after leaving ‘Special Projects’, which is where Apple’s Titan car project (and other ventures) lives, at the Cupertino company earlier this month.

Chipperfield has extensive experience in digital retail, which he led at Burberry where he worked from 2011 to 2014 before joining Apple in ‘Special Projects’ in January 2015. We reported on his move to Apple on 9to5mac last year – which followed the move from Burberry CEO to Apple Retail of Exec Angela Ahrendts . At the time, 9to5mac speculated that he would be “critical” in the retail rollout of the Apple Watch.

He will be joining several other former fashion industry employees at Tesla, including from his own former employer, Burberry.

While it looks like Tesla’s retail effort is already been fairly influenced by the fashion world – and not only through its workforce but through actually selling directly in fashion stores with its recent pilot project with Nordstrom and in upscale fashion malls – now Tesla’s digital retail effort will also be influenced by a former Burberry exec. 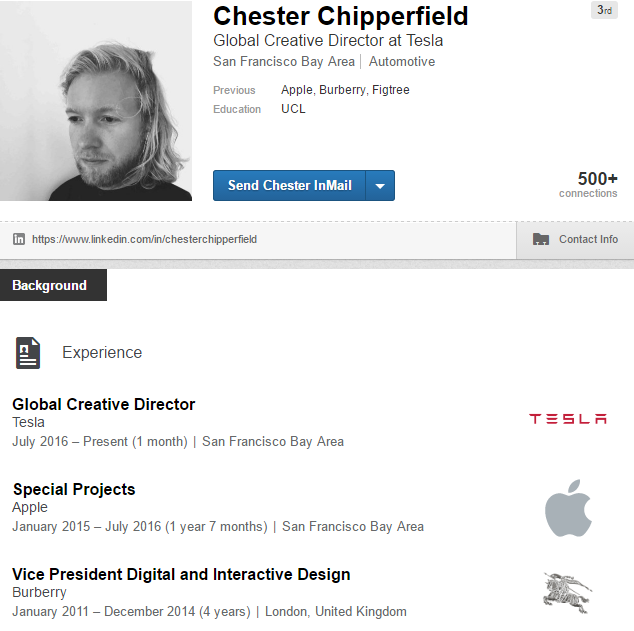 To be fair, even aside from Apple, Chipperfield’s experience goes beyond fashion. He also contributed to the online retail strategies of HTC, Orange and Blackberry through his freelance work, according to his LinkedIn profile.

The upcoming Tesla Model 3 and the potential merger with SolarCity could bring some significant changes to the company’s retail experience, both in store and online. The less expensive vehicle and a new line of products will expose Tesla to new markets and customer base, which could offer different retail challenges.