In a development regarding the fatal accident in Florida where a Tesla Model S on Autopilot crashed into the trailer of a truck last month, the truck driver in question, Frank Baressi, now claims that the Tesla driver was watching a movie while traveling on the highway using the Autopilot.

The accident happened last month in Florida, but it came to light only yesterday when it was announced that the U.S. National Highway Traffic Safety Administration (NHTSA) launched a preliminary evaluation into Tesla to make sure the Autopilot worked according to expectations.

When the local journal described the accident in the ‘police beat’, it said that ‘charges were pending’ – presumably against the truck driver:

“When the truck made a left turn onto NE 140th Court in front of the car, the car’s roof struck the underside of the trailer as it passed under the trailer. The car continued to travel east on U.S. 27A until it left the roadway on the south shoulder and struck a fence. The car smashed through two fences and struck a power pole. The car rotated counter-clockwise while sliding to its final resting place about 100 feet south of the highway. Brown died at the scene. Charges are pending.”

Here’s the intersection where the accident happened: 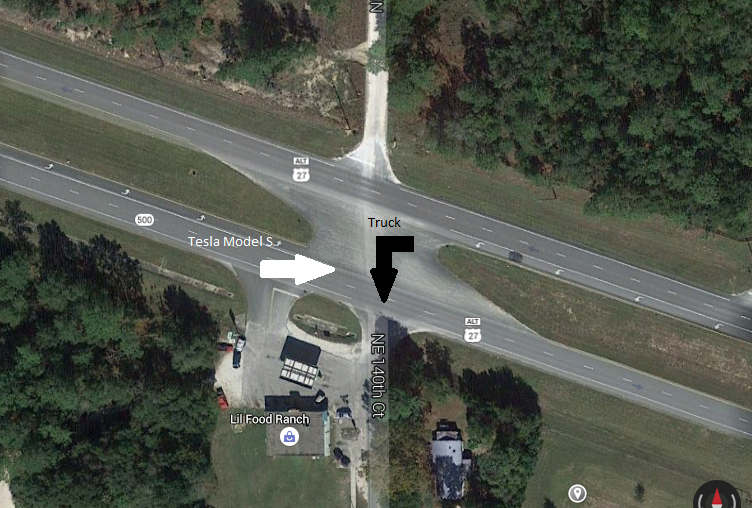 Now Baressi talked to Associated Press and claimed the Tesla driver was not paying attention because he was watching a movie:

Frank Baressi, 62, the driver of the truck and owner of Okemah Express LLC, said the Tesla driver was “playing Harry Potter on the TV screen” at the time of the crash and driving so quickly that “he went so fast through my trailer I didn’t see him.”

“It was still playing when he died and snapped a telephone pole a quarter mile down the road,” Baressi told The Associated Press in an interview from his home in Palm Harbor, Florida. He acknowledged he couldn’t see the movie, only heard it.

The police report made no mention of a movie playing. While the Model S is equipped with a 17-in screen, the video playback capacity is locked to only work for the rear camera feed and cannot play any media.

Earlier this year, we reported on a hacker managing to bypass the safety measures in place and playing Terminator on her Model S, but it required a fairly complex hack and routed her vehicle. There’s no evidence that a similar hack was performed on the Model S involved in the accident.

Of course, a mobile device could have been used to watch a video, but the truck driver made no reference to it in his claim nor does the police report.

Update: Sergeant Kim Montes of the Florida Highway Patrol now says that a portable DVD player was found in the vehicle, but she didn’t specify if it was playing during the accident.

Yesterday, we reported that the Model S driver who died in the crash was Joshua Brown, an active Tesla community member, who just a month prior to his accident, credited Tesla’s Autopilot for saving him in near miss caught on video.