The Tesla Supercharger in Newark, Delaware, is an important charging spot for Tesla owners traveling on the east coast. It is one of Tesla’s biggest location, with 12 Supercharger stalls, and it is strategically located on I-95 between Washington and New York.

Earlier this month, someone backed into one of the stalls and damaged it. A week later, the station came offline and has been down for the past 4 days . Now with the fourth of July coming, a lot of traffic is to be expected along Tesla’s Supercharger routes and owners are starting to worry about the response time to fix any issues with the charging network.

The Newark station received a much-needed update earlier this year when it was upgraded from 4 to 12 stalls back in March. It made the news again earlier this month after a Model X owner blocked 3 stalls in order to charge his SUV with the bike rack still attached.

Not long after the Model X incident, one of the stall was found to be damaged after what clearly looks like someone backing into the Supercharger.

John Davis of Davis Custom Digital stopped by the Supercharger and took a few pictures of the stall after it was damaged (reprinted with permission):

Tesla asks not to use any damaged equipment and to report it immediately to its help phone line.

It could be only a weird coincidence that the Supercharger went down after this incident since over a week passed before it went offline. It’s also difficult to understand how one damaged stall can shut down the entire 12-stall station – so it could be unrelated.

The damage was reported on June 14 and the first report of the station coming offline was on June 22 (via Plugshare): 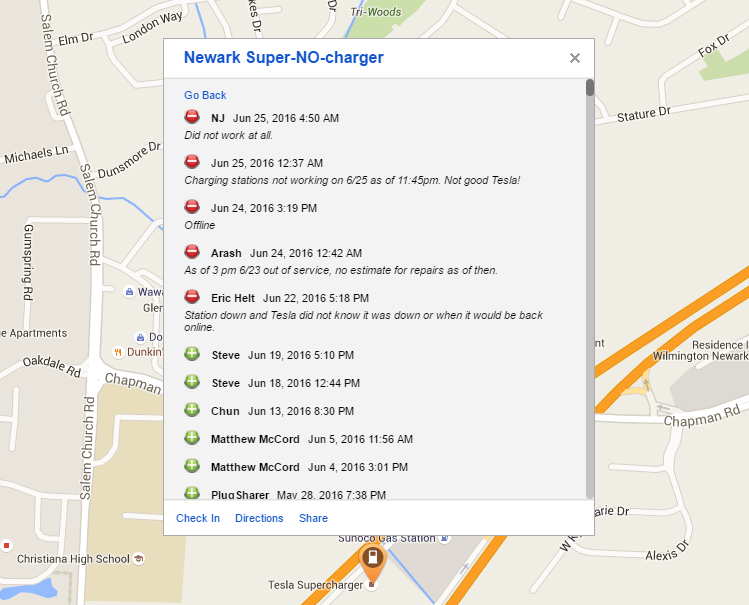 As of today (June 25), Tesla’s Supercharger service says that the company is waiting for the local power company in order to power up the station without specifying an ETA.

Electrek contacted Tesla representatives on Friday to get more information about what caused the issue and to better understand what resources are in place in order to resolve any issue when stations go offline since Tesla owners are starting to worry about the automaker’s response time. Representatives didn’t respond to our inquiry and we will update if it changes.

Additionally, local owners report that Tesla’s navigation system still suggests to stop at the Newark charging station when planning a route in the area even though it is offline. Here’s Tesla’s trip planner suggesting a 5-minute charging session at Newark in order to get to Hamilton Township: 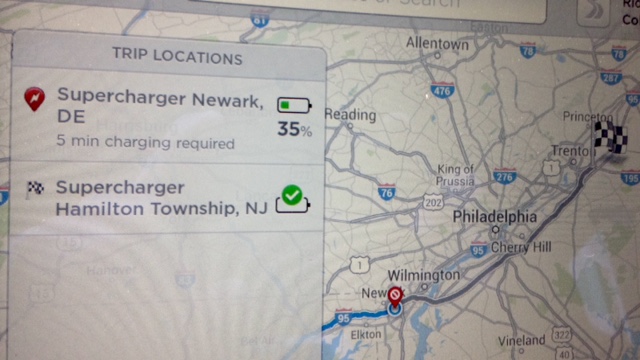 The picture was taken by Lanny from PluginSites.org, a website tracking charging station on the east coast. He suggested some alternative via ChargePoint for owners with a CHAdeMO adapter:

On the other hand, Tesla’s customer service suggested the J-1772 charging stations located at the same Welcome Center as the Supercharger. We will update when we get more information.

Update: the Supercharger is now back online: