Just a week ago, we reported that the first shipment of Model X’s has cleared customs and that the company’s stores and service centers, also sometimes referred to as “experience centers” in China, are receiving the all-electric SUV.

Now we learn that Tesla hosted a special delivery event for the first 6 Model X owners in China.

The two executives personally handed the keys to the first 6 Model X owners in front of media and other guests.

Ren commented during the delivery ceremony:

“The Model X is the next Tesla to accelerate the transition to sustainable energy world. Our corporate vision for products and technologies embodies the essence of once again bold innovations and breakthroughs, and the pursuit for the Tesla owners to have a premium future automotive experience.”

The company shared a few pictures of the event on its Chinese blog:

via Jon McNeil, Tesla President of Global Sales, on Twitter

Interestingly, the first owners almost all chose white for the color of their vehicle. It is a popular color in cars in China since it represents the ‘metal element’ and symbolizes purity in Chinese culture. Though it is also associated with death and is used predominantly in funerals.

During the event, Tesla also highlighted the progress it made in the country since its debut just over two years ago. The automaker has opened nearly 20 experience center in mainland China. It also expanded its charging networks with now more than 400 Superchargers at close to 100 locations and more than 1,300 Destination Chargers. 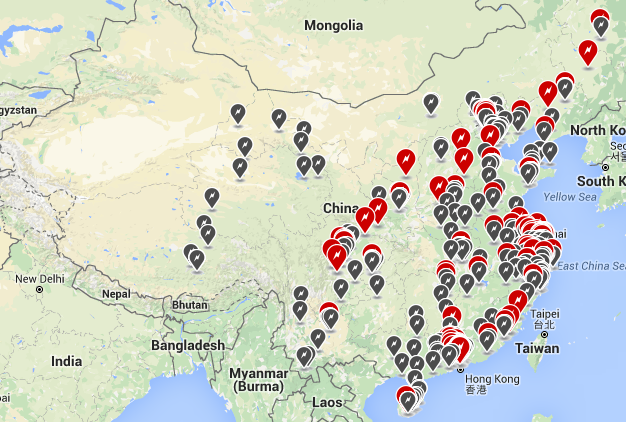 In the past, Tesla admitted to weakness in sales in the China which it attributed in part to misconceptions about charging. It explains why Tesla put a lot of effort in expanding its Chinese charging network which grew faster than in any other country. The company also launched ‘Tesla Charging Partner Program’ in China to promote a national EV charging standard.

While only Model S owners have been able to use the network in China, now the first few Model X owners will be able to take advantage of it. Based on a tally, there are over 2,600 Model X reservations in mainland China and more than 700 in Hong Kong.

The Model X’s HEPA air filter system, also marketed as a  “Bioweapon Defense Mode”, is expected to drive sales in China where air pollution is a constant problem. You can read more about it here: Tesla: “Bioweapon Defense Mode is not a marketing statement. You can literally survive a military grade bio attack by sitting in your car”