How did this Tesla Model S end up on top of a Toyota?

We’ve seen our fair share of Tesla Model S crashes lately, some more impressive than others, but this one from Florida is particularly strange: a parking lot accident with enough momentum to launch the Model S in the air and land on top of a Toyota Camry.

The accident happened this weekend in Plantation, Florida. The Sun Sentinel reported on the accident:

“A driver briefly dozed off behind the wheel in a Plantation parking lot Saturday, causing his car to jump a curb, land on top of another car and damage several other vehicles, authorities said.”

Apparently, the passenger in the Tesla realized that the driver was dozing off and grabbed the wheel which ultimately caused the crash. No one was injured and only the people in the Tesla were in any of the vehicles involved in the accident.

The Plantation Fire Department shared a picture of the aftermath: 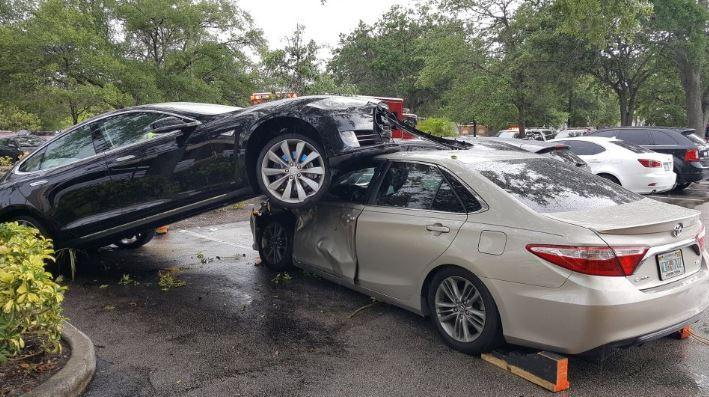 It’s almost unbelievable that the car ended up in this position while driving at parking lot speed – or even at an excessive speed for a parking lot.

While the Model S didn’t need to clear the height of the Camry to end up in this position as it could just have cleared the hood and still applied torque on the rear-wheels to move on top of the vehicle, it’s still impressive for a “parking lot accident”.

We are talking about launching a close to 5,000 lbs vehicle in the air. I know it hit the curb, but still…