There’s no denying that the Model 3 is already having an important impact on the auto industry even 18 months before it is set to enter production. The staggering number of reservations it received is sending a clear message to the industry that there’s demand for a compelling long-range electric car in the mid-luxury market.

Apparently, Nissan thinks that the LEAF fits the bill. Don’t get me wrong, the LEAF is an interesting car, but it is also the same price as the Model 3, clearly not a mid-luxury vehicle and the current version shouldn’t be considered “long-range”.

Nonetheless, Nissan just launched a new national ad campaign with a clear goal to try to convince some of the close to 400,000 Model 3 reservation holders to buy LEAFs instead.

The ad (above and full version below) reads:

It’s a direct attack on Tesla’s Model 3 reservation process which requires a $1,000 deposit and to stand in line at its retail locations during the first day.

The Japanese automaker spent a lot of money on this campaign. According to Autonews, the ads appear in Friday’s New York Times, Los Angeles Times, USA Today and The Wall Street Journal. 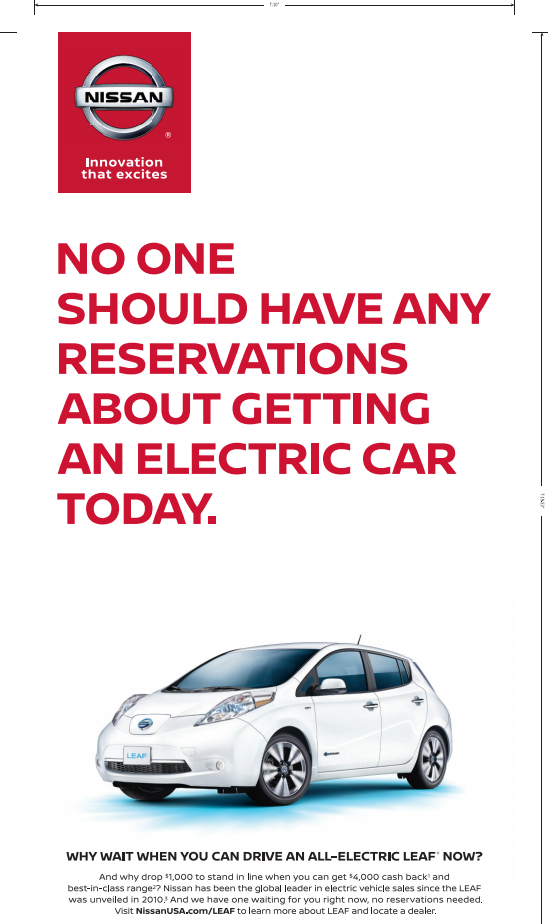 Nissan really needs this campaign to work. LEAF sales were down 42.8% in the US in 2015 versus 2014. Sales have been steadily declining as the vehicle launched in 2010 so badly needs a refresh.

I suppose it’s a fair attempt by the automaker, but somehow I doubt that anyone who placed a reservation for the Model 3 didn’t know of the existence of the LEAF prior to doing so. I don’t see how this effort will change their minds. Maybe get an electric lease until the Model 3 is available?

Either way, it plays right into Tesla’s mission to accelerate the advent of electric transport as it appears that the Model 3’s success as pushed Nissan to spend more money advertising its electric vehicles.