Next week, the California Air Resources Board (ARB) will hold a public workshop on the FY 2016-17 Funding Plan for Low Carbon Transportation and Fuels Investments and AQIP. Under the current proposal, the Clean Vehicle Rebate Project (CVRP) would receive $230 million in funding through 2017.

Earlier this month we reported on a significant change in the CVRP that will be effective this week. The rebates will be increasing for low- and moderate-income drivers, while it will also introduce a cap for high-income drivers.

The new CVRP program will receive about half of ARB’s $500 million in funding for Low Carbon Transportation. 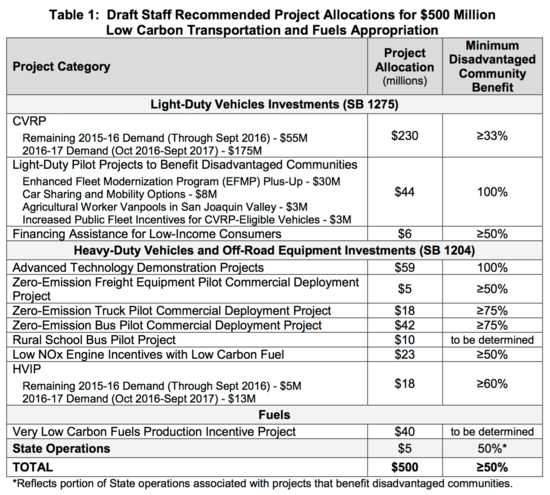 The program has been heavily criticized in the past for providing subsidies to high income Californians. The new budget and restrictions are clearly intended to mitigate those criticisms.

According to the Center for Sustainable Energy (CSE), the CVRP has issued more than $291 million in rebates for more than 137,200 vehicles since 2010. It will be interesting see how those statistics will change with the new income restrictions on the program and of course, the new electric vehicles coming to market in the next few months.