HTT and Slovakian government are exploring a Hyperloop route between Budapest, Vienna and Bratislava

Hyperloop Transportation Technologies (HTT), not to be confused with Hyperloop Technologies (HT), announced today that the company has reached an agreement with the Slovakian government to explore potential routes for a hyperloop which could connect to Austria and Hungary.

HTT’s hyperloop concept is based on Elon Musk’s idea to create a new mode of transport in a reduced-pressure environment, taking the form of a tube, in which it will be easier to transport people or cargo in “pods” at high-speed and efficiency. In HTT’s case, it could as fast as 760 mph.

According to HTT (via CrowdfundingInsider), Bratislava-to-Vienna route is estimated to take 8 minutes at Hyperloop’s full speed, while a Bratislava-to-Budapest trip just 10 minutes.

The startup is also considering a route between Bratislava and Košice—a distance of 400 kilometers (250 miles), which would now take only about 25 minutes instead of the 4.5 hours it currently takes by car.

Vazil Hudak, Minister of Economy of the Slovak Republic, commented on the agreement;

“Hyperloop in Europe would cut distances substantially and network cities in unprecedented ways. A transportation system of this kind would redefine the concept of commuting and boost cross-border cooperation in Europe,” said Hudak. “The expansion of Hyperloop will lead to an increased demand for the creation of new innovation hubs, in Slovakia and all over Europe.”

Here’s the current recommended car route from Budapest to Vienna, while stopping by Bratislava: 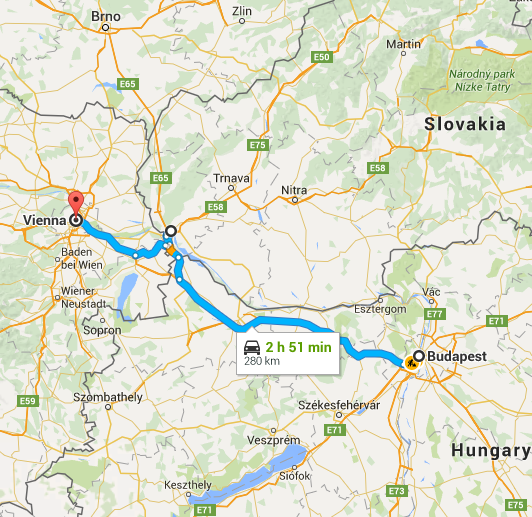 HTT is developing this possible first full-scale hyperloop route alongside its Quay Valley project in California in a new city midway between Los Angeles and San Francisco, where it plans to build a 5-mile long track as a proof-of-concept.