A spectacular short video posted to Youtube earlier this week shows a Nissan LEAF on fire. According to a post on the My Nissan Leaf forum, the event happened on September 1st in North Texas.

This is quite possibly to first reported instance of a Nissan LEAF catching fire even though Nissan sold over 180,000 LEAFs to date worldwide.

Currently not much is known about the fire. We will update as we get more information.

The incident happened at the intersection of Cross Timbers Road and Kirkpatrick Lane in Flower Mound, Texas, according to the local police department: 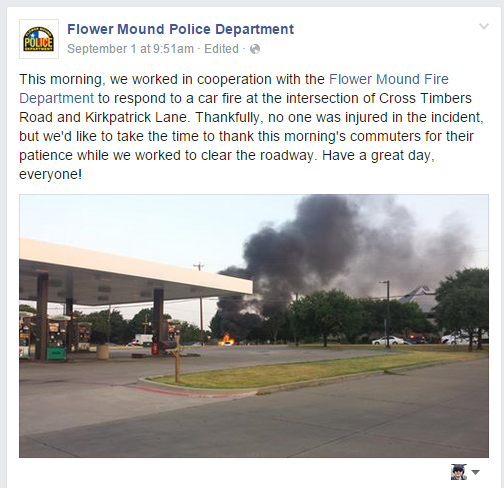 Although the source of the fire is still unconfirmed, the battery pack is unlikely to be the cause of it. Nissan built the LEAF’s battery pack with safety in mind and used only the most secure cells possible. The Examiner, which is reporting on the incident, posted a video of an individual actively trying to destroy the LEAF’s pouch battery cells with little success: