The Power of Controllable Charging Load – Is Tesla working on a “bi-directional” home charging station?

Excerpts from Tesla’s Chief Technology Officer JB Straubel’s recent presentations about the integration of energy storage and electric vehicles into the grid, leads us to believe that Tesla Motors is likely working on a bi-directional home charging station. I am talking about a charger that could not only charge your car’s battery pack, but also draw electricity from it to power your home, or to feed back into the grid, not unlike Tesla’s Powerwall.

Nissan was working on something similar with their “LEAF to Home” program a few years ago, but we haven’t heard about the project in a while. At first, it aimed at providing power in case of emergencies, something the Japanese company felt compelled to deliver when the country was still recovering from the tsunami and the frequent power outages in the aftermath. Later, the company changed the focus of the program to present the project as an integration of the Nissan Leaf’s battery pack into the electric infrastructure of a modern home – a true energy storage product.

Under the program, a Leaf owner would be able to use the Leaf’s 24 KWh battery pack and 6 KW on-board charger to connect to a Power Control System (PCS on the diagram). The PCS draws from the car’s battery pack and power the home through the power distribution board. 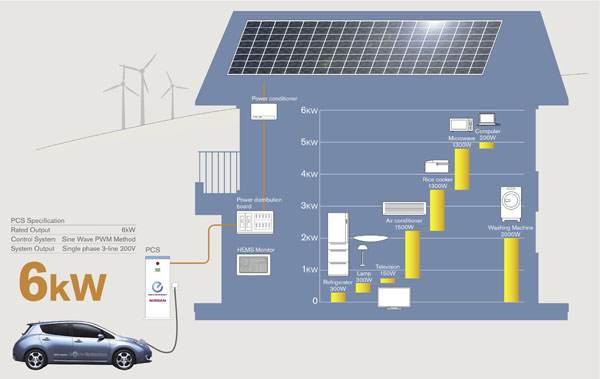 The system is an interesting alternative to a backup generator (or 7-10kW Tesla Powerwall). It also has the potential to serve as an energy storage system for renewable energy generated from solar panel, or even help offset peak power demand in a “smart-grid” environment.

The electricity needed to power electric vehicles currently isn’t a significant part of the demand on the grid, but it could change fast with EVs becoming increasingly popular. As the global fleet of EVs is increasing, electric cars could become a problem for the grid, or if handled well, they could actually be a solution to the grid’s problems.

JB Straubel, Tesla’s Chief Technology Officer, is well aware of the importance of managing the charging load of a future large electric vehicle fleet; something he refers to as “controllable charging load”. Earlier this year, during a presentation at the THINK conference, Straubel had the following to say about power and energy capacity of Tesla’s future fleet of cars:

10 GW of power demand or 75 GWh of energy storage – so these are really big numbers and they both scare the electric utilities, but also get them excited because we can do some interesting and cool new things…

The power and energy storage numbers are based on a fleet of 1,000,000 Tesla vehicles in 2019. Here’s the slide that Straubel was showing when he made the above comment: 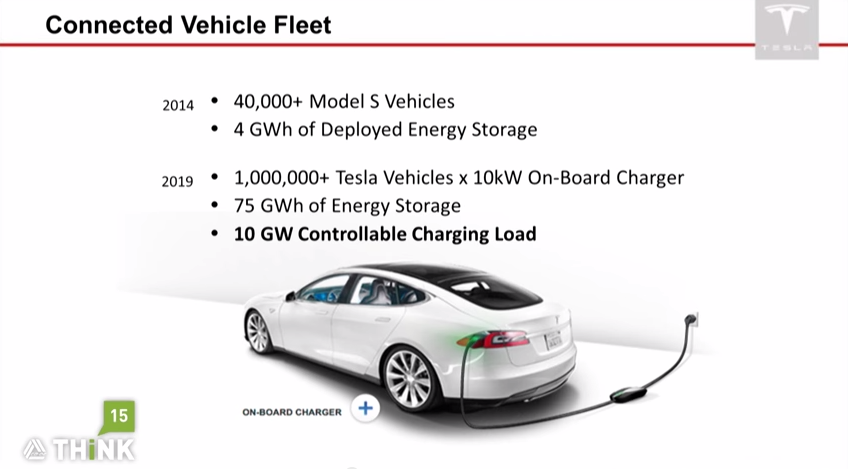 Even though these numbers only represent a small fraction of the global car fleet, they already start to show decent power demand and energy storage capacity. Straubel didn’t go into details about what those “interesting and cool new things” could be, but we can think of a few possibilities.

Last week, we wrote about BMW testing a new program to gain some control over the charging of their i3 fleet. Under the program, PG&E, a California-based electric utility, can request BMW to manage the charging sessions of BMW i3 owners in order to control the power demand load. BMW i3 owners can let the company push their charging time for up to an hour in order to reduce demand at peak usage. BMW i3 owners earn cash rewards depending on how much they let BMW and the local electric utility manage their charging time.

BMW is currently testing the program with only 100 i3 owners in the Bay Area so it can’t really reduce power demand by much, but the program will help BMW understand charging behavior and learn at which point it becomes an inconvenience for owners to have their charging time delayed.

A similar program, which could be described as a power demand management service for electric utilities, might be one of the “interesting and cool new things” Tesla’s CTO was talking about at the THINK conference. But if Tesla was to offer a power management service through their car fleet, it could be something much more interesting with a bi-directional charging station.

A bi-directional charging station would explain why Straubel was talking not only about the charge load of Tesla’s car fleet, but also about the energy storage capacity of their cars. On the slide from the THINK conference from May 2015 (see above), he noted a potential 75 GWh of energy storage in 2019 and below is a slide from June 2015 at a presentation for the Energy Information Administration (EIA): 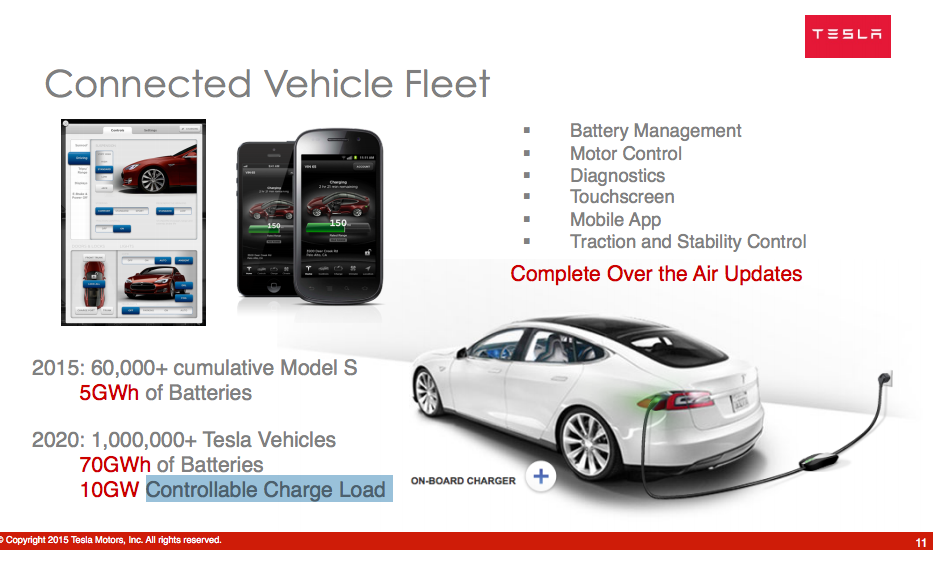 This slide is interesting because he included the controllable charge load and the energy storage potential on the “Connected Vehicle Fleet” slide. Meaning Tesla is likely planning to control their fleet’s energy potential through the Model S’ connectivity.

Straubel’s recent presentations seem to indicate that Tesla could go beyond Powerwalls and Powerpacks to provide power management services to electric utilities, and instead tap into the enormous energy storage and controllable charge load capacity of Tesla’s existing and future vehicle fleet. Indeed, at the end of the video, Straubel “predicted” …

The full video is here:

Also, various US states including New York’s NYSERDA are offering home battery rebate incentives which, when applied to a Tesla vehicle, could add additional incentives to the cost of the car.

Whether Straubel is only talking about a charge time management program or a full energy storage service through bi-directional charging stations, we clearly see “interesting and cool new things” coming with the integration of electric vehicles in the energy industry.