SolarCity is currently building a solar panel factory in Buffalo. The construction site is not unlike Tesla’s Gigafactory under construction in Nevada. SolarCity’s facility, which could also be dubbed a “Gigafactory” since its planned output is also estimated in gigawatts, has a similar 2-storey steel structure as the one Tesla is building for its battery factory.

Update: SolarCity and Tesla are not sharing any designs or contractors for their respective factory projects according to Kady Cooper, Director of Communications at SolarCity.

The plant, which should start low volume production in 2016, is expected to produce 1 GW of solar modules per year at planned capacity starting in 2017, and the company says it could expand the facility to 5 GW. According to the general contractor in charge of the project, LP Ciminelli, the structure is 35% complete. In comparaison, drone footage of Tesla’s construction site in Nevada emerged last week and Elon Musk, Tesla’s CEO and SolarCity’s Chairman, confirmed the structure seen in the video represents about 25% of the final building.

The company will produce solar cells developed by Silevo, a company they acquired last year. The solar cells currently produced by the company at their 32 MW facility in China are operating at 21% efficiency, but SolarCity expects to achieve up to 24% at the new factory in Buffalo. 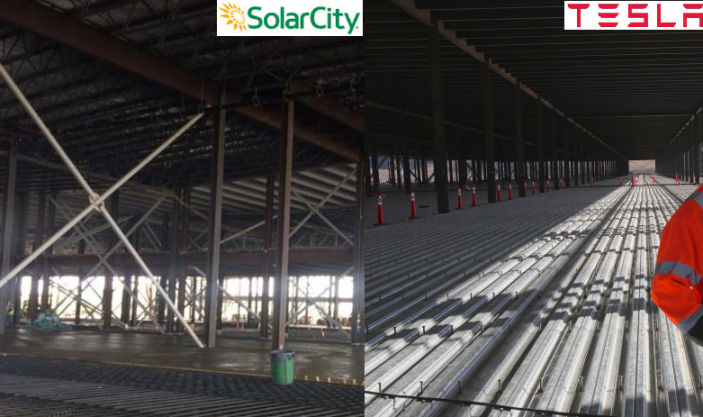 The factory, which is being financed by the government through New York’s “Buffalo Billion” initiative, is expected to create 3,000 permanent jobs in the region and up to 5,000 in the state. The factory will be paid for and owned by the state at an expected cost of $350 million for the building and $400 million for equipment. SolarCity will have the right to operate the plant for 10 years at the cost of $1 per year, but they are required to spend $5 billion in the course of their operations at the facility through the 10 year period.