Tesla’s battery swap stations to open up by end of the year but is it just a stopgap?

Tesla will open its first battery-swap station within the next few months, the electric car company has confirmed to SlashGear, offering drivers of the Model S a ninety second way to “refuel” their cars. First demonstrated in June 2013, the battery exchange system eschews even the rapid charging of Tesla’s Supercharger network in favor of a wholesale exchange of the batteries themselves. The process would be fully automatic, too, meaning the driver won’t even need to step out of the car in order to replenish their charge levels.

Engadget believes that the renewed interest in the swap point, which will first be somewhere in between San Francisco and LA and doesn’t require the drivers to leave the car during the 90 second transaction, is due to revised California ZEV Credits. I’m not so sure that this just isn’t an ordinary ramp up time period.

Tesla may have decided to redouble its battery station efforts for economic reasons, too. As pointed out by Bloomberg, California stripped Tesla of some of its zero-emission vehicle (ZEV) credits earlier this year after revising its rapid refueling rules. The new standard requires that cars be fueled to a 285 mile range in 15 minutes, meaning the Model S — which can receive a 160-mile supercharge in about 30 minutes — no longer qualifies. Meanwhile, hydrogen-fueled cars continue to receive the maximum ZEV credits, since they can easily be refueled in that time. Prior to the decision, Tesla had been selling the excess ZEV credits to other automakers, which is one of the reasons it turned a profit for the first time last year.

Another reason for the slow ramp of the swap stations? Tesla might be trying to get its superchargers up to that standard. In an interview last year with the MIT Technology Review, CTO JB Straubel said that Supercharger technology would continue to improve to the point where Tesla could meet California’s new standards.

And perhaps Tesla could automate that charging so you don’t need to get out of the car to supercharge. Musk mentioned his intensions there at the D event but already solutions are being devised (this from Geneva motor show via Reddit): 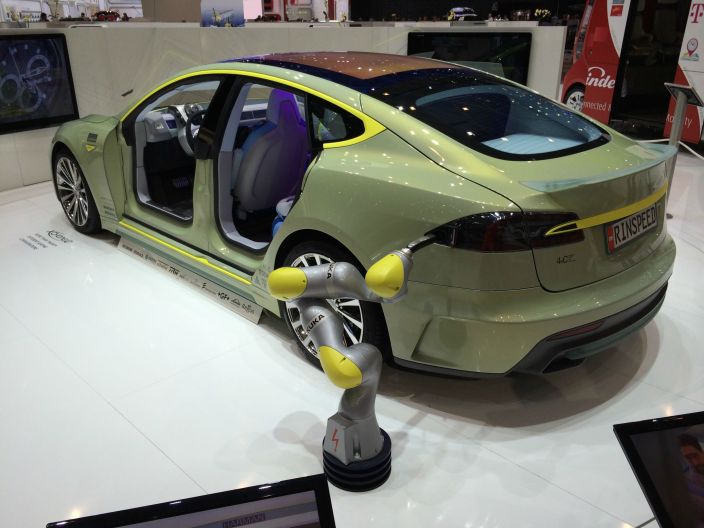