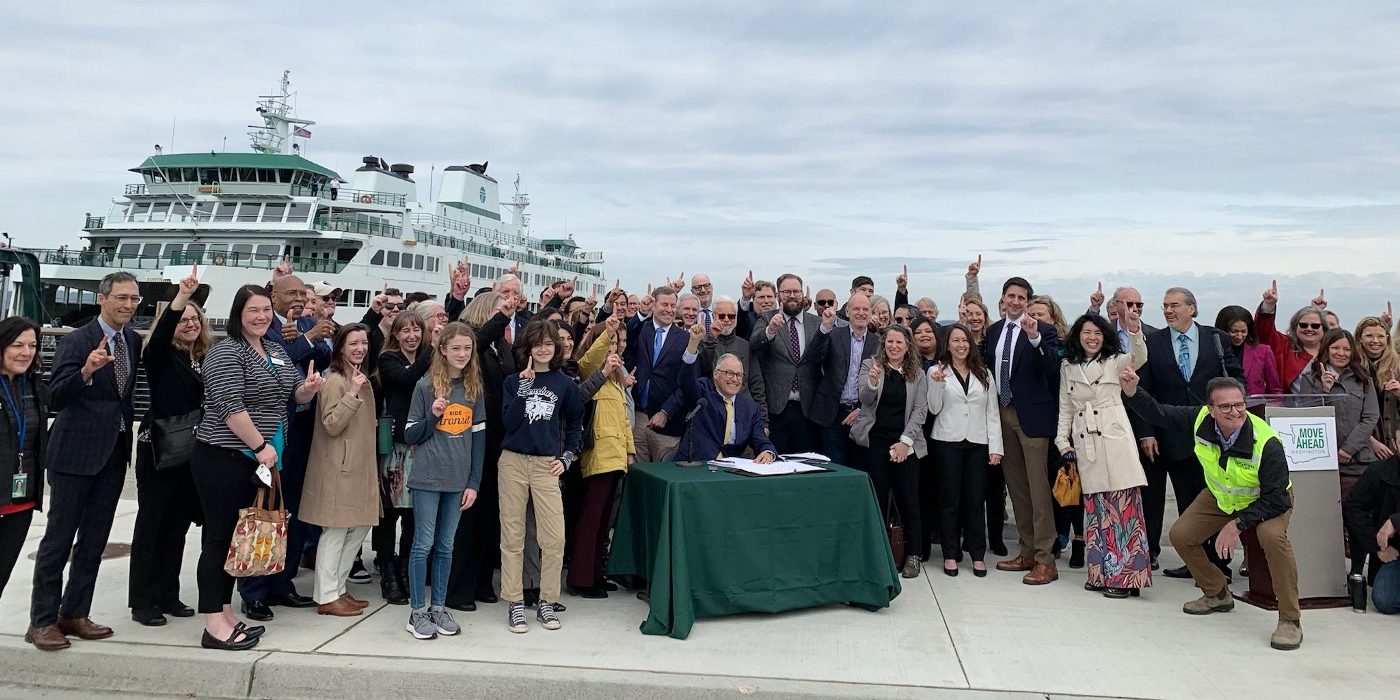 Washington state has set a target that all vehicles of model year 2030 or later sold, purchased or registered in Washington state be electric vehicles. The bill was signed today by Gov. Inslee, making Washington the state with the earliest all-electric new car target in the nation.

A similar effort happened once before, but then Governor Inslee vetoed it due to concerns with the road usage charge included in the language of the bill. Road usage charges would be a more intelligent way to fund roads than current methods (which generally involve some combination of gas taxes, registration fees, road tolls, and general funds, depending on the state), but Inslee claimed that he didn’t want to tie the two ideas together, since a failure to adopt a road usage charge would mean scrapping the former bill’s 2030 all-EV requirement.

Washington has relatively clean and cheap electricity as compared to almost every state, given the state’s high hydropower mix. It also has relatively high gas prices and more public chargers than most states, making the state an ideal place to own an electric car. The main downside is their dumb EV fee – which the last bill’s road usage charge might have helped avoid.

The current effort is part of a $16.9 billion transportation package called “Move Ahead Washington.” The bill covers lots of transportation issues and includes a section which reads thusly:

Sec. 415. (1) A target is established for the state that all publicly owned and privately owned passenger and light duty vehicles of model year 2030 or later that are sold, purchased, or registered in Washington state be electric vehicles.

(2) On or before December 31, 2023, the interagency electric vehicle coordinating council created in section 428 of this act shall complete a scoping plan for achieving the 2030 target.

Notably, this looks like it would apply to any vehicle registered in Washington, not just sold and purchased. This suggests that gas cars of the model year 2030 bought outside of Washington could not be registered inside the state of Washington, which would eliminate a possible workaround through which people might import dirty gas vehicles into the state.

More specifics will be worked out later, and guidance will be provided for all levels of Washington government and industry by an interagency electric vehicle planning council which will work out the infrastructure needed to prepare for an all-electric vehicle fleet.

This moves Washington into the lead nationwide in the effort to end gas vehicle sales, on a much more reasonable timeline than the 2035 laggards in California, Massachusetts, and New York (and…. every other state which has not set a target).

As we’ve shown before, 2035 is not ambitious at all, because that date could be achieved by simply continuing the status quo with every automotive industry effort and simply not starting new development on gasoline vehicle models from here on out – which is something any carmaker ought to be doing at this point anyway.

There have been a few other 2030 efforts in the US, though Washington’s is the first to be adopted at the state level. The California Democratic Party and several California cities have endorsed moving the state’s timeline to 2030, Hawaii and Rhode Island have introduced bills targeting a 2030 ban, but otherwise, most states have either made no effort or have stuck with the unambitious 2035 timeline. The earliest worldwide “target” is in Norway, which wants to hit zero gas car sales by 2025, but might achieve that three years sooner.

Washington state’s bill also calls this a “target” rather than a “requirement” or a ban on gas vehicle sales, so it’s possible that some gas vehicle sales will still trickle through past the 2030 target. Gov. Inslee’s press office said that 2030 is a goal, but that 2035 is a requirement – the 2035 number ties Washington to California’s standards, but this bill sets Washington state’s intention to do it even earlier. But given the example of Norway, where there has been a virtual end to gas car sales three years before the target is reached, who’s to say that Washington can’t do similar and see only a trickle of gas car sales by the end of this decade? After all, we at Electrek wonder who’s still going to want to buy a gas car in a decade anyway?

Nationwide, US voters widely support all-EV sales by 2030, but states and our national government have as yet refused to adopt this desired timeline – which is also a necessary one if we are to avoid the worst effects of climate change. President Biden wants to make the entire US federal vehicle fleet electric, a plan that is compromised by corrupt US Postal Service leadership planning to spend billions on gas guzzlers. And 12 governors asked for a 2045 timeline last year, which is, again, an extremely weak commitment given the state of the climate and momentum in the automotive industry. Even the US Army recognizes the necessity of converting to electric, wanting to electrify all non-tactical vehicles by 2035 (and light-duty ones by 2027).