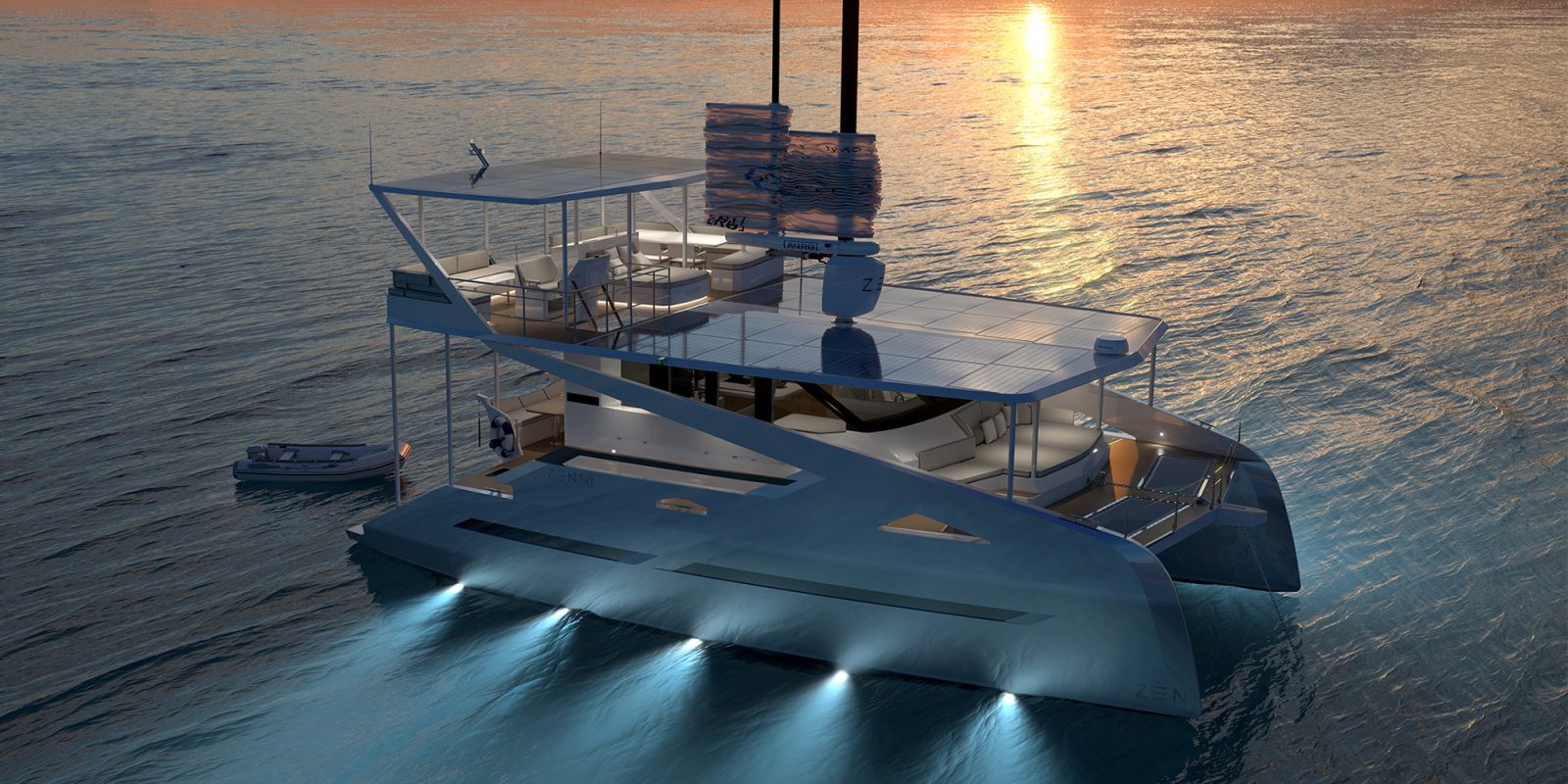 Infant electric boat manufacturer, ZEN Yachts, has announced its first US order for its flagship ZEN50 solar electric catamaran. The zero-emission sailing yacht is currently under construction in Europe and will arrive with some pretty luxurious features including two kitchens, a high-tech fully-automated wingsail, and Starlink internet from SpaceX.

ZEN Yachts is short for “Zero Emission Nautic Ltd. – an ocean-friendly boat manufacturer founded in 2021 and incorporated in Malta. To help propel the popularity of zero-emission yachts both on and off the water, the company has combined wind sailing with electric propulsion.

The main pack is supported by an entire rooftop of solar panels, offering a peak power of 16 kW, allowing the ZEN50 to cruise at 4.5-5 knots using the power of the sun alone. The electric propulsion system is backed by an Oceanswings OWS 3.2 wingsail by Ayro, making the ZEN yacht the first series production leisure craft to feature this fully-automated wingsail technology.

With its first catamaran hull on the way, ZEN Yachts has announced its first customer, and they should be sailing in the US soon.

First ZEN Yachts customer should be sailing in early 2023

According to the press release announcing ZEN Yacht’s first sale, the ZEN50 was designed from scratch with a slew of unique technology. For instance, the full-carbon catamaran is lightweight enough that, combined with its 1:1 solar power versus displacement ratio (16 kW / 16 tons), it is completely energy self-sufficient.

Award-winning naval architect Julien Mélot, who designed the ZEN50, elaborated on what the company means when it describes the vessel as a no compromise zero-emission catamaran:

The majority of solar catamarans currently on the market are equipped with a large generator, making them de facto hybrid diesel-solar-electric boats. They offer great speeds in a variety of conditions but are less eco-friendly than true zero-emission vessels. We wanted the ZEN to be a true solar boat, that’s why the first unit in construction is not equipped with any generator and will not carry a single drop of fossil fuel onboard (indeed even the tender is electric and recharged by the mother vessel).

In addition to providing endless energy for at sea voyages, ZEN Yachts explains that the ZEN50 can also be equipped with other zero-emission tech such as a dive compressor, e-foil, electric jet board, or even an electric water maker.

Inside one of the boat’s multiple hulls, the captain and their passengers will be able to relax in two large day beds, three dining areas, multiple ensuite cabins, and a saloon. To stay in touch during long, energy self-reliant trips at sea, the electric yacht maker is also hoping to eventually include satellite internet from SpaceX’s Starlink… emphasis on eventually. Here’s an official statement from ZEN Yachts:

Our first Client wants Starlink installed on his yacht. Based on announcements by SpaceX, this tech will become available for RV and marine applications. Therefore, we will install it on the ZEN50 of our first client (and likely others) when it becomes available. As the first ZEN50 is only due for sea trials in Spring ’23 and Transatlantic crossing later that year or the following, there’s hope on ZEN Yachts’ side that Starlink for marine applications will be available by then.

Traveling on electric propulsion alone might be tough at sea, even with the solar backup. That’s where the OceanWing wingsail comes in. Combined with the e-motor, the ZEN50 can reach a max speed of 14 knots (~16 mph). For continuous cruising, the wingsail and solar panels combine to deliver 6-10 knots of speed (7-11.5 mph). All three technologies combine in the ZEN50 yacht to deliver over 180 nautical miles of range over a 24-hour span.

As you may have noticed from the images above, our only glimpse of the ZEN50 so far is company renderings. Zen Yachts said it expects to complete and deliver the first solar electric sailing yacht early next year. As soon as the first hull leaves the mold, the company is building a second one.

Additionally, Zen Yachts is opening a showroom in Barcelona’s Marina Vela, set to open in April of 2022. Perhaps we can get out there for a visit, although it might be easier to wait for the ZEN50 to arrive to that customer in the US… whoever that might be.

Lastly, the company said it is still calculating the overall carbon footprint of producing the ZEN50 and will make that information public when it’s totaled. Regardless, Zen Yachts has already committed to reaching a net-zero carbon footprint by 2030.