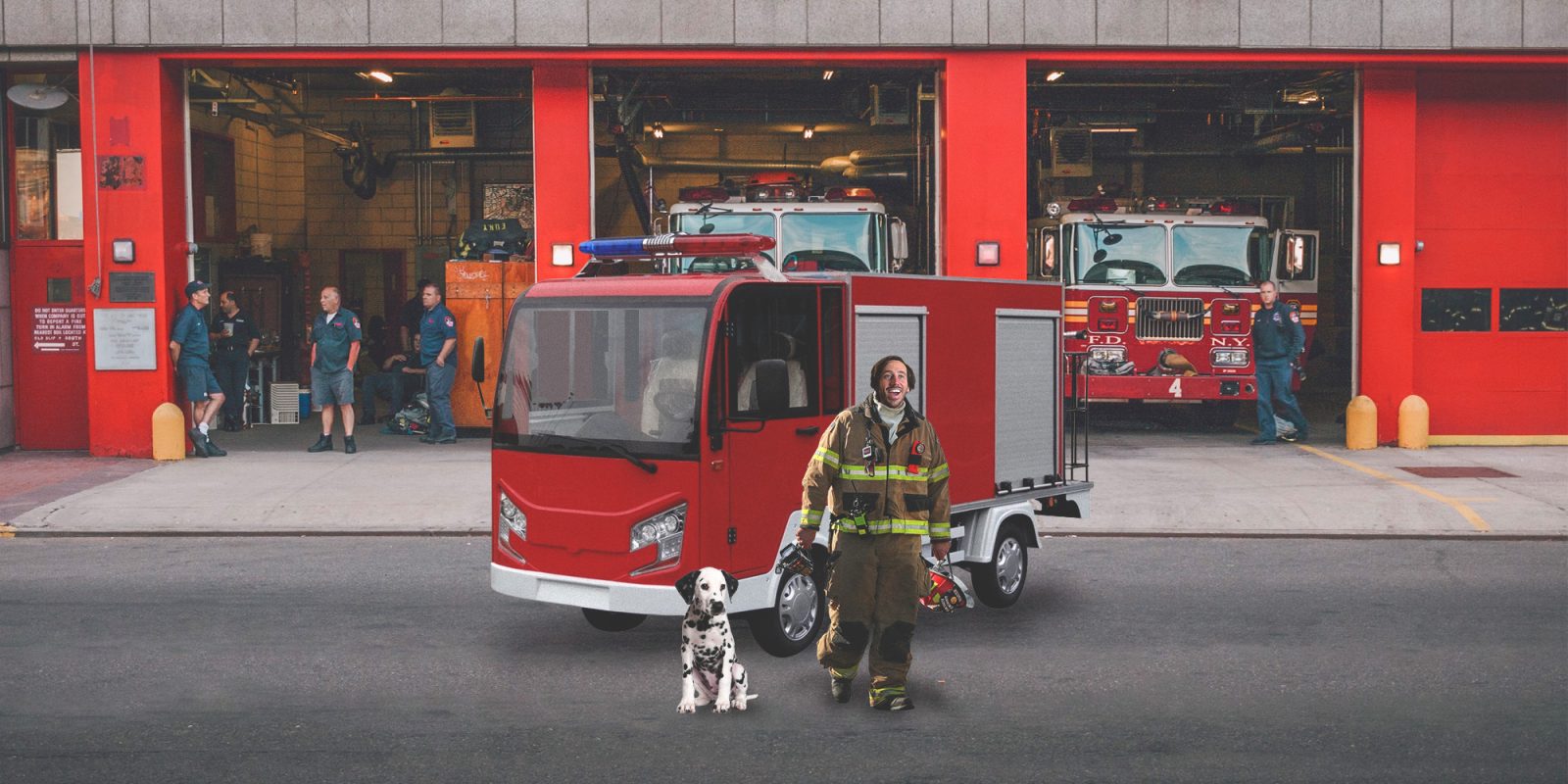 I’ll admit that most of the wacky cars and other assorted vehicles that I find for the Awesomely Weird Alibaba Electric Vehicle of the Week column are largely just for fun. They’re all about having the coolest, weirdest, or craziest personal vehicle on the block. But this week I think it’s time I buckled down and actually made a contribution to society instead of just enjoying my hedonistic electric vehicle ways. And that’s why I’m starting up my own fire service with the most adorable little electric fire truck that money can buy.

The fact that you can even buy your own private fire truck already gets me giddy.

But then get a load of just how awesome this thing is!

The 4.5 meter (15 foot) truck has everything you need to protect your local neighborhood from the next backyard barbeque gone awry.

There’s a light bar (which seems to be jacked from a police car, but we’ll just ignore that detail), a single giant windshield wiper, roll-up doors for all your firefighting equipment, and seating for two in the cab!

If two people aren’t enough manpower for the biggest fires, you could carry several more brave firefighters in the cage on back. There’s a turret-mounted water cannon back there too, which could serve double-duty as a fun little road rage weapon the next time someone honks at you for no good reason.

Though if people are honking at you in this thing, it’s probably because you’re driving around at 28 km/h (17 mph), which is the mini fire truck’s top speed.

Oh, whoops. I thought you were going to say “cheap.” Welp, sorry folks. Cheap is the only option I have for you. This electric fire truck may be a bit pricier than most of the couple-thousand-dollar weirdomobiles that I usually find for you. But at US $8,500, it’s really not that much cash for what you get in return. I’m not sure how much real fire trucks cost, but I’m guessing it’s a lot more than this.

And that $8.5k actually buys you some nice features. The seats are apparently real leather (and “sponge foam” filled, if that does it for you), and the fire truck even has a built-in MP3 player and USB port so you can play your tunes. There’s a loudspeaker that I assume is for the siren, but if there’s a way to connect it to the MP3 player and blast 80’s rock ballads while cruising down the road, you know I’m going to do it.

The truck even seems nicely designed with rack and pinion steering, McPherson independent suspension, and hydraulic shocks up front, though the rear gets a solid axle and leaf spring suspension.

The 6,000-watt motor connected directly to the rear axle isn’t exactly going to win any tractor pull contests. And to be honest, you should probably only take the fire calls that are located downhill from your current location – that motor isn’t likely to pull a couple bathtubs worth of water up a steep hill.

But think of all the upsides to driving your own fire truck as a daily driver? You get free parking for life (who is going to ticket a fire truck?), you’re never stuck in traffic (that light bar up top isn’t ornamental, after all), and every now and again you get to make the front page for helping put out a fire while on your way home from the gym. I can already see it: Local hero saves day, extinguishes birthday cake candles on overwhelmed octogenarian’s cake.

Face it, this thing is perfect!

Well, I guess it’s almost perfect. The one main bummer is that the massive 9.6 kWh battery bank is made up of lead-acid battery packs.

What gives, my dudes? Load me up with some real lithium-ion batteries. Not only would that increase the paltry 80 km (50 mile) range, but there’s literally no downside. What’s the worse that could happen? It catches on fire? You’re already on the scene; it sounds straight out of an Alanis Morissette song!

As much as I want to become the proprietor of my very own little electric firetruck service, I know there’s no way I’d be able to swing this with my wife. To be fair, she’s put up with a lot of my weird crap before, but this would probably be a burning bridge too far.

Instead, I’ll just have to enjoy this thing from afar. Unless any enterprising readers of mine want to start up their own private firefighting service. In that case, give me a ring. I’ll be the first down the fireman’s pole to come check it out!