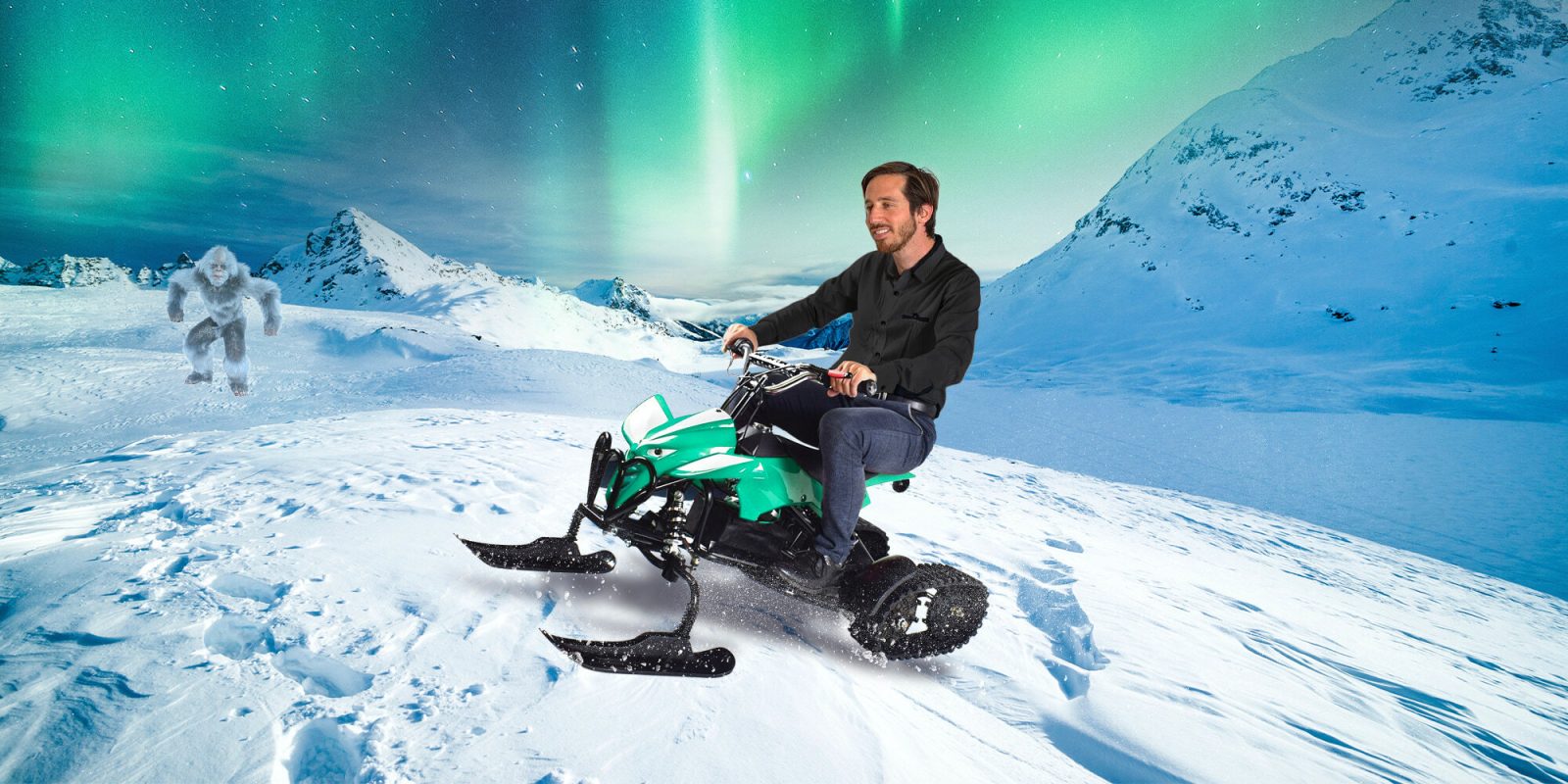 When it comes to snowmobiles, there’s kind of a set way to do things. They’re effectively trikes with a pair of skis up front and a single wide track in the back. But this new take on old-school snowsports seems to have reinvented the idea of just what a snowmobile can be. And it’s just wild enough to earn itself a coveted spot in this week’s edition of the Awesomely Weird Alibaba Electric Vehicle of the Week series.

I’m not about to tell you that this is the most amazing electric snowmobile since sliced bread.

It’s nowhere near as impressive as a real honest-to-goodness e-snowmobile.

And it’s probably not even going to hold a candle to some of those weird European snow e-bikes we’ve been seeing lately.

But you’ve got to respect this thing’s plucky spirit to even go out there and play on the same field as the big boys.

I mean, it’s woefully underpowered for what it’s trying to do. At just 750W (that is presumably spread across its two snow tracks in the rear via a solid axle), it’s more of an underpowered snow quad than anything else.

Though the low weight limit of just 65 kg (143 lb) could be the giveaway that this little snow scooter thing might not be designed for your average Nordic adult. This is a kid’s toy at best.

But it’s an awesome kid’s toy, at least!

The speed may only top out at 15 km/h (9 mph) in speed mode one, but that likely feels pretty fast when you’re inches above the snow. I imagine it’s a bit more than a snow mobility scooter at those speeds. But when you kick it into speed mode two to hit 40 km/h (25 mph), it sounds like you’re in for a seriously good time.

I’m not sure how long the weak 36V and 12Ah lead acid battery will last on a charge. The company claims one hour, but that sounds a bit too good to be true. Even if this thing only puts out a half-hour of jolly-good-joyness, how much more can you ask for at this price? $499 doesn’t normally buy you a lot of electric vehicle, much less something with dual tracks and independent suspension!

Or at least the front skis appear to have independent suspension. It looks like the entire rear might be housed on a single swingarm. But again, at this price, I’m going to call that good enough.

They even give you three colors to choose from, which is more than I can say for a lot of electric bicycle companies right now!

Something tells me if Santa had one of these, he’d be enjoying himself much more each winter. He might not make it to every kid’s house in one night, but he’s got the best excuse ever: supply chain issues!

I’m not saying I’m about to run out and buy one of these things. It hasn’t snowed in Tel Aviv where I live most of the year since the 1950s. And I’m not saying you should buy one either.

But what I am saying is that if you did buy one, you should definitely send me some photos and videos so I can see the thing in action.

As it stands, all I’ve got right now are these videos from the vendor. And how can I trust them? They’re trying to make a sale! And from the dude reading off the poorly written script like he’s in a hostage proof-of-life tape, I’m not sure this is the best place to go for reliable info.

I think that for now I’ll just enjoy the fact that this thing exists somewhere in the world.

If I ever do actually get to ride one, I’ll be sure to report back!