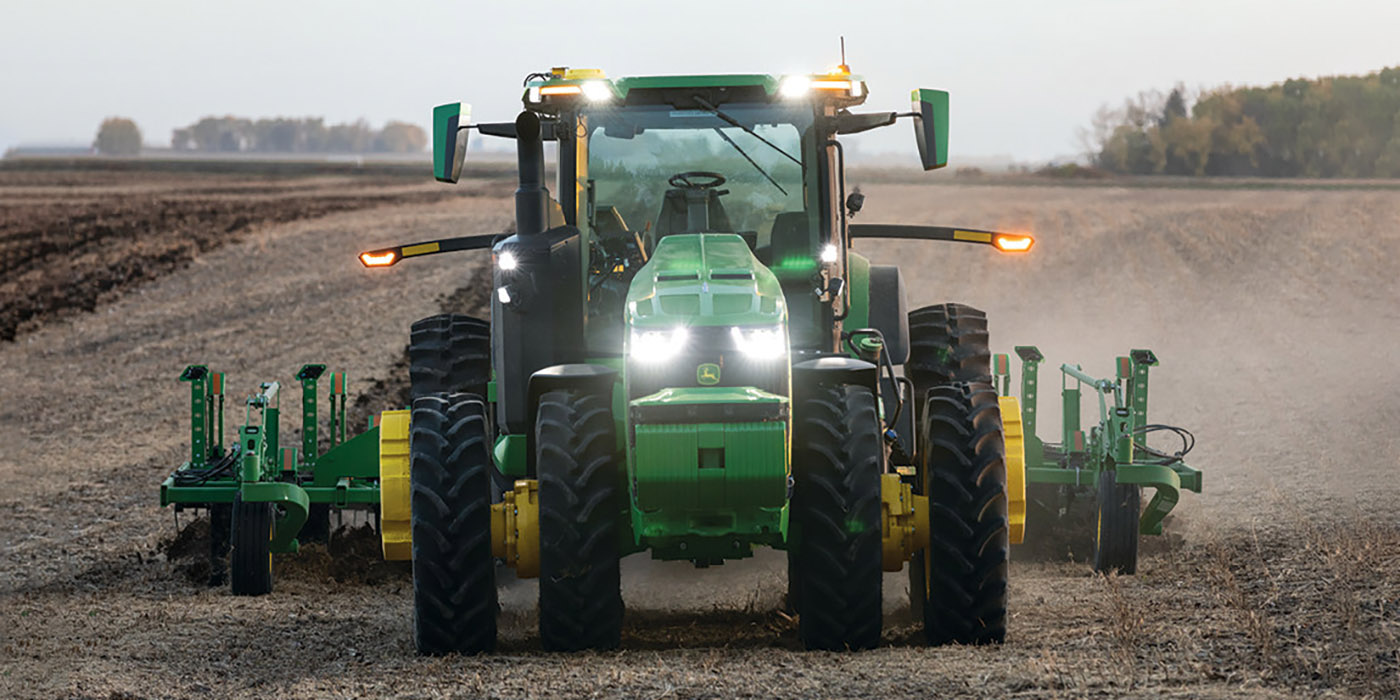 John Deere revealed its first fully autonomous tractor today at CES 2022, building off of what it says are 20 years of AI development – and it’s not a concept. The self-driving John Deere is already up and running on select farms and available for sale.

Built on John Deere’s 8R tractor, the new autonomous product features a TruSet-enabled chisel plow, GPS guidance system, and other advanced technologies, including six pairs of stereo cameras that enable 360-degree obstacle detection and the calculation of distance. Images captured by the cameras are passed through a deep neural network that classifies each pixel in approximately 100 milliseconds and determines if the machine continues to move or stops, depending on if an obstacle is detected. What’s more, John Deere executives spoke of that same neural network being able to differentiate between “weeds” and “crops” on the fly, selecting certain plants for removal while leaving others behind to grow. (Note: I used quotes on “weeds” because a rose is a weed in a cornfield, you know?)

The stated goal of the new John Deere tractor is to help farmers “do more with less.” At the press conference, company reps discussed how future farmers will feed a growing global population with fewer farm workers and less available farm land while, at the same time, reducing emissions. This tractor, they say, is a product that will do just that.

This has been a long time coming.

John Deere has been buying up a number of tech companies in recent years, from the acquisition of AI startup Blue River back in 2017 and to the purchase of EV battery maker Kreisler Electric late last year. Those acquisitions helped the tractor company develop an initial autonomous prototype that became the production model, first put into service on Minnesota farmer Doug Nimz’ farm a few years ago.

“It takes a while to get comfortable because … first of all, you’re just kind of amazed just watching it,” Nimz told c|net. Nimz described himself as, “very, very interested” but also a “little suspicious” of autonomous technology before using John Deere’s machine on his farm. “When I actually saw it drive … I said, ‘Well, goll [sic], this is really going to happen. This really will work.'”

This tractor is “[a] way to get the job done on time, every time and do it at a high level of quality,” Jahmy Hindman, Chief Technology Officer for Deere & Co., explained. “It’s 20 years in the making.” And, as several company reps pointed out in the press conference, it’s a hedge against losses incurred from labor shortages (read: farmers don’t have to pay people anymore).

The average farmer in the US is over 55 years old, and John Deere notes that fewer and fewer people are choosing to enter the agriculture business, while demand continues to grow. As John Deere continues to push its autonomous vehicle programs, its dependence on bigger, more powerful electrical systems to power those systems will grow as well.

Indeed, the push toward automation is cited as one of the driving forces behind the industry’s appetite for electrification, too. As recently as 2020, Ford told Wired that “testing shows that more than 50% of a battery-electric vehicle’s range would be sucked up by the computing power demanded by self-driving software, plus the air conditioning and entertainment systems needed to keep passengers comfortable.” In a tractor? On a farm? Speed isn’t of the essence, torque is, and an electric tractor can not only keep working longer at its most efficient low rpm range, but it also has a relatively short distance to cover to get back to its “home” and charge or swap out its batteries. It’s not about miles at that point, it’s about hours – and that’s something John Deere’s latest acquisition knows a lot about.

This launch is a statement of intent from John Deere. They’re going autonomous now, and they’re doing it on the backs of advanced batteries that they’ve paid good money not to share. Expect good things if you spend the $500,000+ to order one.

In the meantime, you can watch the complete John Deere CES 2022 press conference for yourself, below, and let us know what you think of John Deere’s autonomous tractor in the comments.