Hopes of Dakar victory dashed for Audi RS Q e-tron, but it isn’t the electric drive that failed 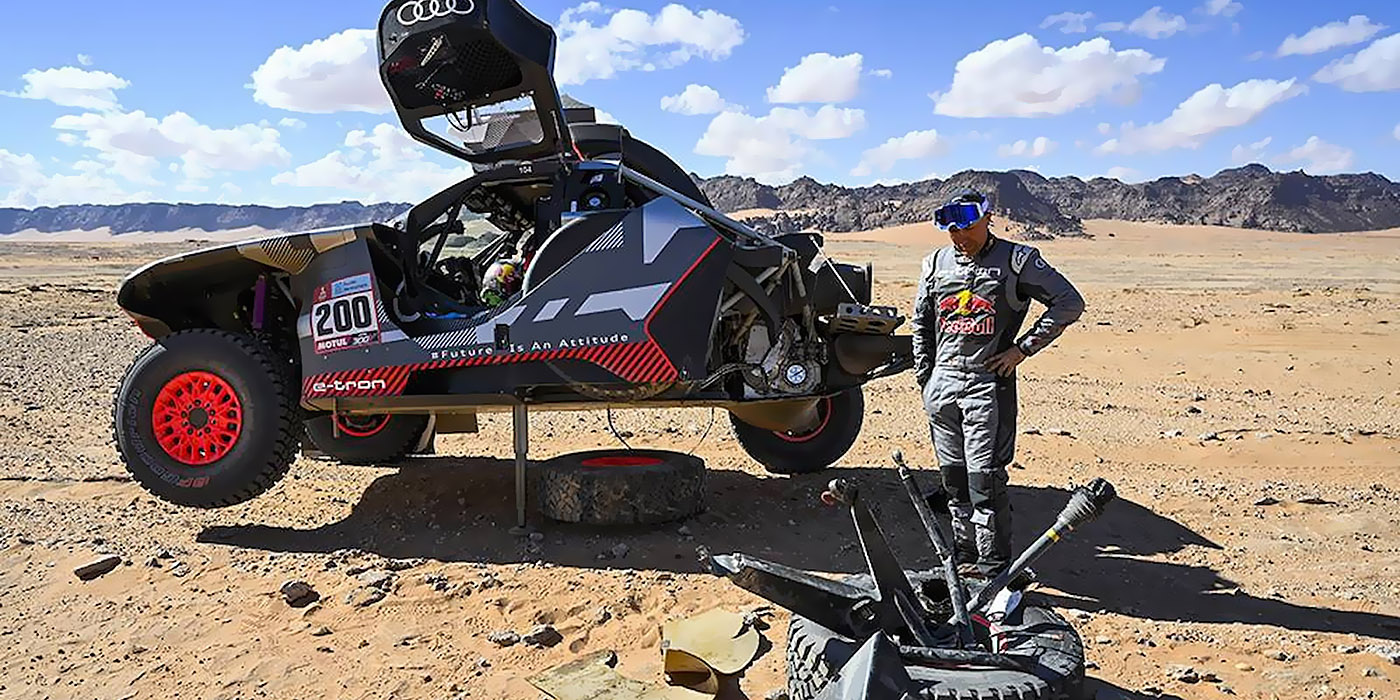 How did it all go so wrong for Audi?

To the uninitiated, it might seem like Audi had a real shot at victory at this year’s Dakar Rally. After all, Audi knows how to make extremely capable electric cars, not the least of which being the fast, powerful Audi e-tron GT that our own Seth Weintraub got to drive through the Adirondacks last year, and Audi’s marketers had hoped to leverage a strong showing at Dakar to sell even more e-trons (GTs, Q4s, and everything in between). To help ensure that strong showing, Audi spared no expense, hiring two big names in Peterhansel (the winningest driver in Dakar history), and Sainz (a multiple Dakar winner as well, and an absolute legend of motorsport).

Things were looking good for Audi. Then, Peterhansel hit a rock at an off angle, effectively shearing the left rear suspension off of his rally buggy and leaving him, and his co-pilot, Edouard Boulanger, stranded in the remote Saudi desert …

… while Sainz just got lost. Simple as that, in a full-on, Bugs Bunny, “I knew I should’ve taken that left turn at Albuquerque” type of moment.

The deck had been stacked against Audi

When Audi first announced its intent to race the Dakar Rally with a car propelled solely by electricity (there is a 2.0-liter gas engine on board, but it’s strictly a range-extender for use on the longest Dakar stages, and does not power the wheels), it did so under the belief that the regulations would be written in a way that ensured its RS Q e-tron would be competitive with the internal combustion engine (ICE) powered classes. From Audi’s point of view, that meant their cars would be allowed an on-board tire inflation system to help tune the car’s handling on the fly and a physically larger chassis to allow for more suspension travel and bigger wheels in a bid to spread out impact loads and more easily cover uneven terrain.

Audi didn’t get those accommodations, which the ICE classes did get, and the project was on its back foot from then on. “What we can’t ignore is that a regulation that was going to give priority to these hybrid-electric engines (didn’t come to pass),” Sainz told Motorsport.com, in the hours before the rally. “In the end we have the same or less power and more weight … We are going to see this very quickly and unfortunately it has penalized the project a lot.”

We did “see this very quickly”, and – to fans of Audi’s motorsport program and electric vehicles in general, it’s almost painful to see it play out exactly the way Sainz described.

And, before someone points out that the regulations didn’t make a huge difference because the RS Q e-tron was running second, remember that Audi had arguably the best Dakar Rally driver of all time behind the wheel, and he was pushing his machine to the absolute limit just to stay in touch with the leading Toyota (a Toyota/Gazoo Racing Hilux pickup powered by a 3.5-liter twin-turbocharged Lexus LS engine packing “over 450 hp”). That’s a testament to Peterhansel’s talent (IMO), not the ASO’s “fair and level” rulebooks.

In any event, there’s still hope of a top 10 finish from the third Audi, piloted by Mattias Ekström (who, it should be noted, also got lost, missing the waypoint in the first stage), but even more hope that the lessons learned today will lead to a more competitive electric off-roader in the future. As for whether or not Sainz and Peterhansel will re-sign with Audi, that’s unclear – but Sainz seems motivated as ever, despite his 59 years of age. “Every year I renew my dreams, that’s what gives you the motivation to keep going,” he says. “And when this project was put on the table, it was exciting enough to try to be part of it. And for me, as a veteran, the fact that Audi was counting on me made me very excited.”

“Maybe next year,” in other words. In the meantime, you can check out some great pictures of the Q RS e-tron, below. Enjoy!