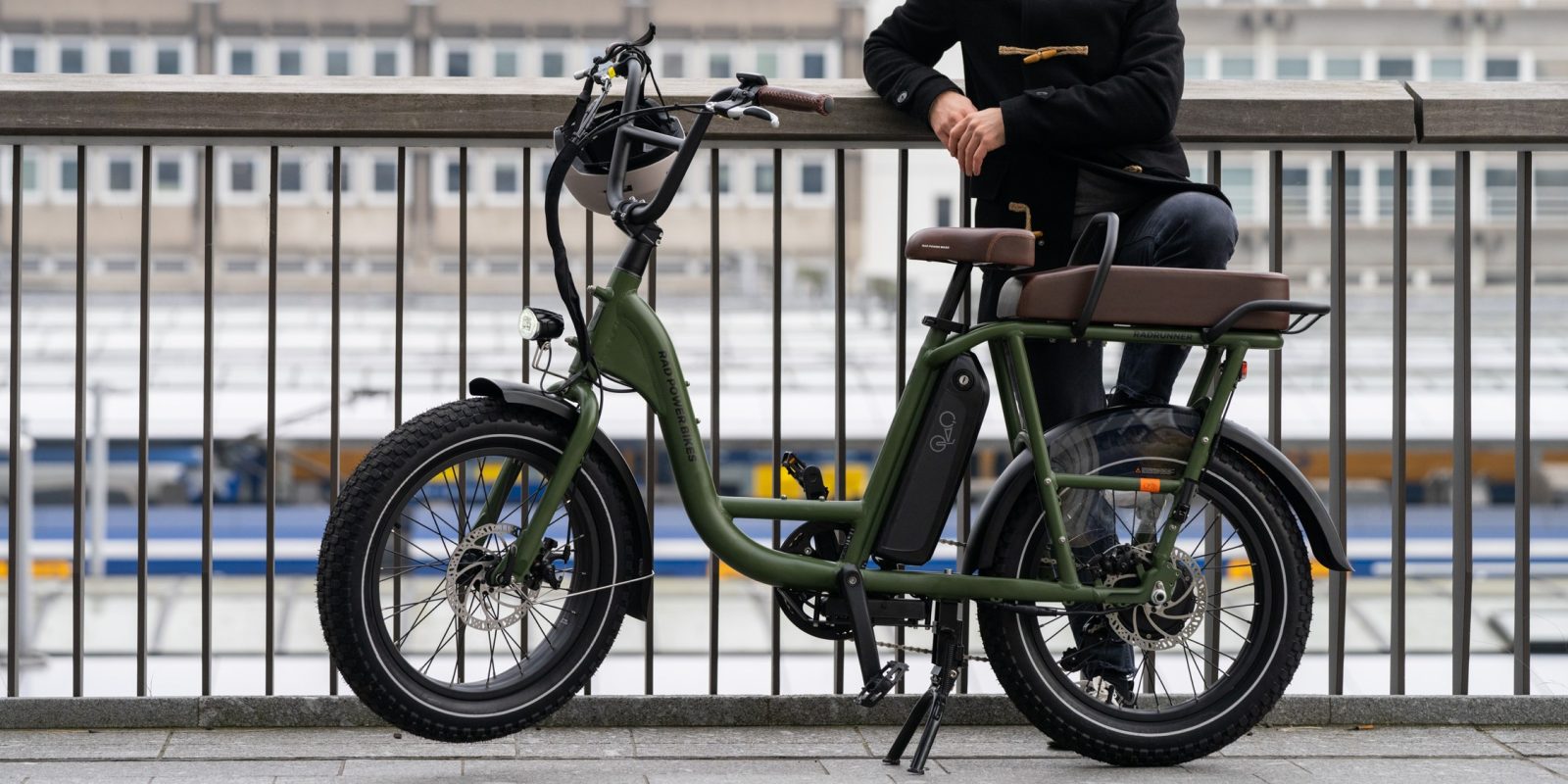 The RadRunner from Rad Power Bikes broke new ground upon its release two years ago. It became the first widely successful utility e-bike from a major manufacturer, spawning many imitators in the process. The e-bike has remained a staple of Rad’s lineup of electric bicycles ever since, and it is now getting an update in the form of the RadRunner 2.

The RadRunner 2, which was just announced this morning, carries over much of what riders know and love from the original RadRunner.

The step-through frame is largely the same, though the geometry has been altered to bring it closer to the popular RadRunner Plus. A more laidback head tube angle mimics a similar angle offered by the longer suspension fork on the RadRunner Plus.

While the RadRunner 2 doesn’t have the same suspension offered by the fancier Plus version, it does draw inspiration from its ride comfort. To create a more plush ride, the RadRunner 2’s saddle has been upgraded with an extra 15 mm of cushioning. That’s a whole half-inch of butt-bouncing goodness, making the somewhat funny-looking flat saddle a bit nicer on the tush.

The odd look to the saddle is no accident. It’s designed that way to fit nicely with the Passenger Kit accessory that turns the RadRunner 2 into a two-person e-bike. Or, as I found when I tested that package on the original RadRunner with my two young nephews, it can be a three-person e-bike as long as riders #2 and #3 are sufficiently pint-sized. And with the inclusion of a new accessory, Rad Passenger Bars, the RadRunner 2 will be even more comfortable for rear passengers.

The long rear bench seat combined with the wheel skirt and footpegs makes for an optimum passenger platform, but it can still be used for loading cargo as well. The combined utility of cargo and passengers was one of the first things that drew me to the bike over two years ago, and I’m glad to see that it has only gotten better. In fact, I’m guessing those passenger bars would make a great place to tie bungee cords when you’re lashing down cargo – not that they are likely intended for that. But you know the drill: improvise, adapt, overcome.

The RadRunner 2 platform still accepts other popular accessories from the RadRunner line, such as that giant Center Console accessory that provides enclosed storage, a phone holder, and a cup holder all in one package. It removes the step-through nature of the bike, but its utility likely makes it worth it for many riders.

The other major features of the RadRunner 2 all stick to the usual suspects we saw with the original RadRunner. There’s the single-speed drivetrain, the LED display, and the Tektro mechanical disc brakes.

All of these parts are chosen to offer a balance between good quality components and affordability. Riders looking for suspension or multiple gears can upgrade to the RadRunner Plus, but the RadRunner 2 is still likely sufficient for most riders.

The three-inch tires are also back, offering wide enough tread for off-road excursions, but remaining narrow enough to preserve a nimble ride on the road.

As for pricing, the RadRunner 2 goes on sale this morning for $1,499. That’s a solid increase compared to the $1,299 RadRunner, but likely falls in line with Rad’s recent announcement that prices would be increasing due to increasing pricing pressures in the e-bike industry.

As anyone who saw my review over two years ago when the first RadRunner came out will know, I’m a huge fan of this platform. It’s nimble, it’s quick, it’s simple, and it’s bulletproof. My biggest complaint is probably that the dang name always autocorrects to “roadrunner” when I type it.

While this is admittedly not a massive update to the RadRunner, that’s fine with me. In fact, I’d rather see it stay largely unaltered. The bike has long been an awesome addition to anyone’s garage, and the changes we’re seeing now simply make it a bit better without messing up a good thing.

That’s largely the sentiment I heard from Rad’s team when I asked them about the design changes. They explained that, for the most part, the RadRunner has been a crowd favorite, but that they wanted to take into consideration some specific feedback they heard about the ride to improve it even further with these updates.

The only thing that stings me here is the price. I still think the RadRunner 2 is a good buy at $1,499, but that previous pricing for the RadRunner 1 was pretty sweet. Like we’ve covered before though, everything from the exchange rate to the cost of raw materials and gouging ocean freight rates are forcing manufacturers to raise prices across the board.

What do you think of the RadRunner 2 platform? Let’s hear your thoughts in the comment section below!