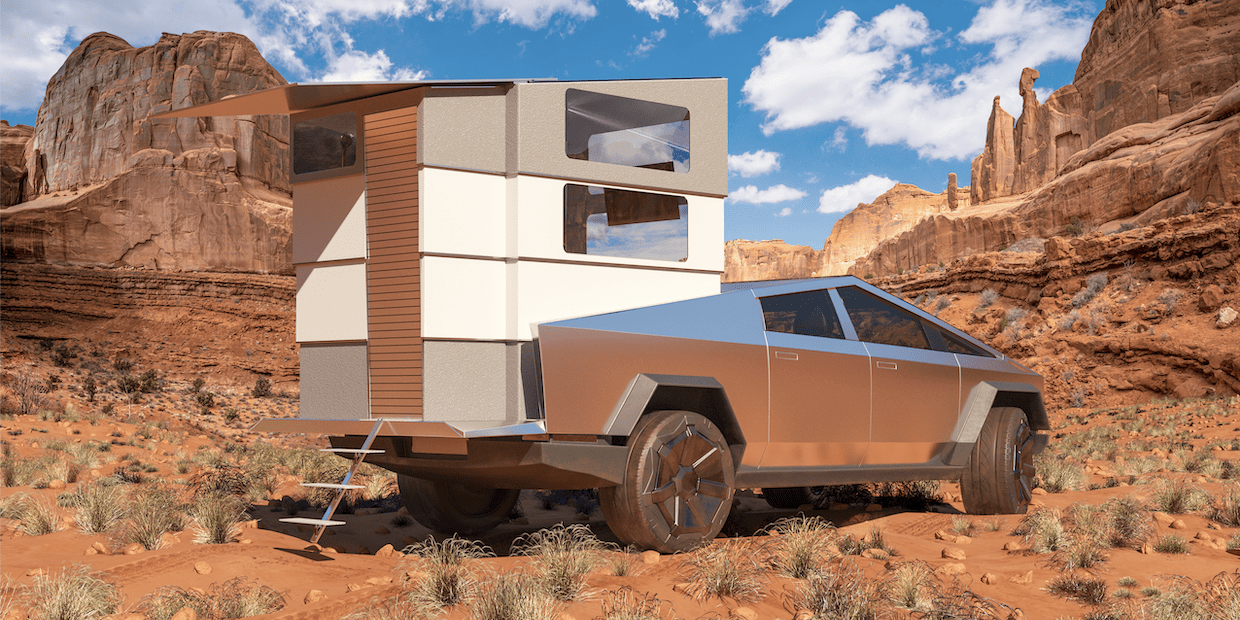 CyberLandr, a very ambitious high-tech camper designed for the Tesla Cybertruck, is raising money at an astronomical $400 million valuation.

Earlier this year, we reported that people had already started selling third-party Tesla Cybertruck accessories even though the truck is not on the market yet.

It started with this camper system for Cybertruck called Cyberlandr.

We noted that the project is quite ambitious, since it looks to cram a bathroom, bedroom, kitchen, and office in an automatically deployable camper out of the Cybertruck’s bed.

The idea is that instead of having a camper sit on top of the truck or in a trailer pulling behind it, the CyberLandr sits flush inside the Cybertruck’s bed, which is much more efficient and will have a much smaller impact on range.

The project quickly became popular and gathered a backlog of reservations worth $50 million in just a few weeks.

That’s not actual money in the bank, but projected future sales based on the reservations that they received, which require a $100 to $5,000 deposit.

This week, CyberLandr announced that the number increased to $100 million.

CyberLandr used the announcement to launch a crowdfunding campaign on StartEngine to raise up to $5 million.

Lance King, CEO of Stream It, the company behind CyberLandr, said about the campaign:

“We are humbled by the overwhelming response and excitement around CyberLandr. Many people have asked for the opportunity to invest in the early stages of the company. To make this possible, we have partnered with StartEngine to make a very limited number of shares available.”

While King calls this the “early stages of the company,” the valuation doesn’t reflect that.

People investing in the company are buying into a pre-money valuation of $400 million.

Some potential investors on StartEngine asked about this wild valuation and King tried to justify it in a comment:

“It is a matter of scale. Most products on StartEngine are much less expensive than CyberLandr, so it is difficult for them to achieve a similar valuation. Also, more capital is required to design and manufacture CyberLandr than other products on StartEngine. Current paid reservations represent sales in excess of $100 million, so a $400 million valuation is only a 4x multiple. As part of your due diligence you might consider 40% of truck owners have an RV. Take the number of Cybertruck reservations and multiply it by the percent of buyers you think will want a new RV with zero aerodynamic drag, multiply that by the suggested retail price to estimate future revenue. Then multiply that by whatever you consider to be a fair multiple for a fast growing company in a growing industry. The result may well uncover an excellent investment opportunity.”

Over 90 investors already committed $200,000 in the campaign that was launched yesterday.

I am a fan of the project. I participated in the reservation contest and ended up winning a free unit if it ever makes it to production. But I am being cautiously skeptical about that ever happening.

It’s a super ambitious project that is now being designed without access to a Cybertruck or even the final specs.

Those constraints are almost impossibly hard to overcome.

This is the only actual prototype that CyberLandr has shown so far and it’s only a fraction of everything the company is promising:

And again, the company doesn’t even know for sure if that will actually fit in the Cybertruck.

Everything else that CyberLandr shown is just CGI – but pretty cool CGI and certainly a great design.

But that brings me back to the valuation.

CyberLander is acting as if it’s actually a done deal that it can deliver this product and that the current reservation backlog perfectly represents sales.

The company is not accounting for the fact that it very well might not be able to deliver this product.

I am still a fan of the project, but I think asking investors to get in during the “early stages” with a $400 million valuation is ridiculous.