Tesla Cybertruck camper system receives $50 million in orders, and it doesn’t even exist yet 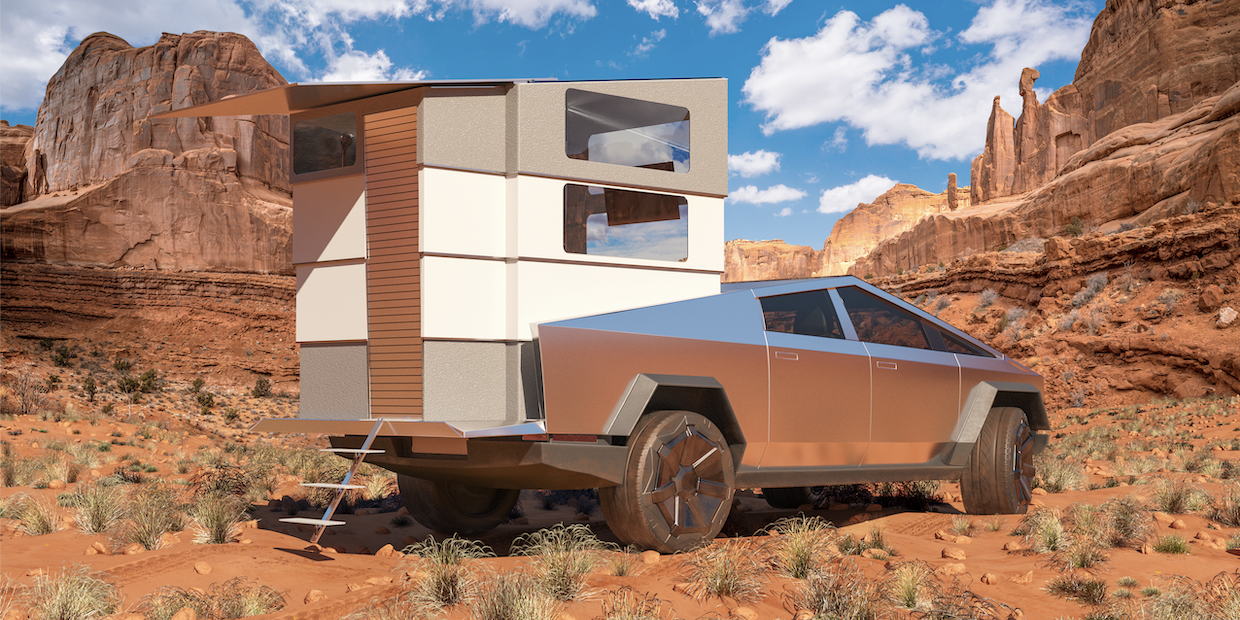 A third party camper that technically doesn't even exist yet
0

A third-party Tesla Cybertruck camper system has received over $50 million worth of orders even though the product doesn’t even exist yet.

It shows just how excited people are for the new electric pickup trucks and the kinds of adventures you can do with it.

Earlier this month, we reported that people already started selling third-party Tesla Cybertruck accessories even though the truck is not on the market yet.

It started with this camper system for Cybertruck called Cyberlandr.

We noted that the project is quite ambitious since it looks to cram a bathroom, bedroom, kitchen, and office  in an automatically deployable camper out of the Cybertruck’s bed.

The design looks interesting, but they are taking a lot of chances designing an entire product without actually having the Cybertruck in hand or even just the actual production dimensions of the electric pickup truck, which is not coming to market until at least late this year.

Nonetheless, they started taking pre-orders for the $50,000 camper, and there are a lot of takers.

The company announced having received enough pro-orders this week to surpass $50 million in sales:

“CyberLandr™ is an innovative camper/overlander for the Tesla Cybertruck that was unveiled April 6, 2021. CyberLandr™, by Stream It, Inc., transforms a Tesla Cybertruck into an adventure vehicle by providing a bedroom, living room, kitchen, bathroom, and office when deployed-while disappearing completely within the bed (or “vault”) of the Cybertruck when stowed. Preorders have continued at a rapid pace and already represents more than $50 million in future revenue.”

And they have more than just show-of-hand interest since they have actually been asking for significant down payments on the product from $100 to $5,000 to lock in certain discounts and have already sold out several tiers:

It means that they have also likely received millions in customer deposits.

Stream It cofounder Bill French says that he has never seen a product generate so much enthusiasm:

“We believe the enthusiasm is a direct result of people envisioning how this new adventure vehicle can improve their lives. People are telling us of many new uses for both wilderness and urban adventures. For example, parents at athletic matches, or the ability to boondock and overland to places previously inaccessible to a traditional RV. We estimate CyberLandr™ will be used 2-3 times more than traditional RVs because it is so easy to take with you.”

It also shows that Cybertruck reservations holders are excited about getting the electric pickup truck and are already thinking about how they are going to use them.

Tesla is believed to have close to 1 million reservations for the Cybertruck at this point.

Lance King, CEO of Stream It and lead designer of CyberLandr, said that the company will be working with Munro & Associates to bring the product to volume production:

“We conservatively estimate demand for CyberLandr™ at more than 10,000 units in 2022. This is why we are working with renowned lean manufacturing consultants Munro & Associates to help ensure high quality while we scale manufacturing to meet demand.”

Many analysts don’t even see Tesla delivering 10,000 Cybertrucks in 2022 due to the challenges it is expected to face in bringing the innovative electric vehicle to production.

The Tesla Cybertruck is going to use a new exoskeleton body and Tesla’s latest structural battery pack technology with its own 4680 battery cells.