Best and worst counties for EV charging in the US 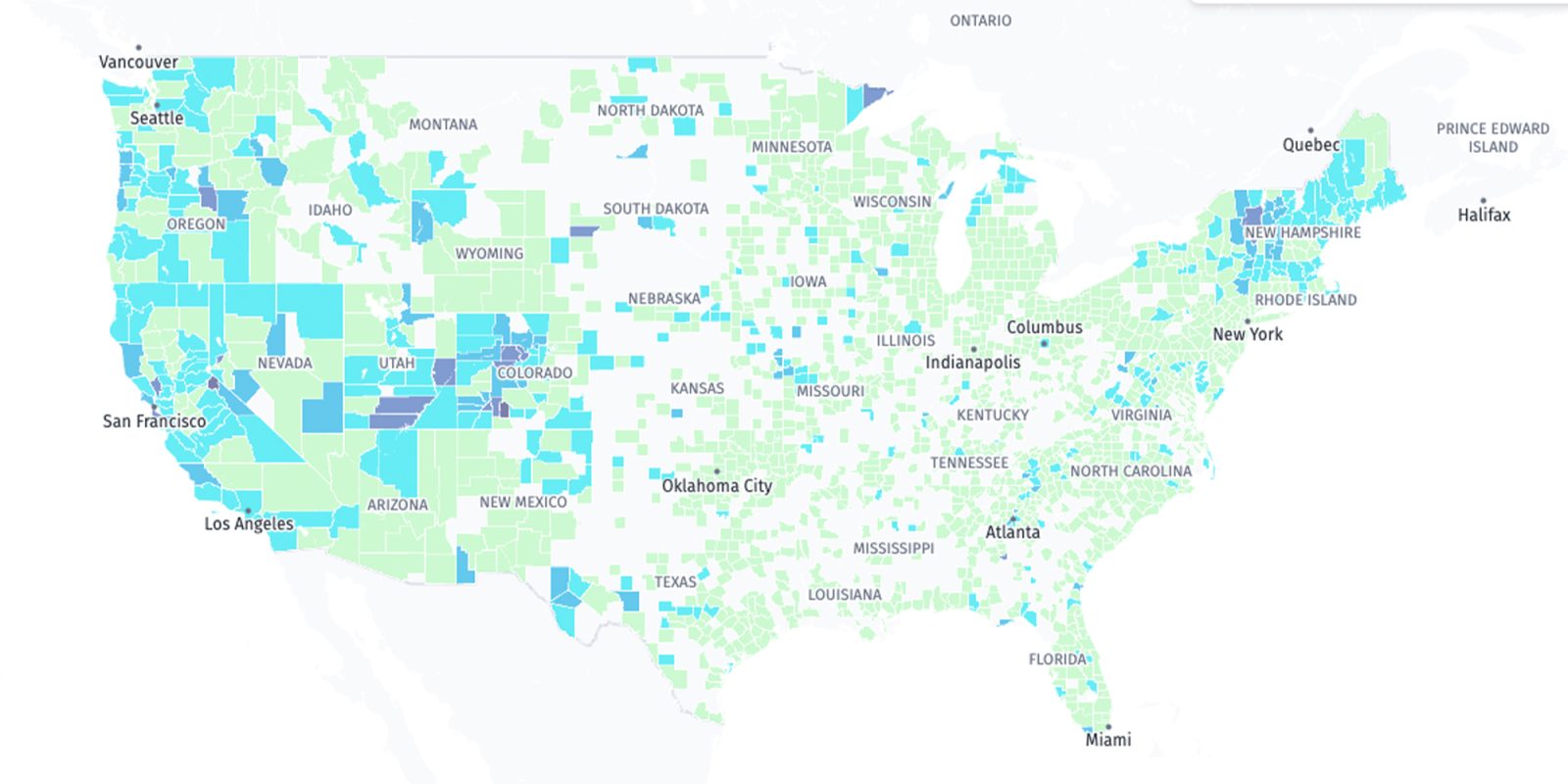 Previously, we’ve covered a number of different data studies about the best states to charge your EV1 and how far you can drive in each state on $100. Now, we’d like to get more granular than that and offer you an interactive map developed by HERE Technologies. Below you’ll find the best and worst US counties for EV charging. Scroll down to see how your county is doing so far.

The data used in the map and subsequent tables below was gathered and compiled by HERE Technologies, an international location data company and technology platform.

In addition to partnering with EV companies like Arrival, HERE Technologies has provided real-time data for Microsoft, AWS, and Lyft.

Below is the interactive map HERE has created. If it for some reason doesn’t load for you, try this link to access it instead.

We will start with the best counties for EV charging based on two data points, then segue into the worst… not-so-great counties. Let’s begin with the best-equipped counties per square mile.

Here are the current top ten best counties based on data from the map above. The Big Apple takes the crown as best in the US for its 540 EV charging stations on just 22.7 square miles of land. As you can see, that’s nearly triple the ratio of runner-up San Francisco County.

Lots of repeat winners on this list state-wise, including New York, California, and Virginia. Fun fact, Alexandria has been an independent city with no county affiliation since 1852. The City of Baltimore is similar in that it has been separate from Baltimore County since the adoption of the Maryland Constitution of 1851.

Those two cities along with the District of Columbia have been considered counties for the sake of comparison.

Number of charging stations per 100,000 people

In terms of EV chargers compared to county population, the data is slightly skewed, so take it with a grain of salt. Alpine County, California dominates the top spot… but with only seven charging stations.

Due to the fact that Alpine’s population is so tiny, its station ratio puts it ahead of somewhere like Pitkin County, which has 38 stations and over 15x more people. That being said, the ratio still means something.

If this post suddenly inspired 15,000 readers to up and move to Alpine County, it would theoretically need 105 chargers to support the population at its current rate.

Colorado is home to the most counties dense with EV charging stations, delivering four separate contenders on this list. No other state is on here more than once, let alone four times.

Again the numbers are a little skewed because of small populations, but consider the ratio.

You’ve seen the best, now let’s pivot to the note-so-equipped counties for EV charging. We will start with the counties with the smallest number of charging stations per 100,000 people, then dig into the numbers per square mile.

Congratulations Shelby, Alabama, you currently sit as the county with the smallest number of EV chargers for every 100,000 people within your county lines.

While the other nine counties on the list have the same number of total EV stations (one), Shelby has the highest population. Therefore, it takes the crown as the worst of the worst counties for EV charging.

What else is interesting about this list, is the geographical variety compared to the charts above. No state has more than one county on this list.

That being said, the southern US counties hold a majority, and the furthest western county only goes as far as Texas. Western and northwestern states have no presence in the bottom ten… at least in terms of population.

As for the worst counties for EV charging per square mile, we’re simply going to call it “everywhere else.”

In this sense, most of the US has some major charging infrastructure to improve upon as EV adoption continues to rise.

Any other comparisons you want to see? A European version perhaps? (we don’t want to leave you out).

Let us know in the comments or through email.