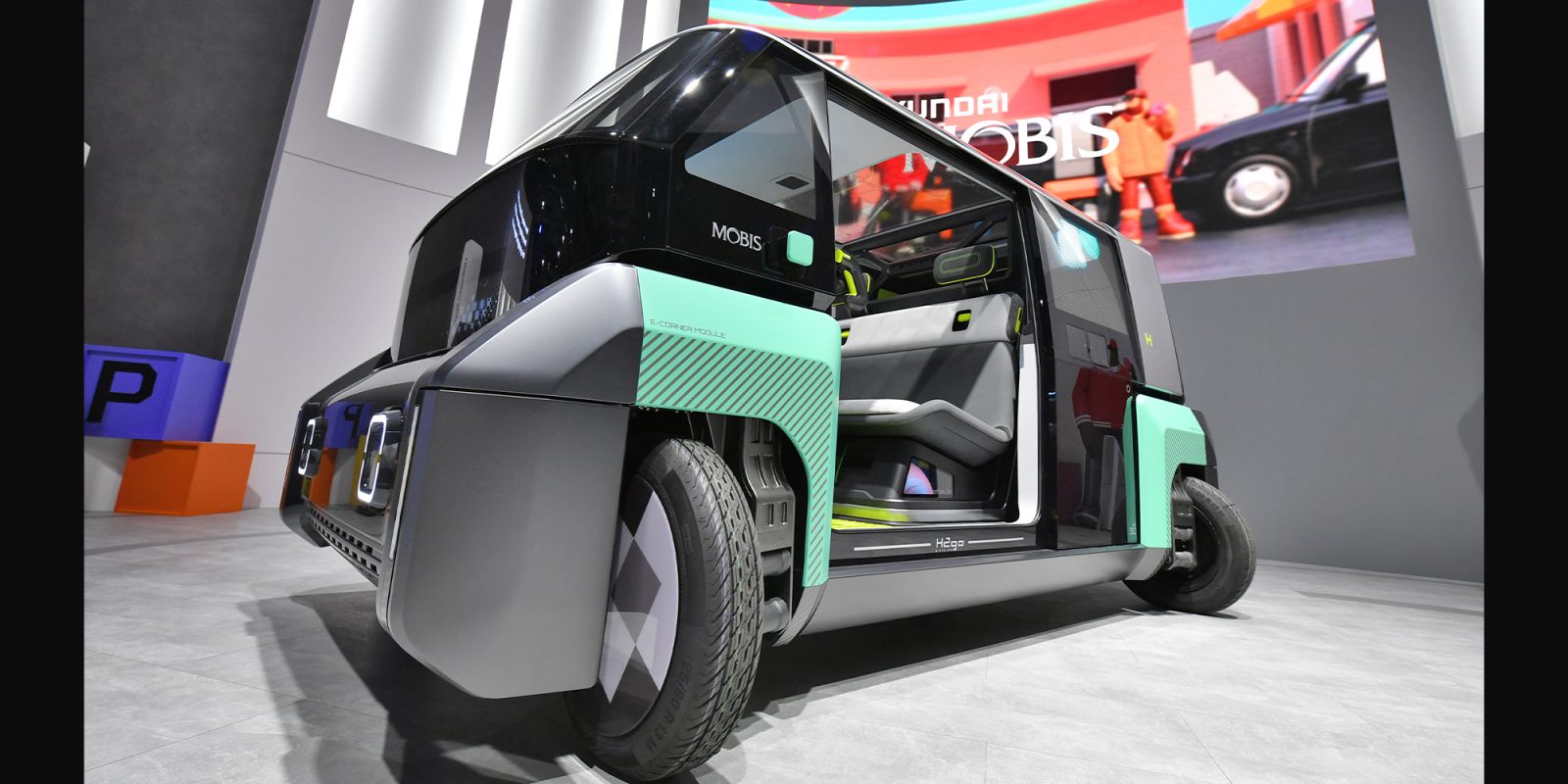 Parts and service arm Hyundai Mobis recently announced it has successfully developed its “e-corner module,” a design that combines steering, braking, suspension, and driving systems into each wheel. At a recent event, Hyundai Mobis demonstrated how each e-corner can turn a full 90º and drive sideways to support future Purpose Built Vehicles (PBVs) in congested urban areas.

The company has decades of expertise in sensors, software development for safety control, and develops various products for electrification in addition to brakes, chassis, suspension, and steering.

Hyundai Mobis first unveiled its e-corner module at CES 2018 as a concept, but the company has since revamped the design for practical use on the vehicles alongside an Electronic Control Unit (ECU) it developed to control the technology.

Three years later, Hyundai Mobis has reintroduced the e-corner module as a functioning core technology for the future of urban mobility.

In a press release from Hyundai Mobis, the Korean automotive supplier shared that it has successfully developed an e-corner module prototype that combines steering, braking, suspension, and driving systems into each wheel.

A unique feature of the e-corner module design is the lack of mechanical connection between parts, particularly the steering column. When integrated into an EV platform, for example, Hyundai Mobis will be able to more easily change its wheelbase, offering more space efficiency in the overall design.

Where traditional mechanical axis’ are limited to about a 30º wheel rotation, the e-corner offers a 90º rotation. As you can see in the video below, this allows for unique vehicle movements such as sideways “crab” driving and zero-turn rotations.

Hyundai Mobis stated that its e-corner modules are currently undergoing reliability verification and a feasibility study on mass production.

When the e-corners reach the production phase, Hyundai Mobis plans to integrate them into a specific modular platform for Purpose Built Vehicles (PBVs). These types of commercial and delivery vehicles could utilize Hyundai Mobis’ wheel technology to more easily navigate narrow urban streets and fit in and out of tight spaces.

After the skateboard platform delivers verified, real-world performance, Hyundai Mobis plans to add autonomous driving technology in order to deliver a PVB solution to customers in 2025. Check out the demonstration video of the Hyundai wheels in action below:

Hyundai Motor Group seems to be dabbling in a little bit of everything pertaining to future transportation, and it could very well prove fruitful to them down the road.

I can’t help but wonder what REE thinks of this news, as it has similar technology we’ve covered called the “REE corner,” not to be confused with Hyundai’s e-corner.

The thing is, REE already has its REE Corners integrated into platforms, and is expanding agreements with OEMs more and more each day. So in this sense, they’re a ways ahead of Hyundai Mobis.

That being said, Mobis only has to look across the table for EV suitors in Hyundai, Kia, and now Genesis, so that’s a huge party to be associated with right out of the gate.

Either way, we are seeing more wireless steering technology and wheel modules from EV automakers to save platform space for more batteries, modular capabilities, etc. Plus the crab movements don’t get old… at least not yet.

That’s the sort of efficient technology you can envision becoming commonplace on certain vehicles someday, especially those that make constant stops in congested areas… or for people who simply stink at parking.