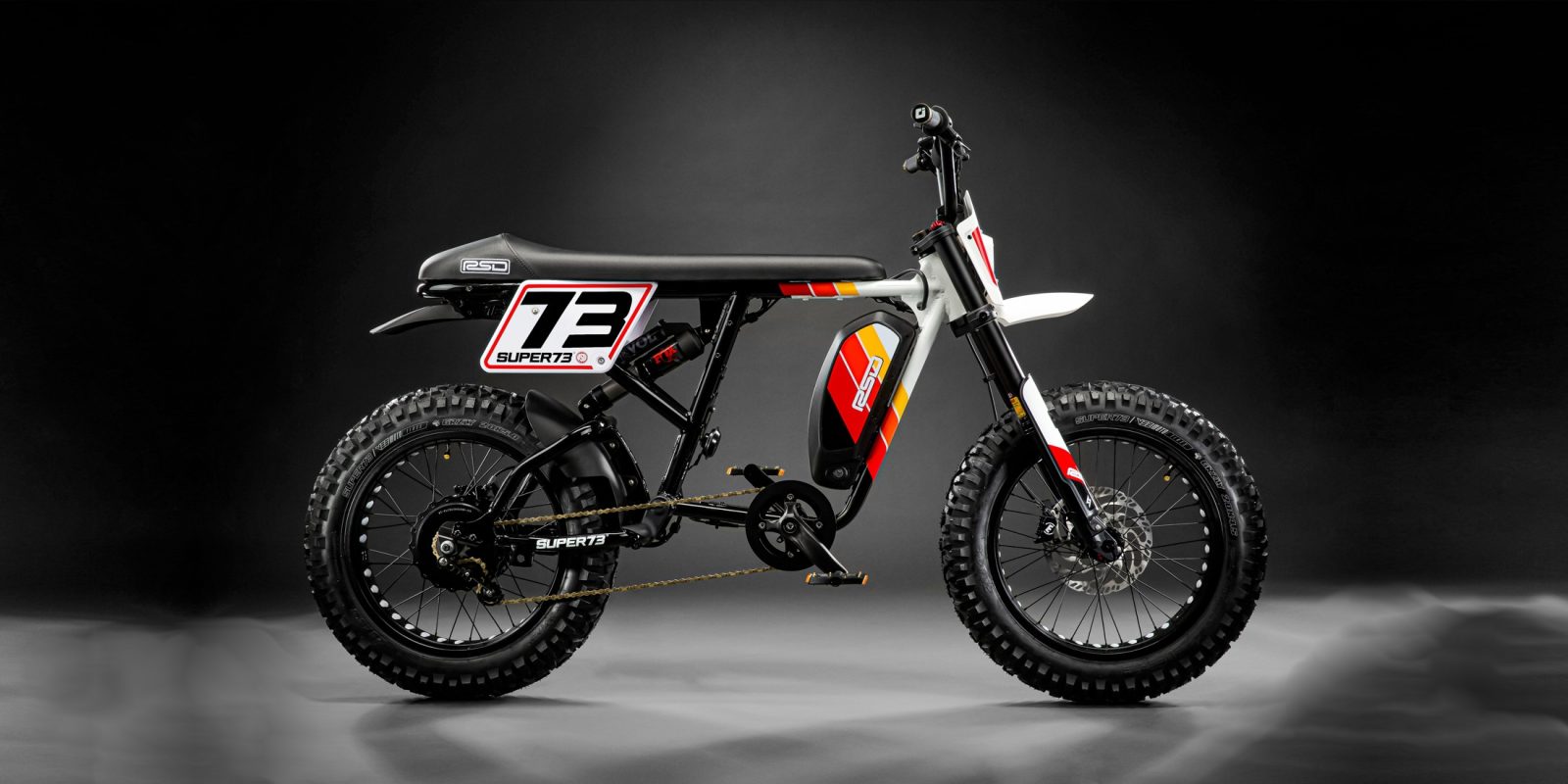 Super73 is known for collaborations that have seen its popular electric bikes take design cues from famous brands, sports teams, and other cultural icons. After showing off a beautiful concept bike last year designed under a collaboration with Roland Sands Design, the company has now decided to create a limited-edition production version of the eye-catching electric bike.

The original concept was pitched as an off-road racing-style e-bike, and the specs definitely live up to that name.

It was built on the base of Super73’s flagship RX-series e-bikes, which feature fully adjustable dual-suspension designs, high-power motors, and high-capacity batteries.

The stock 960 Wh battery has been relocated from the top tube to the down tube, making way for an extra long tracker bench seat in its place. The company says the new seat should give the rider extra range of motion while racing (or just cruising the streets).

The lowered battery will likely also improve handling in the turns by lowering the bike’s center of gravity.

The bike retains the stock RX’s 2,000W peak-rated hub motor, which offers speeds of over 28 mph (25 km/h) in unlocked mode. That mode is generally reserved for off-road riding. Riders can select from more limited modes to keep the bike street legal under various local regulations.

Class 1 mode limits the bike to 20 mph (32 km/h) with 750W of continuous power and 1,200W of peak power, but disengages the throttle. Class 2 mode (which is the default mode when shipped in the US) adds the throttle back into the mix and Class 3 mode bumps the speed to 28 mph (45 km/h) on pedal assist.

An upgraded Magura four-piston front brake caliper has been added, along with short brake levers to “increase precision” clamping down on that stock 203mm rotor.

The RSD x SUPER73-RX Malibu also gets an upgraded mid-bar handlebar with bar pad and ODI Ruffian ATV grips, which were added to the bar ends using gold lock rings engraved with “SUPER73.”

More gold accents can be found in gold pins on the Crank Brothers “Stamp 2” pedals as well as a gold KMC Z410 chain.

Adding to the visuals, the bike is decked out in RSD graphics that give it an even more eye-popping appearance than stock Super73s (which are anything but mundane looking to begin with).

“SUPER73 is proud to partner with Roland Sands Designs to take a fresh look at what two-wheel electric mobility should look like. With a focus on moto-style, ergonomics, and the attention to design that has made RSD so iconic in the motorcycle industry, the Malibu is a perfect fit for any rider’s lineup.”

The RSD x SUPER73-RX Malibu is a limited-edition e-bike with only 1,000 units to be produced worldwide.

As if the production wasn’t limiting enough, the price is likely to narrow down the potential market too: A cool $4,500.

Orders won’t open until October 25, so you’ve got some time to find the cash.

I know looks are subjective, but I think it’s awesome and I’d love to have one myself.

Regular Electrek readers may remember that we recently spent a few weeks riding Super73 e-bikes around Germany while visiting a few industry shows. The bikes were fast, powerful, and comfortable, making for great urban assault vehicles.

With all the upgrades and of course the new aesthetics from RSD, these limited-edition e-bikes are sure to be even more fun.

If you can afford them.

For those that still want the Super73 experience but don’t have a fat enough wallet, check out the brand’s more affordable models. I recently took a ride on the Super73-ZX that comes in at less than half of this price. You can see that ride video below.