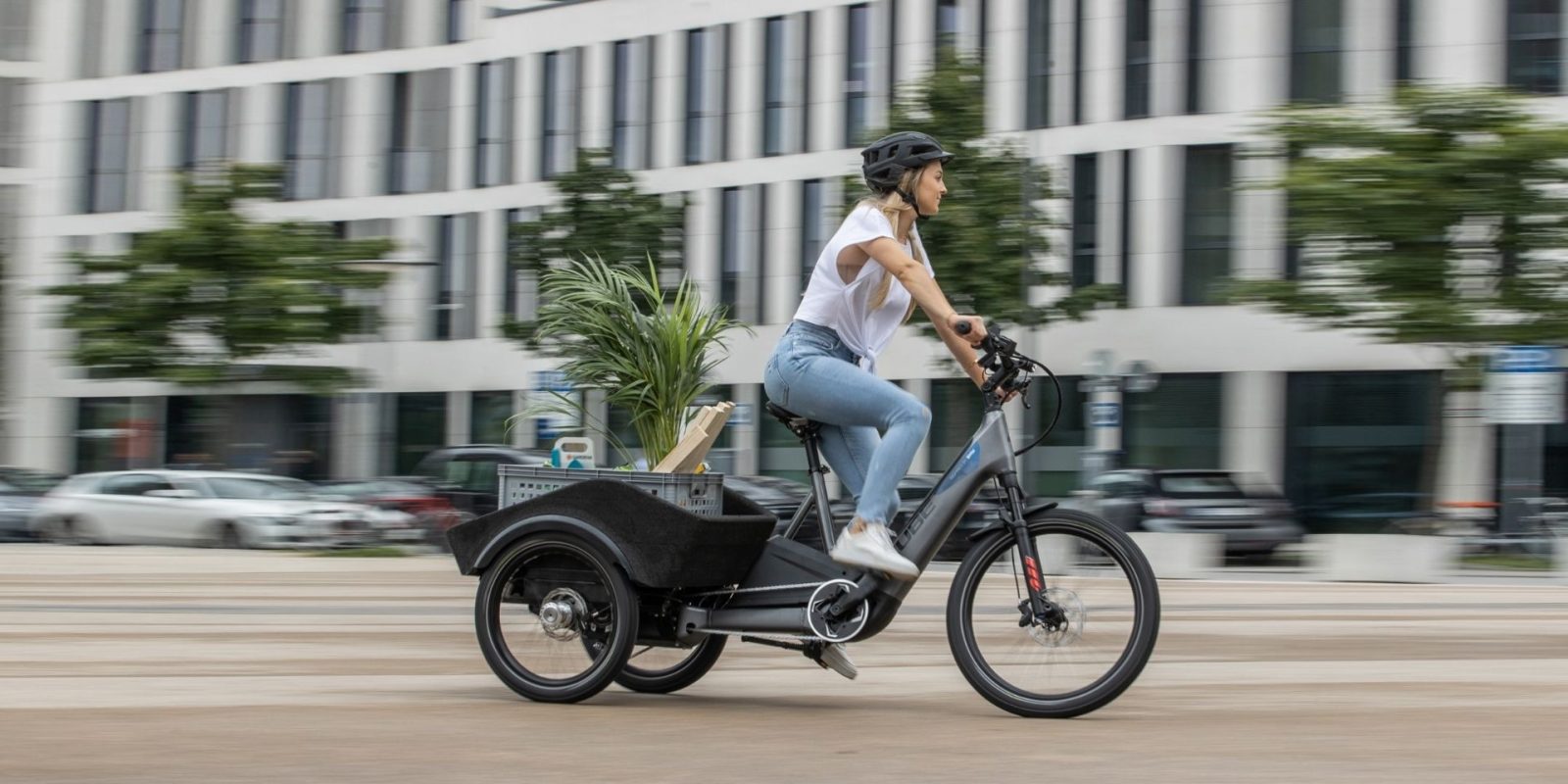 BMW said at the time that it had no plans to produce the design, but instead was seeking a partner to commercialize the concept. Fast forward several months and it appears BMW has found that partner in German bicycle company Cube.

Cube announced this month that they have licensed the design from BMW and the bike company is now showing off its version of the tilting electric cargo trike.

The cargo area was designed to accommodate different cargo attachments for carrying various items, from packages to children.

While most delta trikes (tricycles with the two wheels at the rear instead of the front) suffer from instability in turns, BMW designed the Dynamic Cargo to lean into turns. The frame pivots just forward of the rear wheels and cargo section, meaning the rider and front-wheel can lean into turns like a conventional bicycle.

Cube took that idea and ran with it, turning BMW’s renderings into a real life e-bike… errr, e-trike.

The titling design is key to the e-trike’s innovation and offers huge stability gains for the rider.

There’s a limit to just how fast a typical rigid delta tricycle can take a turn, or how sharply it can turn even at lower speeds. That’s a fact that is known to anyone who has ever taken a turn too fast on a typical tricycle and felt like they were going to be thrown off the side – or worse, felt that inside wheel lifting up.

BMW and Cube think that the Dynamic Cargo concept e-trike solves that issue for good, explaining:

“Innovative design allows the front of the Concept Dynamic Cargo to lean naturally through corners while the rear, cargo-carrying part remains upright. The result is a natural ride feel, easy handling, super stability and a smooth ride for whatever you’re carrying.”

The rear of the trike is also designed to accomodate a number of various utility-oriented tasks.

Grocery shopping is often one of the key considerations for cargo bikes, offering an alternative to a car trunk for trips to the local market. But kid carriers and other cargo requirements are equally important to many riders, and Cube shows off how the rear cargo bed can be converted for a variety of different cargo tasks.

Junior sitting in back may not get the benefit of the leaning mechanism, since the cargo remains firmly untiling, but at least the lower center of gravity of the rear cargo means it can corner at higher speeds than the upright-seated meat pilot upfront.

When can you get your hands on one of Cube’s tiling e-trikes? The answer is unclear.

Cube is still referring to the e-trike as a concept and hasn’t announced when it may see production. But the wording on Cube’s site says, “This is a concept bike whose serial production is not yet complete,” which sounds like they’re heading in that direction.

There’s also no word on pricing yet, but don’t expect it to be in the budget column. Neither BMW nor Cube are known for low-cost vehicles, so we don’t expect this new ride to be any different.