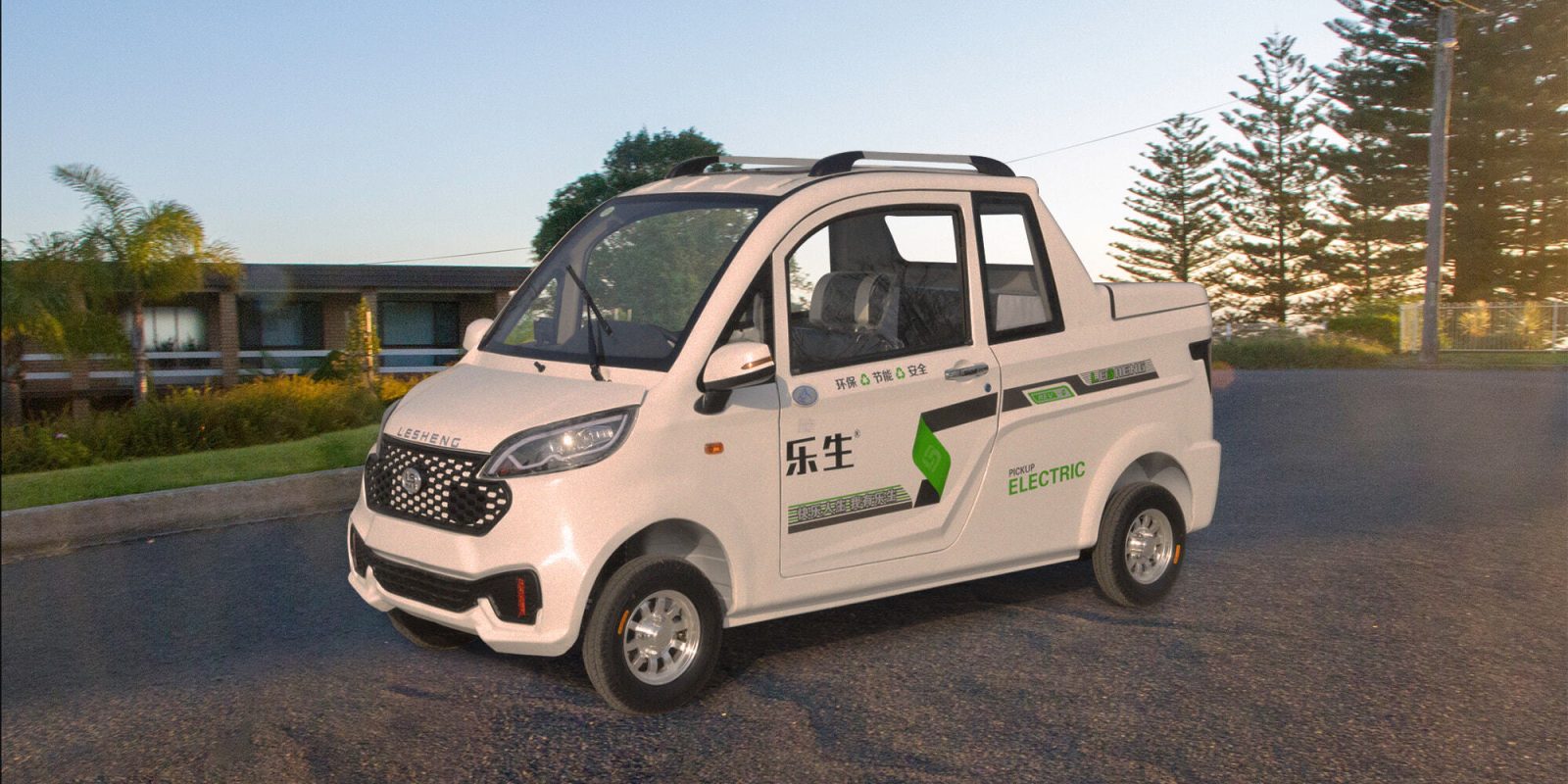 A lot of people know me for my electric bike passion. Whether it’s an electric bicycle, scooter, or motorcycle, I love throwing a leg on an electric steed and riding off into the sunset. And sure, I enjoy an occasional electric car ride as much as the next guy. But sometimes, and for some jobs, you simply need a truck. Nothing else will cut it. And that’s why there are many interesting new electric pickup trucks hitting the market.

And for those times that you just simply must have a truck, this Alibaba electric truck is absolutely not the one you’ll want to reach for. But it IS just weird enough to be featured as this week’s entry in the Awesomely Weird Alibaba Electric Vehicle of the Week series.

Let’s get the bottom line out the way first: I don’t think the Tesla Cybertruck or the Rivian R1T have anything to be worried about from my little Lesheng M1 here.

This odd little truck — or “trucklet,” as our resident graphics wizard referred to it — looks about as useful as a screen door on a submarine. At least for real truck-type work.

But that doesn’t mean the little Alibaba trucklet is without merit.

It certainly gets an A for effort, even if it gets a participation ribbon for execution.

Measuring in at a handy 3.06 meters long (10 ft, 1/2 in), the Lesheng M1 rolls on adorable 10-in wheels and is likely a dream to park. There’s no need for a backup camera when you can practically reach out the window and grab the rear bumper.

The base model is powered by a 2.2 kW motor, though you showoffs can upgrade to a boastful 3 kW if you feel the need to compensate for anything.

And sure, the little truck-thing may appear a bit puny, but it is brimming with confidence. Or at least its manufacturer sure is, as evidenced by the assurance that it can handle a 1,500 kg payload, “no problem.”

The ambitious little truck might help you get some love, though, as it actually sports an extended cab. Four seats mean you’ve got plenty of room to pick up chicks or dudes or whatever your style may be.

Come on, folks. Imagine how popular the kid would be that rolls up to high school in this thing.

You know what they say, “if this trucklet is a’rockin…. then you might want to get that checked out. I’m not sure it even has suspension.”

I must say, I do appreciate the emphasis that Lesheng puts on safety. These days if a vehicle doesn’t come with a decent safety rating, no one is going to buy it.

And so, Lesheng makes a valiant effort to put our concerns to rest.

The only problem is after reading the safety features, I’m almost more concerned now.

“The vehicle rolls over without a worry.” Yea, that’s what I’m worried about.

All jokes aside, though, their point about visibility is pretty good. The only way you’d have better visibility than this thing offers is if you were driving an aquarium.

And speaking of an aquarium, despite the Lesheng M1 truck likely saving you big bucks on your gas bill, you might be surprised to see how it could increase your water bill. I can’t find the text on this part, but the video below shows how the truck appears to need regular watering.

So while Lesheng seems to have scored some hits and some misses on the M1, the biggest selling feature has got to be the price. Instead of shelling out big bucks for an expensive Cybertruck or Rivian, the unassuming M1 here could be yours for the low, low price of just $3,100.

That’s even cheaper than the last electric pickup truck I almost talked myself into buying from Alibaba!

Should you buy this electric truck?

Hold up there a second, buddy.

While this series is all about having fun while exploring the weird corners of Alibaba’s electric vehicle empire, I’m not saying you should rush out and spend your paycheck on an (admittedly awesome) electric pickup truck like this.

Sure, it actually looks like it could be handy for the odd little work site job, but Alibaba can be a tangled mess of a place to do business.

I’ve personally purchased tons of stuff on the platform, but I always advise people to be careful. Communicate carefully and repeatedly with vendors to ensure you’re both on the same page. And be prepared for all sorts of surprise fees and unexpected costs as your order winds its way slowly around the world towards your doorstep (or more likely towards your closest port, where you could be responsible for handling it from there).

But if you do want to buy the world’s most awesomely weird electric pickup truck, don’t let me talk some sense into you. Instead, send me some pics, or it didn’t happen! And while you’re sending me stuff, feel free to drop me a tip if you happen to find your own awesomely weird Alibaba electric vehicle while perusing the site and battling insomnia; my contact info is in my author bio below. If your find is awesome enough — or weird enough — I may just feature it!

It could earn its deserving place in this series next to some weird one-wheeled electric motorcycles, electric Cinderella carriages, or a three-wheeled electric RV that might get you to the Grand Canyon but probably won’t get you back home.