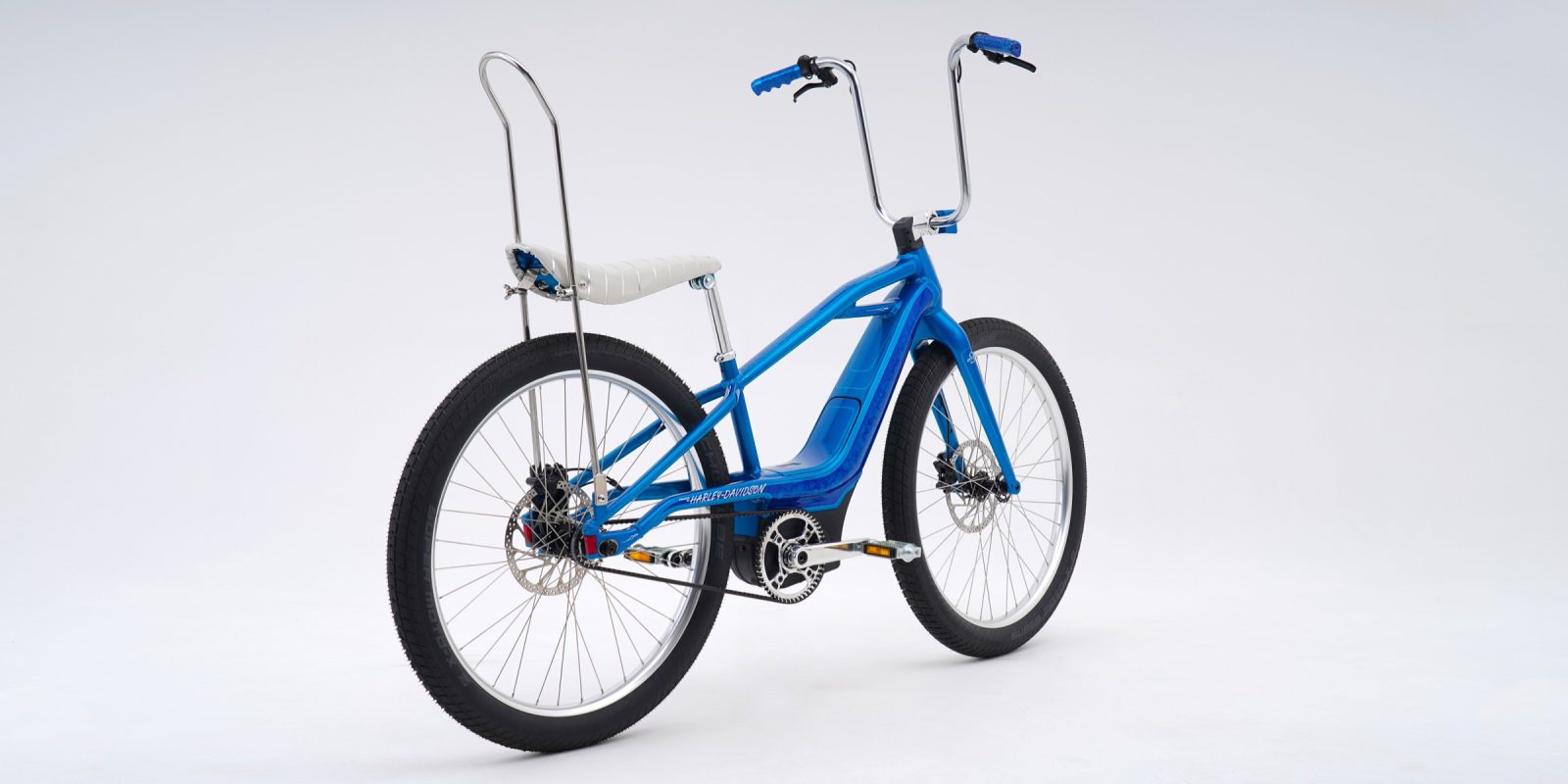 Harley-Davidson’s electric bicycle brand known as Serial 1 has several eye-catching e-bike designs that already draw on a bit of retro flair. But now the company has doubled down on the nostalgia with a custom chopper-style electric bike that resembles a classic Schwinn Stingray bicycle.

And it’s not the last custom e-bike design that Harley has planned for the future.

The new design is part of a series known as “1-OFF,” in which Serial 1 will produce one-of-a-kind electric bicycles to be auctioned off to the highest bidder.

These e-bikes are built on the same basic structure as the retail e-bikes offered by Serial 1, but come with significant modifications to the bikes’ aesthetics and accessories.

For example, the first bike in the new 1-OFF line is known as the MOSH/CHOPPER, and it has some seriously ’60s chopper bicycle vibes.

The beautiful, custom-modified electric bike was designed by Serial 1, though the modifications were performed by professional chopper builders Warren Heir Jr. and Kendall Lutchman at JR’s Fabrication and Welding in Milwaukee.

The MOSH/CHOPPER features a dazzling blue “Street Freak” paint job with silver microflakes reminiscent of the ’60s, as well as a hand pin-striping and hand lettering.

“Customization is such an important part of the motorcycle ownership experience. For decades, people have been modifying their motorcycles to reflect their unique style and taste. The 1-OFF Series applies this same spirit of individualization and personalization to e-bikes, showing people just how much fun it is to create an e-bike that suits their own unique personality.”

Under the hood (so to speak), the MOSH/CHOPPER retains much of the MOSH/CTY bike’s bones and features. The Brose mid-drive motor, Harley-Davidson in-house battery design, TRP hydraulic disc brakes and Gates carbon belt drive are all present.

Harley’s own light package is still there, including the bright headlight and frame-integrated tail lights.

But with all of the fun modifications, Serial 1 is expecting it to sell at auction for a pretty penny higher. That’s the plan anyways, though at time of publishing the high bid is only $6,100 with a little more than a day left.

For comparison, the MOSH/CTY is currently available for $3,799. It definitely can’t compete on style with the MOSH/CHOPPER though. Check out the custom bike wheelie-ing through Milwaukee in the short video below.

Serial 1 is planning to release several of these custom one-of-a-kind e-bikes per year, and I’ll certainly be interested to see what else they come up with. If the MOSH/CHOPPER is any indication, they’ll be pretty rad.

But at the same time, I have to wonder about this move.

I was the first journalist to ever see or test the Serial 1 electric bikes back before they were publicly released, and Serial 1 spent much of the time emphasizing to me how much they wanted to be seen as an e-bike brand, not a motorcycle company offshoot. While they certainly appreciated their heritage and the advantages that came with such a close relationship with their Harley-Davidson parents, they constantly compared themselves to e-bikes from other premium companies you’d see in any high-end bicycle shop.

So to go a very different direction and embrace a much more motorcycle mentality of custom bike builds would seem to me as a fairly large pivot.

Either way, I can’t deny how cool this bike looks. I’m definitely more of a “bikes belong on the road, not in a museum” guy, but I might have to make an exception for this one.

If you want to see what Harley-Davidson’s actual e-bikes look like, you can see my world’s first test ride video below.