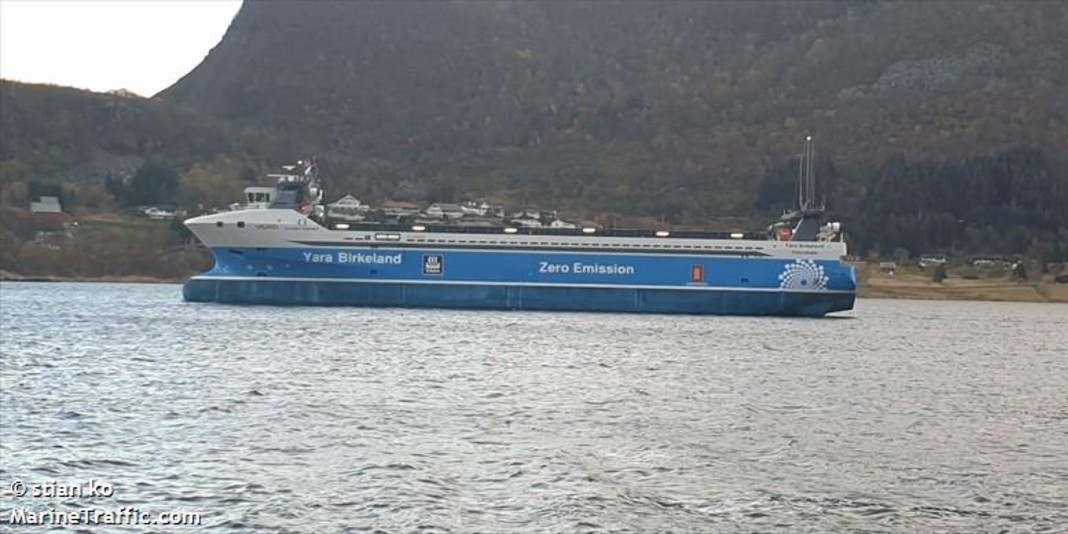 The Yara Birkeland, the world’s first net-zero, battery-powered autonomous container ship, was delivered to Norwegian fertilizer company Yara Norge AS in November 2020. It’s currently in the Norwegian port of Horten, where it’s undergoing further preparations for autonomous operation and a late 2021 launch.

The open-top Yara Birkeland was ordered by Yara in 2017, designed by Marin Teknikk, and fitted at Vard Brattvåg in Norway. Norway’s Kongsberg Maritime developed its technology. Leclanché SA of Switzerland supplied the batteries. The hull was built at the Vard Braila Shipyard in Romania. The ship’s development was paused in May 2020, citing autonomous logistics on land as a challenge. It completed its maiden voyage in December 2020, sailing nearly seven hours from Brevik to Horten, according to MarineTraffic’s website.

Kongsberg Maritime released a video about the Yara Birkeland in 2017, which gives a great overview. Kongsberg was a little ambitious at the time, as it stated in its YouTube summary that operation was planned to start in the latter half of 2018, but they’ll likely succeed this year.

Yara advised that, at this moment, their priority is for the Yara Birkeland to begin operating with zero-emission transport of containers. The new port construction inside the factory at Herøya is completed with only the delivery and commissioning of the port crane remaining. Once this is completed in the autumn, the plan is for the Yara Birkeland to start operations and to transport approximately 40-60% of Yara’s container volume by the end of this year. Work is also ongoing to prepare the Yara Birkeland for the first phase of sailing with reduced manning. Once that has been achieved, the ship will be developed to reach the desired level of unmanned operation during the next two years.

Yara provides the Birkeland’s specifications (and I’ve provided some explanations in italics for landlubbers):

Loading and discharging will be done automatically using electric cranes and equipment. The ship will not have ballast tanks, but will use the battery pack as permanent ballast.

The ship will also be equipped with an automatic mooring system – berthing and unberthing will be done without human intervention, and will not require special implementations dock-side.

To ensure safety, three centers with different operational profile are planned to handle all aspects of operation.

This is an exciting, groundbreaking project. Of course, the autonomy aspect is intriguing, but we are particularly excited about the emissions-free, fully electric aspect of this cargo ship.

The Yara Birkeland will reduce diesel-powered truck transport by around 40,000 journeys per year. And as Electrek reported in October 2020, shipping emits over 1 billion tonnes a year of CO2 and is growing — more than all but the top five country emitters. 90% of the world’s goods are moved by sea. Shipping generates between 2% and 3% of emissions.

The International Maritime Organization’s (IMO) greenhouse gas strategy is to reduce emissions by at least 50% by 2050 compared to 2008 and “a pathway of CO2 emissions reduction consistent with the Paris Agreement temperature goals.”

This strategy absolutely must be strengthened considerably as the IMO works toward adopting a revised strategy in 2023. If the Yara Birkeland sails successfully, building a lot more like her will help the shipping industry achieve a more ambitious emissions reduction goal.