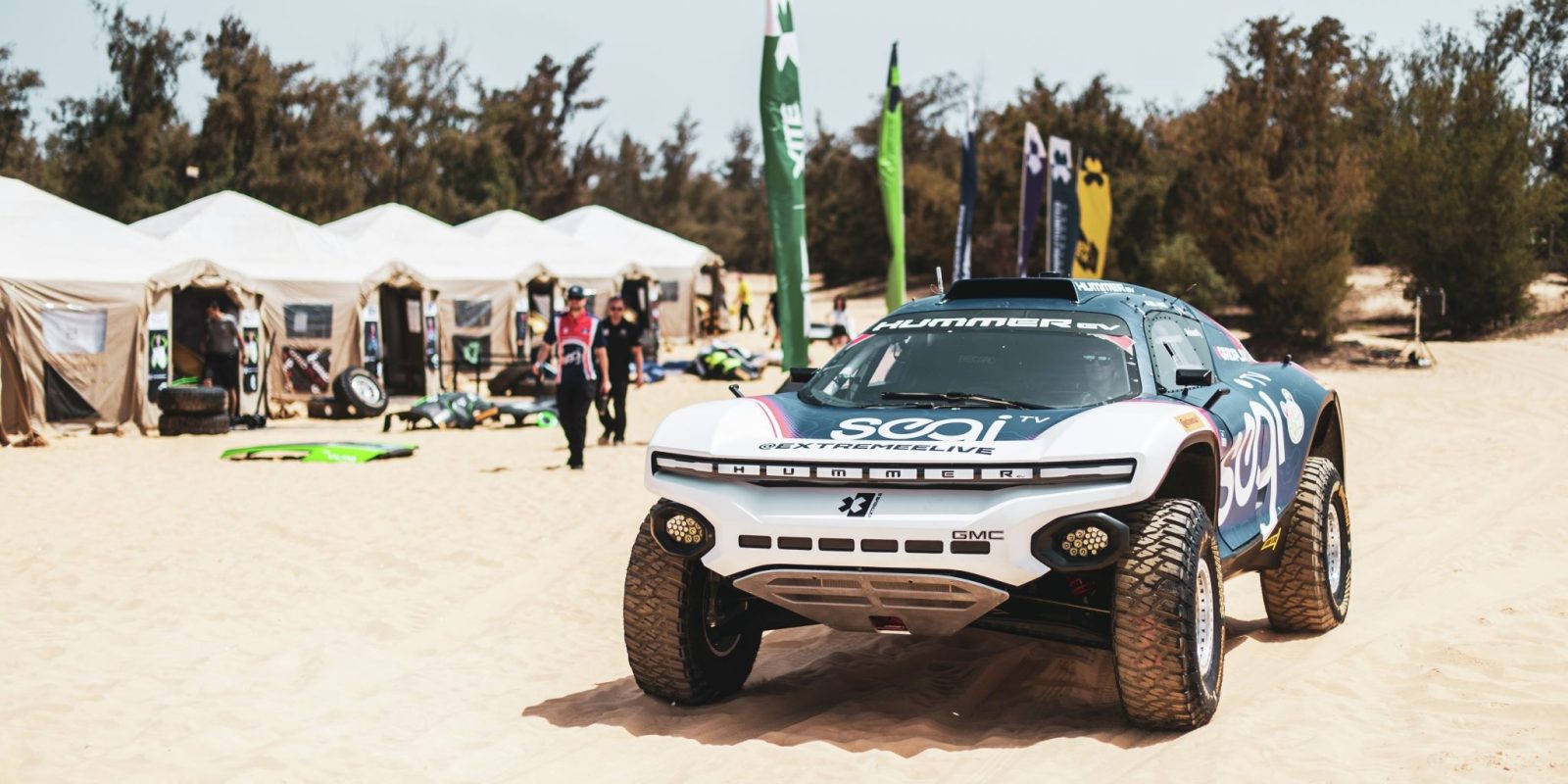 Extreme E, the electric off-road racing series, is back this weekend with their second race, this time on the beach at Lac Rose/Lake Retba outside Dakar, Senegal.

Each Extreme E venue is picked to bring awareness to one aspect of environmental damage humans are doing to the Earth. In the case of the Ocean X Prix, the focus is on “rising sea levels, marine ecosystem degradation and desertification – worsened by overfishing, inadequate waste management, and climate change.”

As is the case for most beaches, Senegal struggles with plastic pollution from washed-up single use plastics that tend to find their way into the ocean. Extreme E’s website for the Lac Rose, Senegal race location highlights some more of these issues.

The first race, the Desert X Prix, focusing on desertification and drought due to climate change, was last month in Saudi Arabia. It was quite a wild weekend and the cars looked fantastic ripping across the sand.

The race format left a little to be desired, though. Due to the fine sand the cars were racing on, visibility for trailing cars was reduced tremendously. The drivers who weren’t in the lead during the racing rounds had to lay off because they simply couldn’t see the track, which meant that each race was decided quite early. There was a little bit of wheel-to-wheel action and jockeying for position, but this only lasted a couple corners before the trailing drivers had to back off.

The Rosberg X Racing team of Swedish rallycross driver Johan Kristofferson and Australian rally driver Molly Taylor ended up with the win due to Kristofferson’s excellent pass in the early stages of the final race and the team’s strong qualifying effort.

There are a lot more videos and highlights from the last race on Extreme E’s YouTube channel (including Catie Munnings’ lap with a flat tire, which was a pretty incredible feat, and Claudia Hurtgen’s crash in qualifying, which she walked away from).

This weekend, with another sandy venue, we may see more of the same visibility problem. But Senegal should offer more coarse ocean sand than Saudi Arabia, which hopefully will reduce the amount of dust the cars kick up.

The circuit runs along the Atlantic Ocean beach for a long start/finish straight, then turns in to hop around on ocean dunes. There’s less elevation change than in the Saudi desert, but the short, sharp dunes will offer a bumpier track – we wouldn’t be surprised to see some airborne vehicles over the course of the weekend.

There have been a few changes made to the race format after the first round, and now there will be a four-car final race and additional points awarded for the fastest team through a particular sector (the “super sector”) of the final race lap.

As with every race, Extreme E is partnering with a local NGO for their “legacy program,” wanting to leave a legacy of environmental protection after the race. This time, the NGO is Oceanium and the program will plant a million mangrove trees in Senegal across five areas totaling 60 hectares in size.

The series also announced a new site, “FANWORLD,” which aims to connect fans with teams and drivers. So far, it offers fans access to live feeds of on-board cameras during the race, a virtual autograph session, and a chance to ask a question during the driver Q&A press conference.

Tune in this weekend to watch some awesomely fast electric cars bounce around on the beach.

The final race broadcasts on Sunday at 2 p.m.–4 p.m. UTC (7 a.m. PDT, 10 a.m. EDT) and will be streamed to some but not all territories. You can find out how to watch it on Extreme E’s website. In the US, Fox Sports 2 will carry qualifying and Fox Sports 1 will carry the final race, both delayed (check the listings for when sessions will air). The pre-weekend shakedown session was streamed on Extreme E’s social media and can be watched here.