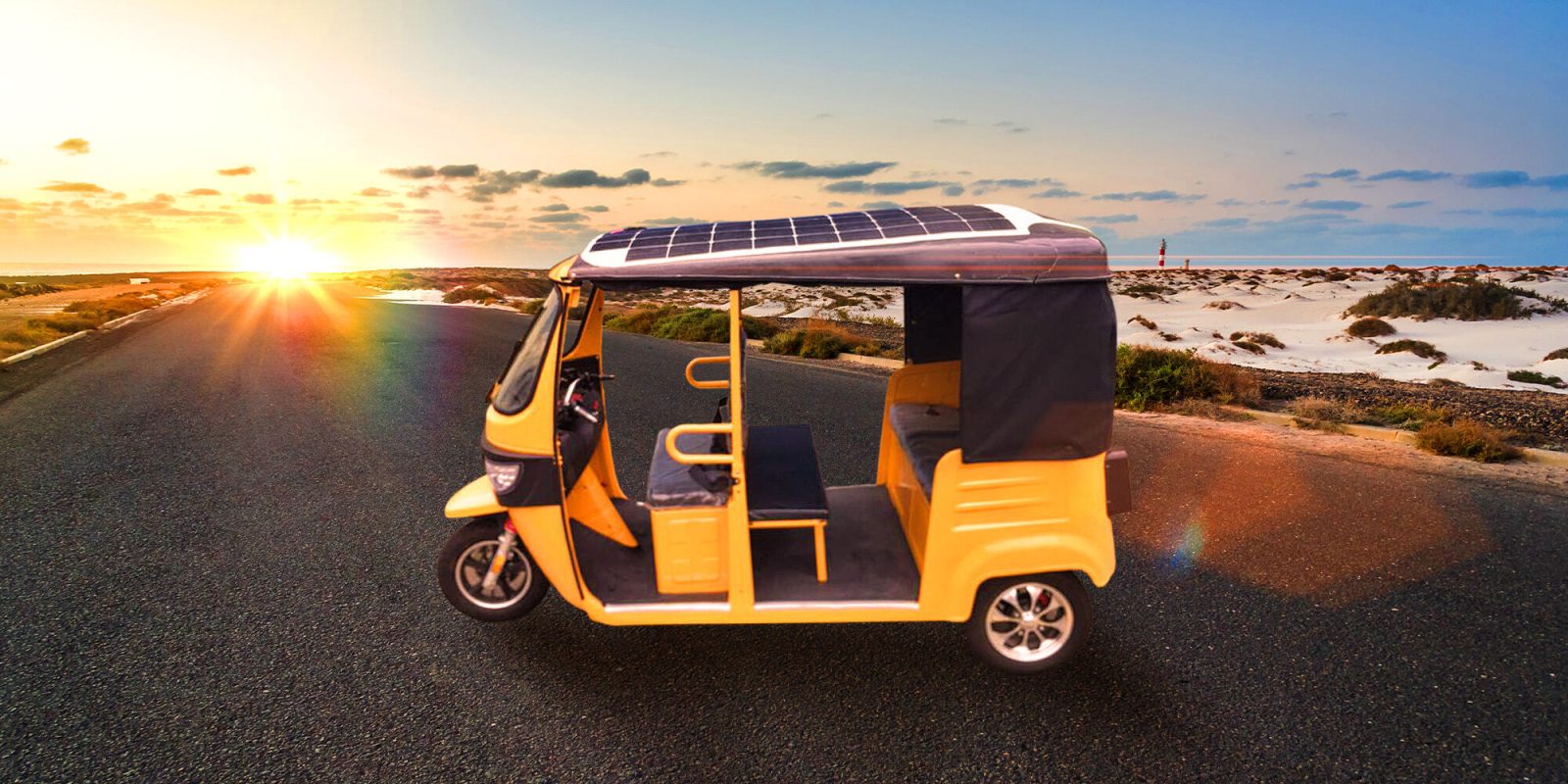 I think anyone who has ever suffered through a traffic-infused commute can agree that there are just too many cars out there. And while it’d be great to take a pile of cars off the road in one fell swoop, that’s easier said than done. But what if instead of taking cars off the road, we could take a pile of wheels off the road instead? That’s exactly what could happen if we all make the logical choice to ditch our four-wheeled cars and switch to this cheap little three-wheeled solar-powered electric tuk-tuk I’ve found!

And it’s so awesome (and kind of weird) that it has won itself the distinct honor of being named the Awesomely Weird Alibaba Electric Vehicle of the Week. Join me while we take a deep dive into this unassuming little three-wheeler that’s ripe to steal the hearts and minds of commuters everywhere.

The last time I checked out a cheap solar-powered Alibaba electric car, it was a (somewhat) traditional four-wheeled family car.

That’s nice and all, but it’s got a few problems. The car came with just too many wheels, windows, seatbelts, CD players, and other nonessential gear. How are you supposed to have a conversation with the guy driving next to you with all of that glass and metal in the way? Riddle me that.

This awesome little electric tuk-tuk, also known as an auto rickshaw in many parts of the world, seems perfectly tuned to solve all of our conventional commuting woes.

Tired of your high-stress job in the city? Slow down a little! Seriously. Like, slow down to 30 mph (51 km/h), the top speed of this little runabout. Your commute will take longer but imagine seeing the smiles on everyone’s faces as you whirr past on your way to work. It’s hard to have a bad day when you’re surrounded by smiling people!

It’s even available in five fun colors, which the vendor has helpfully labeled for us.

Need to take the kids to school on your way in? Perfect! There are four seats in the back, or perhaps six if the kids are small.

Plus the rear benches face each other. That’s a great safety feature since one group of kids will cushion the other in either a front or rear impact.

It’s also useful for when you stop short, since this high-end commuter comes with powerful hydraulic disc brakes.

I’m kidding, of course. I’m not a monster. The kids will be fine in an impact. There are grab handles.

Got range anxiety about driving an electric vehicle? This little bumblebee has you covered with its own roof-mounted solar power!

Those 300 watts of free energy should ease your worried mind as you roll along generating your own organic, free-range electricity. The battery is only a 60V 45Ah unit, so a full day of sun should net you a nearly complete charge of the 2.7 kWh pack.

If you don’t need the solar panel, though, and want to keep paying The Man for your electricity, there’s a standard-roofed model as well.

Again, the vendor has our back with a helpful diagram so we can tell them apart.

Worried about riding in the rain? Don’t be! There’s a windshield wiper!

You know, because that’s the biggest concern for a vehicle like this in the rain: that the windshield will get wet.

To be fair, rain covers for these vehicles do exist, adding flexible doors to keep the water out.

For some reason our tuk-tuk here doesn’t come with one, but I found a gas-powered version below that includes the rain cover in the price. Because that sounds like a great idea, hot-boxin’ carbon monoxide from an overcooked engine in this three-wheeled party bus.

Alright, so you’re obviously sold on the idea by now. We should all switch from cars to these things. They’re more fun, more environmentally sound, encourage socializing with your fellow commuters, and build kids with stronger bones.

By now the only thought that you’re undoubtedly left with is, “How much for one of these glorious chariots?”

Well that’s an excellent question, dear reader. In fact I’m glad you asked. Because if you act fast, I can put you in one of these Alibaba specials for the low, low price of just $1,691. Or maybe I can’t, but the vendor Guangzhou City Panyu Dengfeng Motorcycle Spare Parts Factory sure can. Known on the street as Kavaki Motor, they’ve got the hookup.

And I’m sure a sly shopper like you is already doing the math, wondering if you can get a bulk discount on what is obviously going to be the hottest car on the road next season. Fortunately for you, Kavaki has the hookup for you again. They’ll knock the price down to $1,500 for a volume order. How large is a “volume order?” Just a mere 1,000 units, that’s all.

Though I’ve got one more small bit of bad news here. That $1,691 price for a single solar electric tuk-tuk is without shipping – you’re responsible for solving that slight logistical hangup.

But fear not, for I’ve found you an alternative! Over on AliExpress you can spend a bit more (to the tune of $3,010) for the CFR price. That means the vendor handles everything, and you get the joy of free shipping that e-commerce has tricked us all into thinking is actually free.

But before you pull out your wallet, just note that the AliExpress vendor has a positive feedback score of 60%, which may just be the lowest score I’ve ever seen on the site. Then again, that’s what… a D-? That’s a passing grade, barely.

As much fun as I think one of these solar-powered electric tuk-tuks would be, I may just sit this one out. And I probably won’t actually recommend that any of you take a gamble on one of these yourselves.

Instead, I’ll just keep window shopping on Alibaba in search of the next Awesomely Weird Alibaba Electric Vehicle of the Week. And if you happen to find your own cool find, feel free to send me a link (my contact info is in my author bio below). I may just feature it in the series!

Before you go, feel free to check out some of the other fun and weird EVs I’ve featured in past weeks. If you enjoyed this tuk-tuk, you might like to see an electric RV built on a similar platform. Or if you prefer to get your wild ride on, an electric dune buggy may be more up your alley. To take things a bit slower, this cool two-seater electric Jeep will have you mini-rock crawling in no time.