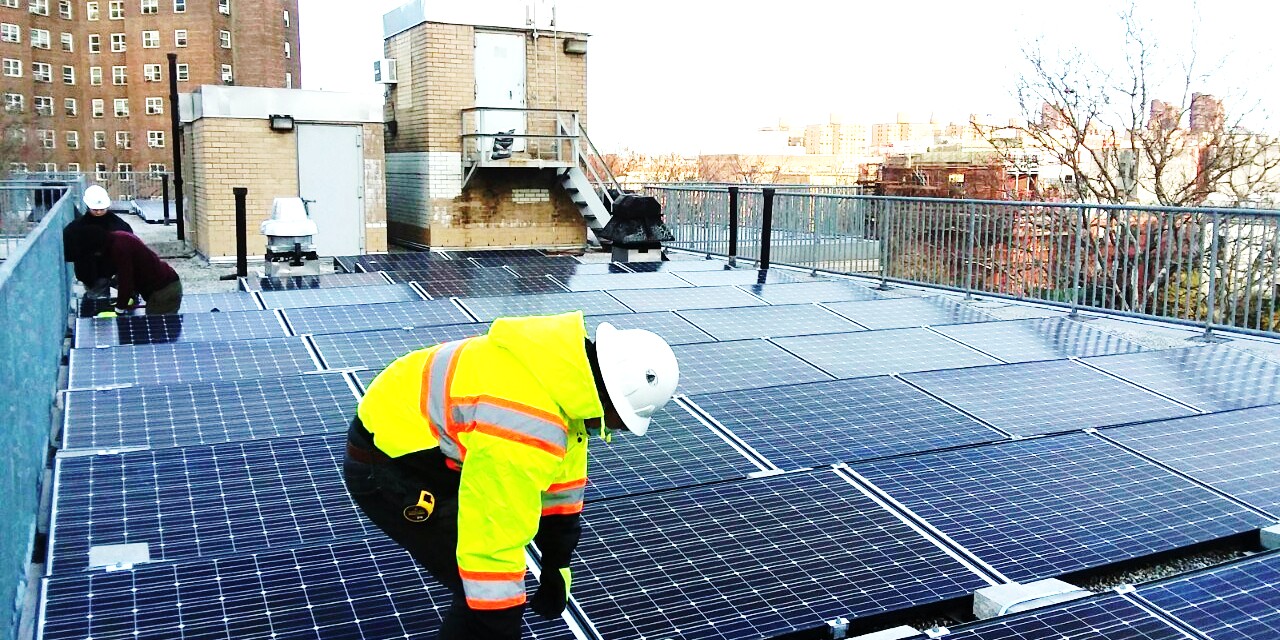 It’s a new program, so there are currently just 12 newly trained solar installers working at Glenwood Houses, a development in Flatlands, Brooklyn. From there, they’ll move to Kingsborough Houses in Brooklyn’s Crown Heights. They already completed solar installation at Carver Houses in Manhattan. Lease revenue from use of the roof space will go to the three NYCHA developments.

The three solar arrays will be capable of generating about 1 megawatt of electricity. Around 400 low- and moderate-income Con Edison customers will save about $120 a year each on their electric bills. Customers will pay a subscription fee, but they will always save because the subscription fee will be 20% less than the full dollar value of the solar energy credits they receive.

This project gives meaning to the saying, “It takes a village.” Solar One is providing training and education; WE ACT for Environmental Justice and the Brooklyn Movement Center recruit and screen prospective affordable housing subscribers; and WE ACT, Green City Force, and NYCHA recruit for the solar technician roles. The solar technician apprentices work for Queens-based Accord Power. The project is financed by clean energy investment company Sunwealth. The New York City Community Energy Co-op will manage customer subscriptions.

Juan Parra, director of community solar for Solar One, said:

Community Power shows how public, utility, and community partnerships can develop successful renewable energy projects that provide good jobs and utility bill savings to those who need it most. This model can be replicated with other public rooftops in New York City and beyond.

The city of Los Angeles commissioned a study from the National Renewable Energy Laboratory last year called “LA100: The Los Angeles 100% Renewable Energy Study.” That study, which was conducted by nearly 100 people and the “Eagle” supercomputer, was released yesterday, and it concluded that the city is able to achieve 98% clean energy within the next 10 years and 100% clean energy by 2035.

The path forward for the next decade is clear, NREL found: Build solar farms, wind turbines and batteries as fast as possible. Get solar panels on rooftops, electric cars in garages and electric heat pumps in homes. And invest in energy efficiency and “demand response” programs that pay people to use electricity during times of day when solar and wind power are plentiful.

Crucially, all the paths to 100% clean energy studied by NREL would be capable of keeping the lights on every hour of the year, the researchers say — even on the hottest summer and coldest winter days, even when the sun doesn’t shine and the wind doesn’t blow for days at a time, and even when a wildfire takes down a major transmission line.

That last point is a key one, since it’s a new favorite to bring up among green energy doubters: “What about Texas?” (It wasn’t the wind farms that caused the blackouts.)

The top scientists in the world have taken this from dreamland to reality. There are hundreds of pathways that could take us to 100% renewable. It no longer should be a question of if, but when and how.